The strength of humanity rescued lives

THE NAMES of 10 Slovaks who helped to rescue Jews during the Second World War will be written on the Wall of Honour in the Garden of Righteous in Yad Vashem, at the Holocaust Museum in Jerusalem. 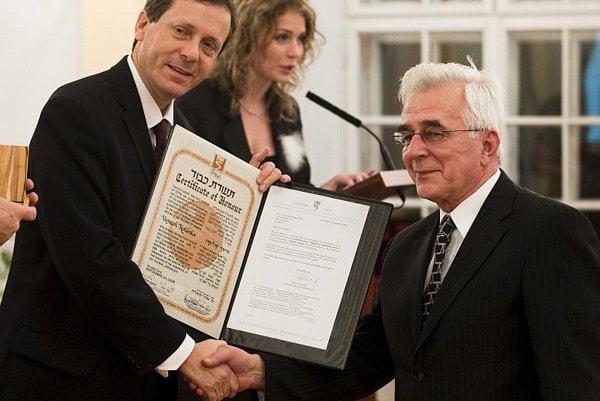 THE NAMES of 10 Slovaks who helped to rescue Jews during the Second World War will be written on the Wall of Honour in the Garden of Righteous in Yad Vashem, at the Holocaust Museum in Jerusalem.

These 10 brave Slovaks played key roles in six personal stories, risking their own lives to save Jewish citizens. None of these heroes lived long enough to see the world appreciate their courage. They all posthumously received the title Righteous among the Nations.

The Righteous among the Nations title is given to individuals by the State of Israel based on the recommendations of a commission headed by a justice of the Supreme Court of Israel.

The Slovaks honoured in 2009 are: Alexander Basár from Prešov, who saved Ernest Herz and his fiancée from transport to a concentration camp; a married couple, Vojtech and Gizela Antals, who along with the Hruškas, saved the Reichmann family; Vojtech Kolenka of Poprad who saved eight members of the Spitzer family; Ján Spišiak, who as Slovak consul in Budapest, saved many Slovak Jews by issuing often falsified documents at great risk to himself; the then-police officer Jozef Tarabus who selflessly helped Dezider Kramer and his family by hiding them and arranging documents; and Pavol Krištof and his wife who hid the Harnfeld family, thus saving their lives.

Descendants of these ten Slovaks accepted the title of Righteous among the Nations from Isaac Herzog, Israel’s Diaspora, Society and the Fight Against Antisemitism Minister and Zeev Boker, Israeli Ambassador to Slovakia.

Herzog stressed for The Slovak Spectator that the world has to understand the lessons from this Holocaust Memorial Day.

“On this earth something happened which didn’t happen ever in humanity,” Herzog told The Slovak Spectator. “One needs to understand how it even managed to erupt and how the regime that took it into its whole philosophy could bring it to the whole nation of Germany.”

“It is exactly such people who prove that in the most difficult chapters of human history, certain people exist who are willing to risk their own lives and safety and thus promote the interests of others over their own,” Boker said during the award ceremony.

Marianne Zach, daughter of Pavol Spitzer, narrated the story of Kolenka’s heroism and of the
Spitzer family for The Slovak Spectator.

Brothers Gejza and Pavol Spitzer owned a delicatessen shop in Poprad. Vojtech Kolenka worked there as their shop assistant. Later, he became the saviour of the entire family.

Kolenka knew Bishop Pavol Gojdič, who last year also received the title of Righteous among the Nations. As a small boy, Kolenka had assisted Gojdič in church masses, Zach said.

“Vojtech Kolenka was like a family member to us, before the war, during the war, and also after the war,” Zach told The Slovak Spectator.

After the anti-Jewish law known as the Jewish Code was passed, prohibiting Jews from owning any property, Kolenka became the owner of the Aryanised property – the shop that the Spitzers were no longer permitted to own. Because Kolenka officially confirmed that he needed the Spitzers for the daily operation of the shop and due to the help of Bishop Gojdič, the Spitzers received a presidential exception and were not deported in 1942. Marianne Zach was 12 years old at that time.

When the harder times came, Kolenka, along with Zach's father, went to beg for help, first to the Catholic Bishop Ján Vojtaššák.

“He refused to receive them,” Zach said. “I do not know why; whether he had no time or whether he did not want to deal with Jews.”

They then addressed the Greek Orthodox Bishop Gojdič, who immediately helped. One of the Greek Orthodox priests also knew Jozef Tiso, president of the Slovak State, which was a satellite of Hitler's Germany, from their school studies together. The priest actually visited Tiso and arranged presidential exceptions for the entire Spitzer family. The presidential exceptions cost 100,000 crowns for each person, which meant 800,000 crowns for the family of eight.

“But this was not enough,” Zach stressed. “That government was so corrupt, as was the environment in Slovakia that we had to pay 100,000 crowns more as a bribe.”


Safe in a Prešov school

Marianne Zach stayed with her sister in Prešov, at the Greek Orthodox Sancta Maria school – this had been arranged by Bishop Gojdič to spare them from potential deportation.

“We lived there as equals with the other students,” Zach said.

When they got their attestations, Bishop Gojdič always came to see the results of every single child.

“I was always officially praised for good results, so he gave me an icon with a personal inscription,” Zach recalled.

Bishop Gojdič received the title of Righteous among the Nations posthumously last year, also as a result of Marianne Zach's testimony.

After August 1944, when the Slovak National Uprising started, German troops invaded Slovakia and started a new wave of deportations of Jews to concentration camps. Presidential exceptions then ceased to be valid.

So the Spitzers found a hideout in the Low Tatras, in the lofts of two woodsmen’ houses, and Kolenka sent them regular supplies, vital for survival there.

During the National Uprising

One winter evening, German troops searched through thirteen houses in the vicinity where the Spitzers were staying. They were looking for partisans who were then hiding in the mountains after the National Uprising had been suppressed. They found partisans in ten houses and set them on fire. The Germans either shot, or detained and later deported to concentration camps, those who jumped out of the fire to escape.

The Spitzers were lucky. Although partisans sometimes stayed in the two houses where they had been hiding in lofts, when the Germans came, no partisans happened to be there, so the houses were not set on fire. The German troops did not find the Spitzers, either, who were well-hidden in the lofts during the raids. As soon as the Germans left, the Spitzers ran from the houses. By night, they returned to gather bed sheets and blankets and began hiding in a tent in the woods. They lived like that for four weeks even though the winter was harsh and there was snow cover reaching to their waists.

“People who had helped us thought that we had long since died, as they could not imagine that we survived in those freezing colds and snow,” Zach recalled.

They had no water, so they melted snow. But remaining thirsty, Marianne and her cousin went to a stream which was so wild and fast that it had not frozen. Marianne sank in the snow and fainted, as she was very weak due to hunger.

“My cousin took me out from the snow and, as we continued, he told me to tilt my head in order not to faint.”

After the war, the Spitzer brothers revived their business in the shop in Poprad and made Vojtech Kolenka their partner.

Since 1963, the Israeli government, through the Yad Vashem Museum in Jerusalem has been awarding the title of Righteous among the Nations to people who were willing to risk their lives to help save Jews during the Holocaust.

Based on personal testimonies and historical documents, more than 22,000 courageous saviours from more than 44 countries have so far been so honoured. The title Righteous among the Nations had been awarded to 474 Slovaks. Now, 10 more individuals will be added to that list of names in the garden in Jerusalem and Slovakia, on a per capita basis, continues to rank among the highest nations in the number of honoured heroes.