MISSING links between the business sector and academia are some of the main drawbacks of the Slovak university environment in comparison with its counterparts in the US and some EU countries, experts often agree. Creating space for private companies to cooperate with universities and become involved in research activities is one of the aims of recent initiatives from the Education Ministry. 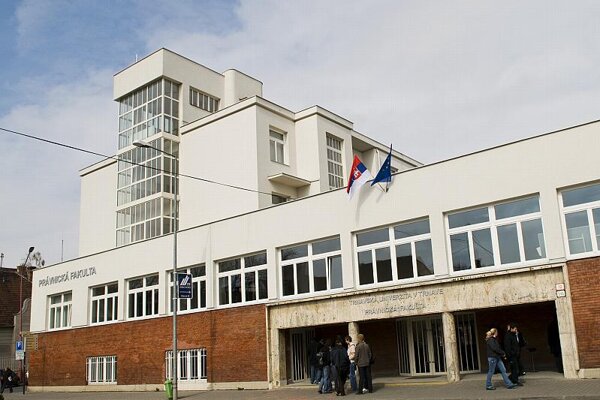 Rules for universities to use their real estate might change. (Source: TASR)
Font size:A-|A+  Comments disabled

MISSING links between the business sector and academia are some of the main drawbacks of the Slovak university environment in comparison with its counterparts in the US and some EU countries, experts often agree. Creating space for private companies to cooperate with universities and become involved in research activities is one of the aims of recent initiatives from the Education Ministry.

On January 21, the Slovak government passed an amendment to the University Act proposed by Minister of Education Ján Mikolaj. The amended act will allow public universities to form joint-stock or private limited liability companies and create joint ventures with commercial companies, with the possibility of receiving state subsidies if the ventures deal with research and science.
The amendment will also make it easier for foreign universities to open branches in Slovakia, as they will be entitled to the same public subsidies as Slovak universities, as long as they gain accreditation in compliance with Slovak law.

Creating links between universities and business

Both entrepreneurs and universities have welcomed the amendment as a positive step in solving some of the problems of university education and scientific research in Slovakia. Establishing private companies which universities will be able to join is positive for universities and for companies, said Martin Krekáč, the president of the Business Alliance of Slovakia.

“In that way universities will be able to find new spheres of activity and develop cooperation with the private sector, which has been absent until now,” he told The Slovak Spectator. “Business people can gain new knowledge, further develop their business activities and discover new people.”
Comenius University (UK) also welcomed the efforts of the Education Ministry to create better material and technological conditions for research and science by allowing the universities to establish research and development centres as limited liability companies or as joint-stock companies.

However, UK's rector, František Gahér, drew attention to some gaps in the proposed legislation, especially regarding limitations in the protection of the property that universities received from public sources or by exchange or purchase after January 2, 2003.

The amendment states that only real estate received by public universities from the state that is invested into a commercial company will not fall under the right of lien and cannot be seized to cover the liabilities of a joint venture nor any other companies or third persons. All state property that was administered by universities, except for certain property specifically listed in that law, had been transferred to the universities on January 1, 2003.

According to Gahér, property acquired after January 2, 2003 continues to fall under the right of lien and thus could fall under execution and become a part of a bankrupt company’s assets. He said the amendment also implies that universities are investing their real property into the companies on a no-cost basis, but in the event of liquidation, the property will only be returned to the university in exchange for compensation.

In that way, if the joint venture goes into bankruptcy, public universities would actually be contributing public resources to the other partners if the university’s share in the company is worth more than the share contributed by the other partners in the final liquidation, said Gahér.
The amendment allows public universities to invest financial resources they received from the state budget into companies, which Gahér believes to be sufficient.

“Real estate owned by universities can be used by joint companies on the basis of rental contracts,” he told The Slovak Spectator.

According to Gahér, the amendment is not revolutionary in allowing the universities to go into business, because they can do that now but using a university’s real property for business activities is the novelty.

Minister Mikolaj spoke about the importance of universities being active in business.

“We are untying their hands,” he said.

Widening the R&D business opportunities creates a legislative basis for linking universities with entrepreneurs primarily in the area of technology transfer, said Gahér. This is where he sees the possibilities for Comenius University in making use of its new rights in the event that the amendment is passed. But he said the transfer of technology only brings a financial effect in the long run and it might be that companies will not be willing to join in such ventures.

“In accordance with its membership in the EU, Slovakia enables foreign universities to gain an equal position with Slovak universities,” Dana Španková, the Education Ministry spokeswoman, told The Slovak Spectator.

“If the aim is to fulfil EU principles about equality of opportunity in providing education in the European space, it can be considered a correct step,” Gahér said in response to a question whether giving the same subsidies to foreign universities as to Slovak universities is right. But he also said that in the short-term it might lead to lowering the quality of the state-awarded diplomas.
“If any foreign universities come [to Slovakia], they will represent competition mainly due to their dumping prices for ‘foreign’ diplomas,” he told The Slovak Spectator. “But maybe I’m wrong and the arrival of branches of good foreign universities will lead to the fall of lower-quality universities in Slovakia.”

In order to qualify for state subsidies, foreign universities will be required to go through the Slovak accreditation process. Once their study programmes are accredited, it will be possible to determine how much money a foreign university is entitled to get from the state budget, said Minister Mikolaj. He does not see it as a bureaucratic measure and has said the whole process should take no more than three or four months.

The amendment would also widen the possibilities for student mobility. For instance, students will be permitted to finish their studies at a university other than the one where they started and students who spend a semester or two at foreign university will be able to transfer their credits to their home university.

R&D to help with the crisis?

As part of its Lisbon Strategy, the EU established a goal of increasing Europe-wide investment in research and development to 3 percent of GDP by 2010. Two-thirds of the sum should come from the private sector. The amendment to the University Act and the Act on Stimuli for R&D, which will give state subsidies and tax relief to companies who invest in science and research, are Slovakia’s response to this Lisbon requirement, Španková, from the education ministry, said.

However, it can also be a step forward to resolving the financial and economic crisis, said Mikolaj.
“Every country with a reasonable policy is trying to reduce the impact of the crisis by investing into education, science and research,” TASR quoted Mikolaj as saying. Investments into research and education could help to reshape production processes and generate added value in his opinion.

Gahér said this is an optimistic scenario. According to him, the private sector has the biggest responsibility towards financing science and research and fulfilling the goals of the Lisbon Strategy.

“I don’t know how this sector will act during the economic crisis,” he said. “I have serious doubts though that by investing into science and research it will lower its responsibility towards the Lisbon Strategy.”

Krekáč said that investments into R&D that depend on the support of the private sector are definitely an interesting challenge for entrepreneurs.

If they get tax relief from the state they would be more willing to cooperate with the universities. However, the process is not a one-way street, he added.

“It will also be important for academia to be more open to new possibilities and to be able to react to them,” Krekáč told The Slovak Spectator.

He agreed that support for education and research can bring added-value into the production process, but that it is questionable whether measures of this kind taken now will have any current impact.

“In this sense we consider the measures of the Education Ministry rather as impulses for the future that will not significantly change the present economic situation,” he said.