BOOSTING both the purchasing power of the population and the incomes of low-earners are among the hopes attached by the government to its latest package of measures intended to ease the impact of the global economic downturn. The government of Robert Fico has now produced three such packages aimed at keeping businesses afloat, helping employers maintain jobs and giving a boost to the slowing economy. 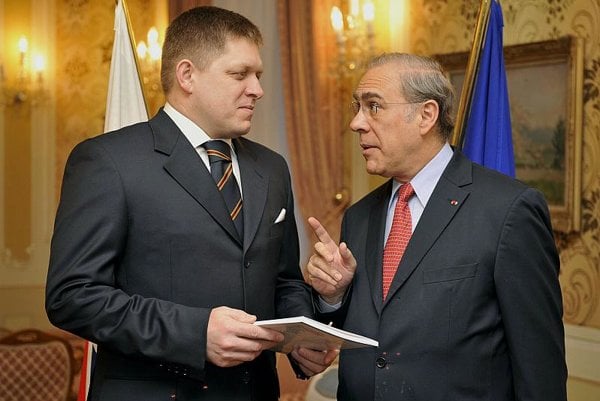 BOOSTING both the purchasing power of the population and the incomes of low-earners are among the hopes attached by the government to its latest package of measures intended to ease the impact of the global economic downturn. The government of Robert Fico has now produced three such packages aimed at keeping businesses afloat, helping employers maintain jobs and giving a boost to the slowing economy.

While observers give the government some credit for trying to help employers save costs if they preserve jobs, they also suggest that cutting payroll taxes would be a more effective way to help suffering businesses.

Economists agree that it is a crisis of slowing consumption, but they also warn that the slowdown is taking place outside Slovakia and so the government cannot solve it here; it can only improve the business environment to minimise the impacts.

“You need extraordinary measures and courage, this is why we welcome steps that are aimed at helping the most vulnerable groups,” said Angelo Gurria, the secretary general of the Organisation for Economic Cooperation and Development (OECD), who visited Slovakia on February 9, and was quoted by public broadcaster Slovak Radio.

Gurria confirmed that the OECD, a club of the world’s wealthiest economies, still expects Slovakia to remain among its best-performing member countries, but he also left no room for upbeat predictions and said that 2009 will be a tough and bumpy year.

“2010 might already be a positive year, but with very slow growth,” Gurria said, as quoted by the SITA newswire.

The government of Robert Fico has been coming up with its initiatives in the light of similar predictions.

The revision to the law on investment assistance, which parliament passed in a second reading on February 11, should free the government’s hands to give financial injections to more businesses between April 1, 2009 and December 31, 2010.

Parliament has also passed a bill cutting the period for VAT refunds from 60 to 30 days, along with an amendment to the income tax law which increases the non-taxable portion of incomes from €3,435 per annum to €4,026.

Self-employed people whose annual income is under €170,000 and who do not have any employees could be exempted from book keeping duties, under the revision, SITA reported.

While observers say they are positive about the fact that the government is taking action and has focused its attention on those who are fight the crisis on the front line, i.e. employers, some continue to advocate a cut in payroll taxes such as social and health insurance contributions.
“We still think that cutting payroll taxes would help the Slovak labour market more,” Richard Ďurana, director of INESS, the Institute of Economic and Social Studies, an economic think-tank, told The Slovak Spectator.

According to Ďurana, cutting payroll taxes would be a flat and non-discriminatory measure, which would help all businesses in all regions of Slovakia, both established and new, foreign and domestic.

The measure would immediately boost their finances and employers would immediately see their labour costs dropping and would thus be able to keep more jobs, said Ďurana; it might even inspire the creation of new positions, he added.

“This measure would also be immune to abuse and cronyism,” Ďurana told The Slovak Spectator. “It is a good tool to eliminate the impact of the strong euro, which is making Slovak labour relatively more expensive when compared to neighbouring countries, the currencies of which have weakened against the euro.”

As for the changes to tax legislation, INESS is positive about them since some leave more money for businesses, while people will see on their payslips that the non-taxable amount of their salary has increased.

“In this way the government intends to support consumption, since it argues that the crisis is a crisis of consumption.” Ďurana said. But he added that the government’s assumption is only partly true: “It is a crisis of consumption, but not in Slovakia. The situation in Slovakia is heavily conditioned by demand in those countries which are our main trading partners; we cannot eliminate the effect of the drop in demand in these countries by increasing governmental spending here.”
This is why it is important, Ďurana said, that the government creates an environment which is adaptable and is allows for the restructuring of the economy here and also abroad which will undoubtedly come.

“In other words, the government cannot fully eliminate the crisis, but what it can do is soften its course and increase readiness for further development,” Ďurana concluded.

The OECD’s Gurria said it is important to concentrate on the labour market which is now badly in need of flexibility.

However, Gurria also added that anti-crisis measures need to be adopted at the right time and should be applied only for a limited period, and that they also should not weaken the country’s focus on its long-term goals.

The largest opposition party, the Slovak Democratic and Christian Union (SDKÚ), said the government’s crisis measures were positive but had not been adopted at the right time.

“Time has been wasted and measures have not been adopted to a sufficient degree and I sufficient depth in order to help people and the economy,” the deputy chairman of the SDKÚ and former finance minister Ivan Mikloš told SITA.

SDKÚ has suggested that the state should grant a deduction of €35 per month from compulsory transfers to health and social insurance funds, which would save money for both employers and employees.

“This move would cost the state about €319 million to €332 million, which is about the same as the government plans to spend in a different, and in our opinion less effective, way,” Mikloš said.
Gurria also suggested that even if the OECD’s long-term policy is that its members keep their public spending under control, times of crisis allow for an increase in deficits, on condition that it is only temporary and deficits are normalised later.

Prime Minister Fico restated that his government wants to keep public spending under control despite its crisis packages. The cabinet has already allocated €332 million to cover the measures.
“We want to keep the deficit under control in order to prevent it from reaching 8, 9 even 10 percent, as it you can see in other countries,” said Fico, as quoted by SITA.