THE GLOBAL economic crisis has not bypassed the steelmaker U.S. Steel Košice (USSK), the largest employer in eastern Slovakia. It has adopted austerity measures to cope with the drop in demand for its products, while hoping that measures by the Slovak government will also help the company through this difficult period. 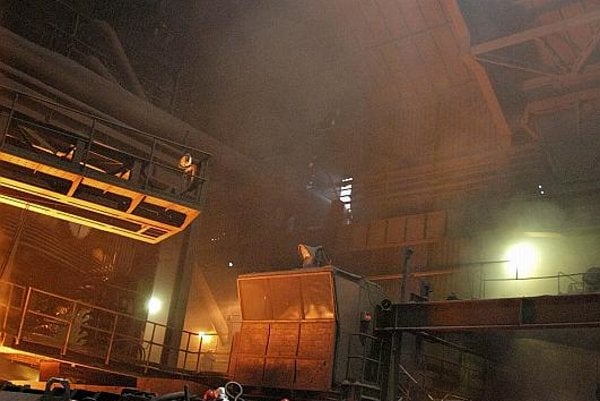 THE GLOBAL economic crisis has not bypassed the steelmaker U.S. Steel Košice (USSK), the largest employer in eastern Slovakia. It has adopted austerity measures to cope with the drop in demand for its products, while hoping that measures by the Slovak government will also help the company through this difficult period.

“The situation for USSK in the market is as complicated as for other companies,” Miroslav Kiraľvarga, Vice President for Management Services and Administration at USSK, told The Slovak Spectator. “The company’s answer is responsible. We are reducing costs and acting and adapting to the situation so that we are prepared for a positive turn.”

After the global financial crisis hit carmakers and cut their demand for materials, USSK as a supplier of steel products to the automobile, machine and electro-technical industry, started to feel the heat of the crisis.

The recent natural gas shutoff delivered another blow to the company. After the government turned off the gas tap to large companies, USSK had to completely halt its production operations. It gradually re-launched production on January 19 after the supply of gas to Slovakia from Russia via Ukraine was fully resumed.

To cope with the impacts of these simultaneous crises, USSK, one of the biggest producers of flat-rolled steel products in Europe, has curbed purchasing of services and products from suppliers. Instead, it is relying more on its primary workers and employees of its daughter companies which total about 14,000. It cut the working week from five days to four beginning February 1 and on the down-day its employees receive 60 percent of their wages. At the end of 2008 USSK did not extend the work contracts of hundreds of temporary agency workers, according to the ČTK newswire.

The economic situation is not yet clear enough for USSK to predict its next steps. But certain measures adopted by the Slovak government may help many companies, including USSK, to manage the current difficult period.

“We find particularly interesting the government’s proposed assistance in paying payroll taxes for employees in the shortened working regime,” said Kiraľvarga. “This is a solution which helps employers and simultaneously will be fair to employees. We regard as equally positively the halving of the deadline for refunding excess value added taxes (VAT) from 60 to 30 days.”

On February 11, the Slovak parliament advanced to the second reading the revision to the law on VAT which will shorten the deadline for refunding excess VAT paid on inputs from 60 days to 30 days.
USSK sees anything that will help keep employment, stimulate creation of new workplaces, launch new businesses and develop and facilitate entrepreneurial activities as worthwhile.

The steelmaker says it will initiate and support every idea which may be an effective tool to cut present costs to keep the company competitive and simultaneously retain its qualified labour force.
“It is likely that employers will also develop other proposals,” said Kiraľvarga. “The current financial and economic crisis will end at some point and companies will need the workers for whom they do not now have enough work. We believe that it is only a question of time, and then demand will grow and it will be necessary to be prepared for this. Our employees have vast knowledge and experience and we cannot afford the possibility of not being able to employ them when it becomes necessary. We want to keep them.”