Reshaping the identity of a city

KOŠICE, Slovakia’s second biggest city, has always lived a bit in the shadow of Bratislava as the capital of a region that despite its great cultural heritage and some key industrial facilities has always lagged behind the western part of the country. As the holder of the title European Capital of Culture (ECOC) 2013, the city, along with its surrounding regions, gets a chance to achieve its potential and become more visible on the European level. 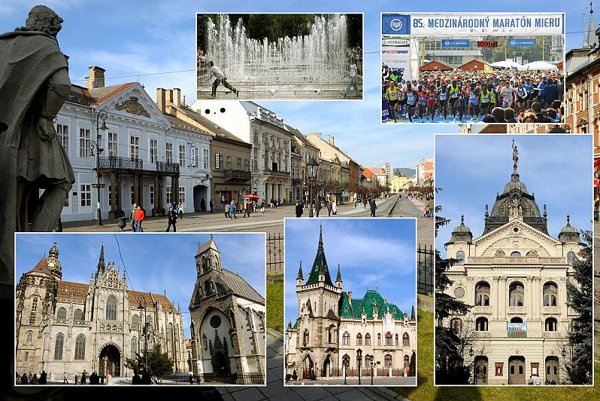 KOŠICE, Slovakia’s second biggest city, has always lived a bit in the shadow of Bratislava as the capital of a region that despite its great cultural heritage and some key industrial facilities has always lagged behind the western part of the country. As the holder of the title European Capital of Culture (ECOC) 2013, the city, along with its surrounding regions, gets a chance to achieve its potential and become more visible on the European level.

Beginning in 1985 with the city of Athens, the ECOC event has been such a resounding success each year since that being chosen is now highly prized. Two cities in different EU member states will now be twinned as Culture Capitals starting in 2011 and both can use resources from the EU to finance their cultural happenings and make other improvements in their cities, the website of the European Commission reads.

Slovakia will twin with France in 2013 and last September Košice was chosen to be the first Slovak European Capital of Culture together with its French counterpart, Marseilles.

Zora Jaurová, artistic director of the Košice – European Capital of Culture 2013 project, sees this selection as a chance to re-create the city’s identity.

“During the course of its existence the project of European cultural capitals has become first and foremost a project for ‘repositioning the city within Europe’,” she told The Slovak Spectator, adding that this is exactly where the project is aimed in Košice.

Košice won the title with its project called Interface 2013. According to Jaurová, the aim of the project is to find a new identity for the city, which at the moment is a mixture of post-Austro-Hungarian, post-communist and post-industrial realities, which only minimally intersect with each other. The city’s new identity will be based mainly on the revitalization of post-industrial zones into environments of progressive culture and creative industry, on the decentralisation of culture into suburban areas and on community development through dialogue between different ethnic and religious groups and through the harmonisation of people with their environment, Jaurová said.
Its status as a cultural capital gives the city not only the chance to create a new image for itself and to introduce new cultural policies, to develop the artistic and cultural potential of its inhabitants and to promote European culture, but also the chance to promote Slovakia’s national culture on a European platform and further develop pan-European cooperation, said Danuta Glondys. She is the director of the Villa Decius Association in Krakow, Poland and a member of the international jury that chose Košice from among the Slovak cities to receive the ECOC title.
Cooperation with Marseilles, the holder of the title together with Košice in 2013, but also with other cities in Europe and particualrly in France is among the priorities of Košice’s plan.
“Since ECOC is a project with a European dimension, supporting international cooperation is a significant pillar in our concept,” Jaurová said, adding that establishing international partnerships between Slovak and foreign cultural bodies is one of the most effective ways to make Košice visible on the cultural map of Europe. So far, cooperation with Marseilles artistic associations Lieux Public and Artonic has been established, but in the future the organisers want to focus on other French cities too.

The city as an interface

The basic idea of the project is the image of the city as an interface – a place for communication between the citizens (users) and culture (the programmes). So the slogan of the project is rather simple: “Use the city!”

“The backbone of the project are revitalization investment plans,” Jaurová told The Slovak Spectator, mentioning plans such as the renovation of buildings that once were military barracks into a modern cultural centre, the modification of former heat exchange stations into cultural and community centres, and bringing the Aisle of Crafts back to life in the city centre. At the same time, Jaurová recalled that ECOC projects are not restricted only to the city, but will affect the whole region and eventually the whole country.

Glondys said Košice was chosen not only for its good proposed programme but also for its implementation capacity and access to sponsors. The title, however, carries with it some significant challenges that the city should address as a capital of culture.

“Among the challenges for Košice – as a European Capital of Culture – is addressing the issue of integration of minorities, especially Roma, into the social and cultural life of the city,” Glondys told The Slovak Spectator, adding that the transformation of Soviet-style neighbourhoods is an additional issue.

“If the city succeeds in addressing these sore spots, it can become a true capital of the region, and as such the centre of Slovakia’s most beautiful part,” Glondys said.

One of the decisive features in Košice’s proposed programme, according to Glondys, was the declared cooperation with other eastern Slovak candidate cities, especially Prešov (only about 40 km from Košice) which was also a candidate with an extremely good programme. Jaurová said the desire to cooperate with the Prešov region is central to their efforts, focusing on grass-roots cooperation with stakeholders in its cultural sector.

The mayors of Košice and Prešov signed a cooperation agreement in June 2008 and there are already several interesting project that have sprung out of the partnership. Jaurová highlighted the Pentapolitana project with a goal to revitalize the historical relations of five eastern Slovak towns: Košice, Levoča, Bardejov, Prešov and Sabinov.

Among the other interesting joint projects is the “Conurbation Košice – Prešov”, designed by young architects from the University of Technology in Košice under the supervision of a Viennese atelier Explicit Architecture. Conurbation loosely refers to a process of bringing together nearby cities or cities with their suburbs to share resources and urban development. The result of this particular project will be a study and design of the development possibilities in the region, Jaurová said.

The European Commission declares that the ECOC project’s aim is to make cities look into the future rather than merely stressing their past. Krakow, the European Capital of Culture 2000, is among the shining examples of a city that benefited from the title. Danuta Glondys, who was in charge of creating Krakow’s successful programme, said the city and its cultural policy changed significantly.
“The international promotion of the city improved a lot, which had an impact on the growth of the city’s economy, thanks to boosting the tourist industry,” she told The Slovak Spectator, adding that the number of tourists increased by 20 percent during the project’s duration. Besides, the city welcomed numerous quality art presentations, developed a coherent cultural policy and revitalised a number of historical buildings, such as the Villa Decius.

“The budget for culture was increased, which meant that cultural institutions could develop and promote themselves also on the international platform,” Glondys said.

Košice is hoping for similar success as the holder of the ECOC title in 2013. Jaurová believes one of the keys to a successful project is finding interesting local and historical particularities, putting them into a European context and thus creating an image of the city for the future. The project should be a sequence of steps leading to this aim.

“Our idea is to create a city which will offer its inhabitants and visitors a wide scale of possibilities to put their own creativity into re-creating the environment in which they live,” Jaurová said. “It is a holistic vision of the city, which understands culture in the broadest sense of the word as the basic engine of transformation.”