THE GOVERNMENT is continuing to maintain its output of anti-crisis remedies intended to protect the country’s economy from the worst symptoms of the global economic slowdown. The state’s crisis council is meeting every week and rolling out lists of measures that its members believe might boost the economy and save jobs. Meanwhile, more and more companies are beginning to feel serious heat from the global economic downturn, and pressure is mounting on the government to find money to help them avoid massive layoffs . 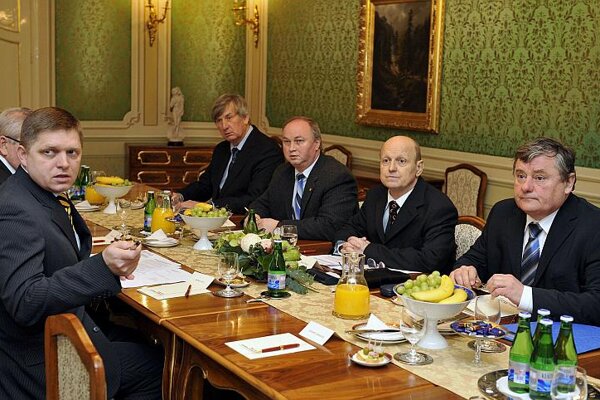 THE GOVERNMENT is continuing to maintain its output of anti-crisis remedies intended to protect the country’s economy from the worst symptoms of the global economic slowdown. The state’s crisis council is meeting every week and rolling out lists of measures that its members believe might boost the economy and save jobs. Meanwhile, more and more companies are beginning to feel serious heat from the global economic downturn, and pressure is mounting on the government to find money to help them avoid massive layoffs .

Over the past three months, the number of businesspeople feeling the impact of the global economic crisis on their businesses has increased: 80 percent of businesses now say they are being affected and 16 percent say they expect to feel effects from the crisis during the course of this year, according to a recent survey by the Slovak Business Alliance (PAS) in cooperation with the Sme daily.

The heaviest burden to have fallen on the shoulders of businesses is the drop in demand fuelled by the distrust ruling the markets, the survey, which was released on February 16, suggests.

“The situation over the past three months has declined and today affects 58 percent of the businesses surveyed,” says the PAS. “The second most serious impact of the crisis is the pressure to lower prices of products and services.”

Today, 47 percent of the surveyed businesses view this as a problem as compared to 25 percent saying so three months ago. Worsening payment discipline by trading partners is listed by PAS as the third most serious problem complicating the lives of businesses.

In February, companies taking part in the survey said that in the event of a prolonged crisis they would have to lay off 4.1 percent of their employees.

Businesses and observers have been calling for cuts to the social and health insurance contributions – also known as payroll taxes – which they have to make on behalf of their employees as one way to provide immediate relief to enterprises and help them maintain employment.

While Prime Minister Robert Fico continues to reject flat cuts to payroll taxes, on February 16 he suggested that his government is now discussing changes to the way payroll taxes are calculated.

The sum of transfers to the social security provider and health insurers should be calculated from a base other than the minimum income, Fico suggested.

“Payroll taxes will either be bound to some percentage from the average wage in the national economy or to the subsistence minimum, Fico told the media, according to the SITA newswire.

The Slovak Trades Union (SŽZ), an organisation of the self-employed, has been involved in the payroll talks.

“Cutting payroll taxes is not only an idea coming from the self-employed, but is something that economists and analysts have been stressing overall,” Peter Masár, president of the SŽZ, told The Slovak Spectator. “At our last meeting with the prime minister it was one of the strongest points we made.”

Reducing payroll taxes would be the best way to help the self-employed who are already in the market and need to survive, said Masár.

He also confirmed that the option of changing the way payroll taxes are calculated has been intensively discussed.

“Our main requirement was that payroll taxes should not grow as fast as they have been growing when calculated based on the minimum wage,” Masár.

The monthly minimum wage in Slovakia increased from €268 to €295 at the beginning of the year, based on government legislation, and thus payroll taxes grew as well, Masár explained, adding that the average wage in Slovakia will obviously not grow much in 2009, if it grows at all.

The government has already passed a measure to support unemployed people who become self-employed, while those who start their own business can get support from the state to cover their compulsory health and social insurance payments for up to two years. The state’s monthly contribution per person would be €41.30; the state expects that it could support 5,000 people in this way.

However, Masár suggests that the priority should be to support the existing self-employed who are already in the market.

“I can hardly imagine that someone will be able to start a new business now and prosper in it,” Masár told The Slovak Spectator. “The market is packed and too often the existing self-employed themselves do not know how to keep their businesses going.”

Masár also worries that the legislation might be abused and suggested that some people could simply close down their existing business and then start a new one for speculative reasons.

“There is a justified concern that people are returning home from abroad and simply do not have jobs to take,” Masár said. “However, my question is: what will they do if the trades are saturated?”
According to Masár, businesses processing metal waste started feeling the effects of the crisis as early as last September; hauliers in the international truck transportation business soon followed.
“They had their activities strongly linked to the automotive producers and with the automotive sector going down, these businesses suffer as well,” Masár said.

“People who had five or six trucks and had their orders bound to this industry now see their businesses collapsing and no one can really tell them when a recovery will come.”

Masár also listed suppliers to the automotive sector and the electro-technical industry, while the self-employed within the construction industry have been affected as well.

He preferred not to forecast any dramatic drop in the number of self-employed but suggested that if the crisis did not ease within a year, this scenario might become reality.

It all depends on how long the crisis lasts

The Fico government has now produced a series of crisis packages intended to keep businesses afloat, help employers maintain jobs and give a boost to the slowing economy.

On February 17, parliament passed a revision to the Income Tax Act which among other things increases the tax-deductible minimum by almost €600 per year. The legislation will increase the tax-deductible minimum from its current level of 19.2 times the subsistence level to 22.5 times, raising it from €3,435 to €4,027 per year as of March 1. The so-called millionaire tax will now be applied to annual income over €15,387.

According to Finance Minister Ján Počiatek, the legislation will improve conditions for small and medium-sized enterprises, the TASR newswire wrote.

Parliament also passed a revision to the law on budgetary rules for local governments, which will make it possible for municipalities and local administrations to use additional resources to cover their expenses, specifically incomes from capital budgets and finances from previous years, SITA reported.

Although observers credit the government with taking action, some of them suggest that the success of these measures will also depend on the length of the crisis.

“If we assume that the crisis in the United States and other developed countries will end within one year, the current anti-crisis measures by the government could be evaluated positively,” said Pavol Boroš, a partner with Centire Business Consulting.

According to Boroš, measures that help preserve the production capacity of the economy, maintain employment and stimulate aggregate demand during the next couple of months - even at the price of state subsidies – could be judged as being meaningful.

Boroš said there could obviously be a discussion about whether the measures in the first package linked to the labour market are efficient enough, or whether increasing the non-taxable minimum as part of the second package will have the desired effect.

“But in principle, these are good proposals, which if they appear effective, can be complemented relatively promptly by additional ones and thus achieve their main goal: to sustain the economy in the best possible condition during a recession among other world economies,” Boroš said.

However, Boroš said he would evaluate the government’s packages in a slightly different light if the crisis does not end in the next six to 12 months, but drags on for longer.

“If the pessimistic scenarios are fulfilled, the current measures by the government will not be sufficient and the time wasted by not adopting fundamental changes might seriously affect us in as little as a couple of months,” said Boroš. “This is why it is very important for the government to decide on which assumption it wants to build its anti-crisis packages.”

If the government, according to Boroš, accepts that the crisis will last longer it needs to seek solutions which do not have just the character of “first-aid packages”. He suggested that in that case measures should be directed at supporting trade, innovation and reducing living costs.

Boroš also said that it is extremely important to maintain the production ability of companies which are still able to export their products. He suggested that Slovakia’s experience has already shown once that cutting direct taxes and payroll taxes can have a positive effect on the business environment.

Slovakia’s agriculture sector might suffer losses up to €282 million due to the impact of the global economic downturn, said Stanislav Nemec, spokesman of the Slovak Chamber of Food and Agriculture (SPPK).

“If we had thought that the economic crisis would only marginally affect us, we are now in its epicentre,” Milan Semančík, SPPK Chairman said in an official release from February 18. “Immediate solutions are needed, otherwise only a torso will remain from the Slovak agriculture.”

According to Vladimír Kočírik, chairman of the Association of Land Owners and Agro Businesses in Slovakia, the state should not only support the creation of jobs in the agriculture sector but also aim at preserving the existing ones.

The Slovak farmers also called on the European Commission to play a decisive role in fighting the crisis in the agriculture sector and re-evaluate its intervention mechanisms.