FROM JANUARY 1 next year vehicles over 3.5 tonnes will no longer use stickers to pay to use highways and first class roads across Slovakia. Instead, Slovakia will be pioneering a satellite-based toll collection system. The company which won a mega-tender to install the network, the country’s first electronic highway toll system, will launch its operation on January 1, 2010.However, the tender has attracted a lot of public and media attention, not only because of its technical aspects but also due to the fact that details of the contract, which is worth hundreds of millions of euros, remain concealed from the public. Watchdog organisations have called for more information. 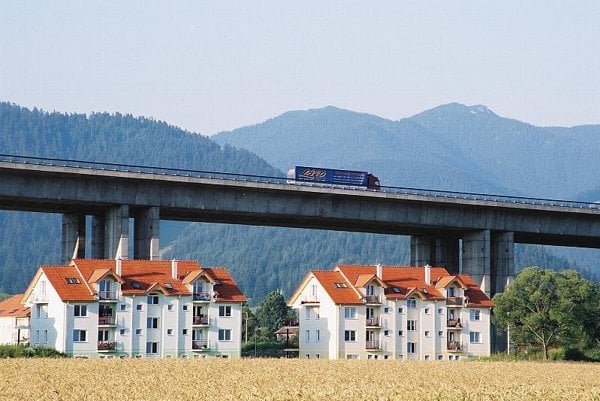 FROM JANUARY 1 next year vehicles over 3.5 tonnes will no longer use stickers to pay to use highways and first class roads across Slovakia. Instead, Slovakia will be pioneering a satellite-based toll collection system. The company which won a mega-tender to install the network, the country’s first electronic highway toll system, will launch its operation on January 1, 2010.
However, the tender has attracted a lot of public and media attention, not only because of its technical aspects but also due to the fact that details of the contract, which is worth hundreds of millions of euros, remain concealed from the public. Watchdog organisations have called for more information.

The long tender process finally produced a winner at last, which is now promising to build a unique tolling system customised to Slovakia’s needs. The SanToll-Ibertax consortium, which last year won the tender with a bid of €716 million excluding value added tax, has since launched SkyToll, which will build and operate the tolling system.

The National Highway Company (NDS) signed a contract with the supplier of electronic toll collection services on January 13 for construction of the system and its operation for 13 years, with possible extension for another five years. The selected provider is to supply the service based on the DBFOT (design, build, finance, operate and transfer) system.

“The electronic collection of tolls in Slovakia is a unique toll project in several respects,” Eva Güttlerová, SkyToll’s spokesperson, told The Slovak Spectator. “The project covers not only highways and dual carriageways but also, to a wide extent, first class roads. Slovakia will be the first country in the world in which the most advanced satellite technology for electronic collection of tolls will be implemented. Such a technology has not before been installed in real operation.”

It is not possible to confirm if this is the case since SkyToll has not revealed any technical details of its solution so far.

“We will provide details about the electronic toll collection system later in 2009; the next press conference is planned for early March,” Güttlerová said.

Nevertheless, already the terms of the tender indicate that the system will be unique in some ways.
“I see the uniqueness of this system as being not directly in its technical solution, because I do not know what that is, but in terms of the tender conditions which set out that this system will for the first time under such a toll collection system cover [but not necessarily charge to use] a network of roads including almost 600 kilometres of highways and dual carriageways and about 1,900 kilometres of first class roads,” Ľubomír Palčák, the director of the Transport Research Institute (VÚD), based in Žilina, told the Slovak Spectator. “The technology employed as well as the technological solution, from an IT perspective, will have to be novel in terms of organisation.”
An additional feature of the system is that it will be possible to extend it in the future.

“In line with requirements of the NDS we are able to introduce the toll collection on any section of road,” said Güttlerová. “The solution of the electronic toll collection system of SkyToll, based on GPS-GSM technology, provides maximum flexibility in order to accommodate increases in the volume of freight transport and extension of the road network in Slovakia.”

According to Palčák, the satellite system to be used in Slovakia could enable relatively easy extension of toll collection on any kind of vehicle as well as to roads of lower categories.

“By using this, Slovakia will avoid problems such as those experienced in the Czech Republic,” said Palčák. “There, a microwave toll collection system was first installed on highways. But now the Czech Republic is building a satellite system to collect tolls on first class roads.”

There will be about 60 distribution and contact points across Slovakia, where drivers will obtain so-called on-board units (OBUs), according to Palčák. Through OBUs the system, via a satellite, will monitor the position of vehicles and automatically calculate the number of kilometres driven on toll roads.

Based on the conditions of the tender, it should take no more than five minutes for a driver to install an OBU, said Palčák. By contrast, in Germany a driver has to visit a specialised fitter to get a comparable unit installed.

Using the OBU, the driver will select the proper category of his or her vehicle so that the system calculates the toll in the correct category.

The final toll for a vehicle will depend on its weight, the number of axles and the type of the engine, allowing more environmentally friendly vehicles to pay lower tolls. The toll will be between €0.06 and €0.21 per kilometre, according to the NDS website.

Tolls on first class roads will be lower than on highways and dual carriageways. Slovakia has decided to launch the tolling system on first class roads to avoid a situation in which heavy vehicles bypass tolled highways by using these roads. Not to burden local companies supplying shops, for example, the Ministry of Transport and Regional Development has exempted roads in towns and villages from payment of the tolls, according to the daily. Thus the total length of roads subject to the toll is about 1,900 kilometres.

The electronic tolling system is likely to result in a significant rise in costs for road hauliers. Those owning vehicles which currently require the most expensive stickers had to pay €929 for a one-year highway sticker in 2008. In 2010 they will pay around €0.20 per kilometre. Thus, the 400-km long route from Bratislava to Žilina and back, if they travelled it every working day, will cost them more than €19,000, a 20-fold increase, the Hospodárske Noviny calculated.

The Association of Slovak Road Transport Operators (ČESMAD) says it cannot yet estimate the exact impact of the new tolling system on Slovak companies. According to Pavol Reich, ČESMAD’s secretary general, it will bring a significant increase in costs for companies which frequently use Slovak roads. But at the same time, Hospodárske Noviny reported, drivers admit that the new system will be fairer because everybody will pay for the kilometres which he or she drives.

Igor Choma, the head of the NDS, has estimated that revenues from the electronic tolling system will be between €166 and €199 million in 2010, the SITA newswire wrote.