AFTER a promising first month of 2009, during which more Slovak movies premiered than during the whole of 2006, local cinematography continues to flourish. 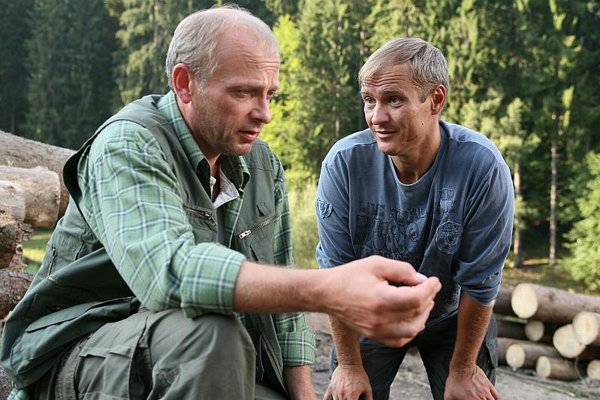 Attila Mokos (left) and Roman Luknár (right) star in Soul at Peace, one of the Slovak films presented at the Berlinale. (Source: Courtesy of Forza)
Font size:A-|A+  Comments disabled

AFTER a promising first month of 2009, during which more Slovak movies premiered than during the whole of 2006, local cinematography continues to flourish.

From February 5 to 15, visitors to the 59th Berlin International Film Festival were able to see for themselves how far Slovak film production has expanded over the last few years. For the fourth time in a row, several representatives of the country's film-making scene were present at the European Film Market (EFM), an integral part of the famous festival - also known as the Berlinale - that each year attracts more than 6,400 film professionals. And although no Slovak movie was in the running for the prestigious Golden Bear award, as many as six Slovak films were shown as part of the festival.

Since 2006, Slovakia, the Czech Republic, Poland, Hungary and Slovenia have shared a common stand at the Berlinale, entitled Central European Cinema. It serves as a platform for film professionals to foster business contacts and share information about the latest productions.

“This association of five countries has turned out to be very beneficial for all partners and we intend to continue with this model,” said Alexandra Strelková, director of the National Cinematographic Centre, a part of the Slovak Film Institute. “The respective countries have always been closely linked as far as cinema is concerned, mainly through various co-productions. Of course, we all primarily want to present our own country, but we have found, I think, a good form of cooperation that ensures that there is enough room for everyone.”

According to Strelková, the fact that Slovakia did not have any film in the Official Competition section was no tragedy; the EFM “market screenings” that featured six Slovak movies, of which four were co-produced, were also of great importance.

Interestingly, only two of the screened pieces, Soul at Peace (Pokoj v duši) by Vlado Balko and Tobruk by Václav Marhoul, had already been premiered in Slovakia. Film professionals, producers and journalists therefore had the opportunity to look “behind the scenes” and see the other films before they were completed.

All these will hopefully break through thanks to their promotion in Berlin, Strelková said. She also expressed her belief that the newly-created Audiovisual Fund and Slovakia’s recent entry to the eurozone would contribute to the local boom in cinematography.

“For both the national and international film industry, the two facts are certainly crucial,” Strelková told The Slovak Spectator. “But of course their real impact, as well as the results of our meetings at the Berlinale, will emerge only gradually.”
Action! But not immediately...

Veronika Skořepová, chief of production for Soul at Peace, agreed with Strelková that even a festival as busy as Berlin cannot yield results straightaway.

“It would be naive to believe that one can, within five or six days, arrange for one’s movie to be immediately distributed throughout the world, sent to the most prestigious film festivals and represented by a strong sales company,” she stated. “However, several important figures attended the Soul at Peace market screening and, given the fact that over 500 movies were presented at the EFM, the attendance was more than satisfactory. Our current priority is to have the film premiered in the Czech Republic and Poland.”

Soul at Peace tells the story of Tóno, who returns to his native village after five years in prison. A stranger to his wife and small son, he cannot find his way back into normal life.
According to the official synopsis, “set against untouched mountain scenery, [Soul at Peace] portrays phenomena that are typical for central Slovakia: patriarchal families, problems with poachers, racial discrimination and lumber theft; it also illustrates a strong tradition of family bonds, faith, friendship and love, and bears all the features of a classic drama”.

Premiered on January 29, it attracted around 8,400 viewers during its first weekend, and has so far sold more than 42,000 tickets. This makes the film one of the 10 most successful Slovak movies since the country's independence in 1993.

The high attendance may partly be due to the overwhelming popularity of the song Soul at Peace recorded by famous Slovak singer Jana Kirschner. As Slovak movies rarely use soundtracks as part of their promotion strategy, some people erroneously ascribe the song too important a role, Skořepová said.

“I often meet people who say ‘Of course you are successful, you have a song that everybody knows and it is only natural that its fans want to see the film’, but nobody has asked what would have happened if the song had not become such a hit,” she observed. “Attendance could even have suffered if the single had been a flop.”

The content of a film remains its most important aspect, whether it has a good soundtrack or not, Vlado Balko, the director of Soul at Peace, said, adding: “My movie depicts Slovakia and its society in an authentic way, and shows what we are like instead of what we want to be like. This has always been my priority.”