MANY had hoped that mass layoffs were a thing of the mid-1990s, when Slovakia’s formerly centralised economy underwent painful restructuring. But the current global economic crisis has brought them back in full force. From last October to February 15, employers in Slovakia reported 156 mass layoffs to labour offices, which could result in the loss of 15,300 jobs in forthcoming months, according to the country’s labour authority. 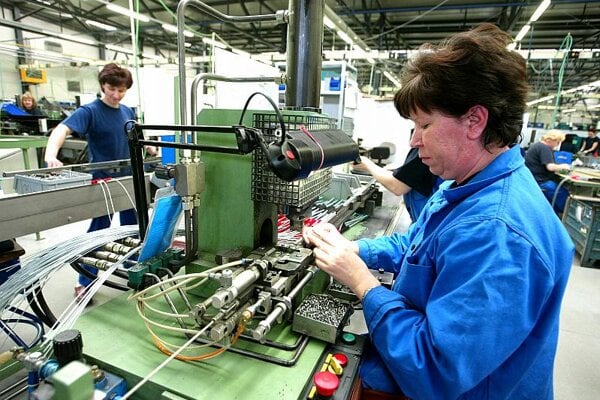 MANY had hoped that mass layoffs were a thing of the mid-1990s, when Slovakia’s formerly centralised economy underwent painful restructuring. But the current global economic crisis has brought them back in full force. From last October to February 15, employers in Slovakia reported 156 mass layoffs to labour offices, which could result in the loss of 15,300 jobs in forthcoming months, according to the country’s labour authority.

By late January, the jobless rate reached 9.03 percent, securing Slovakia’s unenviable position in the upper reaches of Europe’s unemployment chart. At the end of the month, labour offices registered 239,252 jobseekers available to take up work immediately, 20,332 more than in December 2008. As of February, there were 9,100 job vacancies on offer at labour offices but, in addition to the notified mass layoffs, 296 businesses reported 9,500 jobs as being insecure, Slovakia’s Labour Office reported.

However, the growing unemployment rate is a global concern, with international labour authorities warning that the crisis could produce millions more unemployed.

Labour market watchers say the turbulence that is rocking the market is causing a hiring freeze and uncertainty. They also say that predictions that the unemployment rate has already peaked are premature and express caution about estimates of when the situation might be expected to ease.

On a brighter note, human resources professionals say that there will be more qualified labour available, allowing some employers to hire the best hands and best minds, and that businesses will be forced to carry out changes that some have been postponing because they lacked sufficient motivation before now.

The Slovak government has already produced crisis packages aimed at the labour market in order to ease the effects of the crisis and try to inspire employers to preserve jobs.

“No state alone can stop or solve the global economic downturn, but [they] should be taking steps to ease its impacts,” the state secretary of the Labour Ministry, Emília Kršíková, said after a February 25 meeting of the country's crisis committee.

According to Kršíková, the steps that Slovakia has been taking are in absolute harmony with measures adopted by other countries in Europe. She estimated the costs of these steps in Slovakia at €140 million.

Kršíková suggested that of all the announced layoffs, only a fifth have so far been carried out.
Since, October 16,538 positions have been declared endangered, but so far only 3,572 of these employees have been laid off.

As for estimates about how this number might change in 2009, Kršíková told The Slovak Spectator that no one can really tell how intense the crisis will be or how long it will actually last.

However, she added that the Labour Ministry does not expect any overly dramatic developments.

Based on daily monitoring by trade unions and employers’ reports to labour offices, the most affected areas are the machine, automotive, food processing and chemical industries, a spokesman of the Confederation of Trade Unions (KOZ), Otto Ewiak, told The Slovak Spectator.

Kršíková however suggested that the retail and services sectors have shown some more favourable developments.

According to Ján Sihelský, the general director of he National Labour, Social Affairs and Family Office (ÚPSVAR), the effects of the crisis have not yet climaxed.

“Signals from associations of employers and the employers themselves point to a worsening situation among businesses,” Sihelský told the public broadcaster Slovak Television, adding that his office thus expects unemployment to rise slightly in February.

However, in March, when the new anti-crisis legislation should come into force, Sihelský expects the pressure on the labour market to ease.

Unemployment has grown in all regions, with Prešov, Banská Bystrica and Trnava Regions being affected most.

Human resources professionals expect stagnation in the labour market with the number of job applicants increasing and most predicting that if there is any thaw coming, it will not arrive sooner than the second half of the year.

“Firms will also reduce working hours and freeze the growth of wages or even cut salaries,” Lucia Burianová of the Profesia job server told The Slovak Spectator in early February. “We cannot estimate when the turning point will come, but we hope that the labour market will recover quickly because the pace of current changes is unprecedented.”

In the second half of 2009 the situation might start getting back to normal, according to Lucia Molnárová of recruitment firm Manpower. She also expects firms to keep a much closer eye on their expenses and competition for jobs to grow stronger, with more qualified candidates having better chances.

Zuzana Weberová from CPL Jobs agrees that the second half of 2009 is the soonest that the labour market can be expected to show more stability, while the first half of 2009 promises to be the toughest period, with a lot of firms announcing layoffs.

“We can also expect a growing influx of unemployed people into regions where there are still some jobs on offer,” she added.

The crisis could prompt the start of certain corporate programmes which firms have needed to implement for some time but for which managerial will was formerly lacking, Jana Zedníková of temporary employment agency Trenkwalder, told The Slovak Spectator.

“For firms which have long suffered from a lack of qualified labour and essentially employed almost anyone who applied for a job, the crisis will help to replace weaker employees,” Zedníková added.

Ľuba Lesná contributed to the report