SLOVAKS will soon be eligible for a car-scrapping bonus if they replace their old car to buy a new one: this is one of the ways that the government of Robert Fico is planning to assist the ailing car industry in Slovakia, which is home to three giant carmaking plants run by Kia, Volkswagen and PSA Peugeot-Citroen. The state may also help people to pay their mortgages if they lose their jobs as a result of the crisis, an idea which is being backed by the country’s bank association. 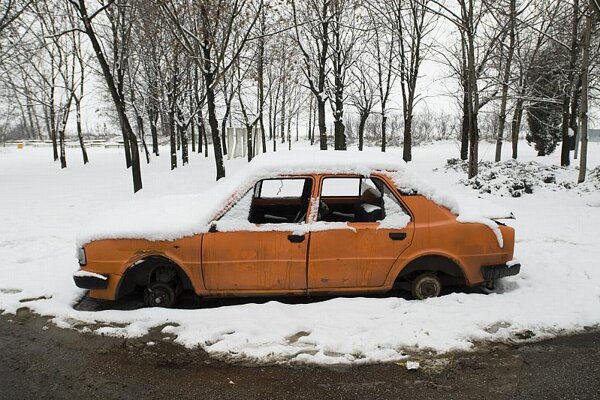 SLOVAKS will soon be eligible for a car-scrapping bonus if they replace their old car to buy a new one: this is one of the ways that the government of Robert Fico is planning to assist the ailing car industry in Slovakia, which is home to three giant carmaking plants run by Kia, Volkswagen and PSA Peugeot-Citroen. The state may also help people to pay their mortgages if they lose their jobs as a result of the crisis, an idea which is being backed by the country’s bank association.

However, the parliamentary opposition parties have again questioned the Fico cabinet’s priorities in dealing with the crisis, and have pressed for a fourth time for the ruling coalition to hold a special parliamentary session to discuss alternative approaches. Opposition plans are dominated by cuts to direct taxes and payroll taxes, which it argues are a more effective way to help the economy.

Despite the speaker of parliament, Pavol Paška, convening a session on March 6, the opposition’s chances of winning support for its proposals looked slim since the cabinet rejected them at its session on March 4. The prime minister went so far as to call opposition proposals ‘sabotage’.

Owners of cars which have been in use for the past ten years and were registered on the territory of Slovakia before December 31, 2008, might be soon eligible for a €2,000 bonus to have them scrapped, providing they buy new ones. The cabinet decided on March 4 that the minimum sum the state would provide would be €1,000. If a car dealer were to contribute a €500 discount, the state would match it by paying another €500 of the buyer’s final bill.

The plan is expected to cost the state €33.2 million.

“I think it is a good attitude, rivalry among car dealers should work,” said Economy Minister Ľubomír Jahnátek, as quoted by the SITA newswire.

People targeting the state bonus, however, should bear in mind that it will only apply to new cars with price tags under €25,000 including VAT.

Not only private individuals but also the self-employed and legal entities will be eligible for the scrapping bonus.

“We wanted to link the stimulus to a revival in sales as well as the liquidation of old cars,” Jozef Uhrík, president of the Slovak Car Industry Association, told public broadcaster Slovak Television.

“I think that we are managing to achieve that through these measures.”

However, there have been some doubts expressed about whether the car-scrapping bonus will actually help the car giants that have plants in Slovakia.

“Even though the measure might boost car sales in Slovakia, this will have practically no impact on the Slovak automotive industry since only a negligible percentage of the cars sold in Slovakia are produced here,” Ivan Štefanec, an MP for the opposition Slovak Democratic and Christian Union (SDKÚ), told The Slovak Spectator.

“Besides, it is really hard to imagine that a man who loses his job is going to buy a new car,” he added.

The Finance Ministry state secretary, Peter Kažimír, told SITA that 70,000 cars were sold in Slovakia last year, of which 60 percent were to households.

Sales projections for the first few months of this year indicate that there could be a 30 percent drop in sales to private households, to some 27,000 cars, he said.

Meanwhile, the country’s Economic Crisis Council gave its support to a plan for the state to help people who find themselves unable to pay their mortgages after losing their jobs. The Slovak Banking Association (SBA) supported the idea in its initial stages and a memorandum between the SBA and the government has now been signed confirming the SBA’s backing for such a scheme.

The Finance Ministry has been given the task of preparing the details and should submit draft legislation by the end of March, Marcel Laznia, a spokesman for the SBA, told The Slovak Spectator.

Kažimír, of the Finance Ministry, told the Sme daily that when clients report to a bank that they are unable to pay their mortgage the bank should be amenable to adjusting payment schedules for a whole year rather that just a couple of months, and should restrain from “taking the roof from over a client’s head”.

“The SBA agrees with the proposed support for bank clients,” Laznia said. “The condition of the association, however, is that the decision to participate will be voluntary for the banks and for a limited time period only.”

According to Laznia, the SBA is interested in clear and simple rules of assistance so that they are not abused.

“In order to eliminate eventual moral hazard, the association proposed that assistance is limited to loans provided up to the end of 2008 only,” said Laznia.

As for the burden of costs, these will first be carried by banks and subsequently by the state, he added.

However, the SBA also said that this form of assistance is still generally avoidable and the association regards it first and foremost as a preventive measure.

“The data we have today does not suggest that there will be a significant increase in unpaid loans,” Laznia said. “However, we expect that with the worsening financial situation some clients may encounter difficulties paying off their loans.”

The opposition has said it would like to see direct taxes trimmed to 16 percent, a reduction in payroll taxes (such as compulsory public health and social insurance contributions), unified collection of direct and payroll taxes, and a reduction in public spending, Štefanec said.

“We have been offering these proposals since October 17, 2008, and we have proposed a parliamentary session to deal with the crisis four times,” Štefanec told The Slovak Spectator. “As a result of the ruling coalition’s refusal to discuss this issue, which is an unambiguous priority for our country, we are the last parliament in Europe which has not yet discussed it.”

However, the Economic Crisis Council turned down the opposition’s proposal to cut the flat-rate tax from 19 to 16 percent.

“Businessmen realise that it is absolutely counterproductive to come up with such a proposal at this time and it makes no sense to discuss it at any level,” Fico said as quoted by SITA.

Fico used the possibility of a shortfall in tax revenue of €1.66 billion to argue against the opposition’s proposal to cut the tax rate to 16 percent. According to the prime minister, estimates of tax revenues for 2009 have already fallen from €10 billion to €9.3 billion.

“They [the opposition] press us to keep the deficit at 3 percent, and offer us, on the other hand, solutions that would mean €1.66 billion less in the case of all tax cuts and €664 million in the case of an income tax cut,” Fico said.

Štefanec responded by pointing to the overall impact of the introduction of the flat tax and a related 6-percent tax cut in 2004. This had meant, he said, a boost for the economy, higher revenues for the state budget, the beginning of a growth in people’s real wages and also the creation of new jobs, he added.

Štefanec disagreed with Fico’s argument, pointing out that total income from direct taxes in the state budget stands at €2 billion. The cut the opposition proposed might result in a shortfall of approximately €300 million, he said. He said that if the recent controversial tender for an electronic road toll system (see story on pg 2), which was won by the highest bidder, had been carried out effectively and on time the shortfall could have been met immediately.