THE STATE is to grease the wheels of the country’s rail freight company, which has been sagging under the weight of the global economic crisis. 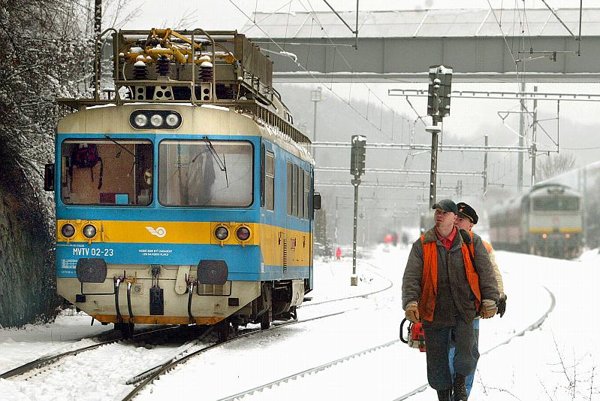 THE STATE is to grease the wheels of the country’s rail freight company, which has been sagging under the weight of the global economic crisis.

Železničná Spoločnosť Cargo Slovakia (Cargo Slovakia or ZSSK Cargo) will receive €166 million to compensate for a dramatic drop in its revenues which has resulted from its ailing industrial clients abandoning their freight transportation deals.

Cargo Slovakia said that due to reduced production in several industrial sectors it has already seen a shortfall in January revenues of about €16.6 million compared to revenues in January last year.

While Prime Minister Robert Fico said that his government could not allow people working for Cargo Slovakia, which is state-owned, to lose their jobs, the opposition said that it was the Fico team that contributed to the company’s decline by terminating the plan to privatise it which had been on the agenda of the previous government.

The cabinet approved the aid on March 4, 2009, after ministers acknowledged the company’s grim prospects.

Of the two options considered – namely an increase in the company’s share capital or repayable financial aid - the second was chosen.

“Cargo Slovakia reported a huge shortfall in its output due to the crisis, paradoxically after 2008, when it made its first-ever profit,” said Prime Minister Robert Fico in late February, as quoted by the SITA newswire. “The crisis literally degrades this company.”

The crisis started taking its toll on the company as early as August 2008. It transported 44.5 million tonnes of goods in 2008 as opposed to the 48.1 million tonnes projected, a 7.5 percent shortfall, of which 70 percent was recorded in November and December 2008.

“The severity of the negative trend will depend on real output and transportation demands,” Cargo Slovakia spokesperson Margaréta Grecová told The Slovak Spectator.

The transportation of coal, iron ore, metal and scrap has declined most because of changes in the production by Cargo’s largest customers, such as Slovnaft, Siderit and Elektrárne Vojany as well as by steelmakers U.S. Steel Košice, Arcelor Mittal, Třinecké Železárny, Dunafer and Železiarne Podbrezová.

Cargo Slovakia was created in January 2005, when the state broke the national railway company Železničná Spoločnosť (ŽSSK) into two joint-stock companies: Železničná Spoločnosť Slovensko (ZSSK) for passenger transport and ZSSK Cargo for cargo transportation. The reason for the move was that the cargo business, which at that time was profitable, was being used to fund the company's passenger transport services, a cross-subsidy that European Union rules does not allow.

Former finance minister, and currently MP for the opposition Slovak Democratic and Christian Union (SDKÚ), Ivan Mikloš outlined the ways in which, he said, the government of Robert Fico had contributed to Cargo’s worsening situation.

“Firstly by cancelling the privatisation, from which we could have raised Sk14 billion [€465 million], since an Austrian railway transporter was interested in participating,” Mikloš told The Slovak Spectator.

According to Mikloš, the Austrian company later invested in the Hungarian rail cargo transporter and logically redirected the flow of goods from Ukraine and Russia westwards through Hungary to Austria.

“The second reason is that there was an active wasting of funds in Cargo,” Mikloš said.

He explained that Cargo posted weaker economic results as early as 2007, at a time when the country’s economy was growing by as much as 10.5 percent, which Mikloš said was evidence that it is not just the crisis which has led to Cargo’s problems.

Mikloš also listed the government’s plan to build a broad-gauge railway as a contributing factor, suggesting that prior to the crisis the railways were being used at 30 percent of their capacity and now the government wants to build a new one.

“I would immediately cancel this project,” Mikloš said.

On February 18, the Slovak government approved a joint plan with Russia, Ukraine, Slovakia and Austria to prepare and construct a broad-gauge railway linking Košice, Bratislava and Vienna. In the initial stage of the project the parties will elaborate a feasibility study and, according to Transport Minister Ľubomír Vážny, if the study, due in June 2009, is convincing enough Slovakia will support the broad-gauge rail plan.

Asked about the greatest challenges facing Cargo, spokesperson Grecová mentioned competition from road transporters, of whom she said there were currently an excess, resulting in price dumping in many cases. She also pointed to competition from private railway transporters and the strong drop in shipments by the metals sector.

“Even in this critical situation, with a 40 percent drop in output and revenues from transportation, the challenge for Cargo for the upcoming period is to gain transportation deals for wood and prepare for the installation of the electronic highway toll,” Grecová told The Slovak Spectator.

In Slovakia only 18 percent of goods are shipped via rail. Cargo attributes this fact to the changing structure and orientation of the country’s economy such as the increase in the share of added-value production. However, Grecová also listed what she called the differing business conditions for railway and road transporters as a contributing factor.

“As long as this imbalance is preserved, we cannot always provide competitive services in the market,” Grecová told The Slovak Spectator. “In this area, road transportation has an unambiguous advantage, which is reflected in its pricing policies.”

Slovakia’s railway infrastructure makes transporting freight on it one of the most expensive routes in Europe, which is a key factor of the declining competitiveness of Slovak railway transporters, Grecová said.

Cargo says one solution could be to harmonise the share of the costs covered in Slovakia by the state budget with the surrounding countries.

The plans to privatise Cargo collapsed in February 2006 after the final bids had already been submitted and a winner recommended. The then ruling coalition consisting of the SDKÚ, the Christian-Democratic Movement (KDH) and the Hungarian Coalition Party (SMK) suspended privatisation plans amid irreconcilable conflicts within the ruling coalition which ultimately led to early elections. Fico’s Smer party said at the time that it would have pushed for the prime minister’s dismissal if the government had made any attempts to complete the sale of Cargo.

Plans to privatise Cargo in 2005 were interpreted as a sign that the railway transport market would be liberalised; observers predicted that private ownership of Cargo could have been a profitable investment for those transporting goods to the east, especially Ukraine and Russia.

At the time, ŽSSK was among the biggest non-financial companies in Slovakia. With a staff of more than 19,000 employees, it was the second biggest Slovak employer. ŽSSK itself was established when the former railway company Železnice Slovenskej Republiky (ŽSR) was separated into the current railway network operator (which retained the ŽSR name) and transport company (ZSSK).

Ľuba Lesná contributed to this report.