THE IMPACT of the global economic downturn is the biggest problem bothering the regions of Žilina and Banská Bystrica which comprise the central part of Slovakia. It has led to higher unemployment and lower investment. In response, both regions are taking measures to ease the effects of the crisis. 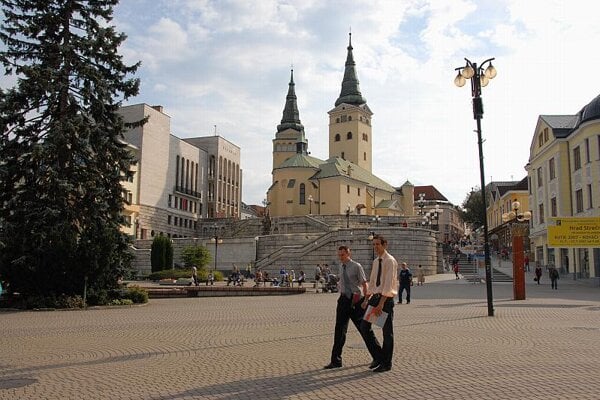 The centre of the city of Žilina (Source: Jana Liptáková)
Font size:A-|A+

THE IMPACT of the global economic downturn is the biggest problem bothering the regions of Žilina and Banská Bystrica which comprise the central part of Slovakia. It has led to higher unemployment and lower investment. In response, both regions are taking measures to ease the effects of the crisis.

The Slovak Spectator spoke to the heads of Žilina and Banská Bystrica Regions, Juraj Blanár and Milan Murgaš respectively, about the biggest problems facing their regions, the use of EU funds, as well as the local development of tourism.

TSS: What are the biggest problems or challenges that your regions are currently facing?
Juraj Blanár (JB): One of the biggest challenges is to mitigate the impacts of the global economic downturn and eliminate its aftermath in Žilina Region (ŽSK). However, to achieve this goal it is necessary to connect the national level represented by the Slovak state government with the regional and local levels, and to jointly look for solutions. Villages or towns cannot – nor can regions themselves – seriously influence the current development within their areas of responsibility; it is really an issue of willingness to cooperate and the synergic impact of all stakeholders in Slovakia.

In spite of this, we are constantly working on completion of the transport network in the region, as this will at least partially solve the problem of increasing internal disparities within Žilina Region.

Milan Murgaš (MM): Certainly the biggest problem currently is the global economic crisis. The engineering and wood-processing industries have a long tradition in our region, and it is these industries that have been hit hardest of all. The Banská Bystrica Region (BBSK) helped found the first Slovak engineering cluster, and this initiative has proved to be the right approach.

Concentrating crucial businesses has helped us to overcome serious economic impacts and through the cluster we want to draw attention not just to the engineering industry, but also to the overall situation of the economy in our region.

TSS: How do ŽSK and BBSK use EU funds when solving these problems? What are the most important projects in which you have used EU funds?
JB: Žilina Region will use the biggest proportion of EU structural funds to build the transport infrastructure of the second and third-class roads and to improve their accessibility. Within the Regional Operational Programme, Žilina Region filed applications for a financial grant amounting to €20.8 million. In order to improve the condition of buildings and modernise the equipment of secondary schools under our administration, we applied for a financial grant of about €12.6 million, while we have already approved projects amounting to about €5.9 million. Of course, we plan to renew and modernise the facilities rendering social services. We have submitted applications for financial grants of about €23 million to modernise and renew the medical facilities in Žilina Region.

All resources acquired for these activities will help improve the services provided by the Žilina Region. If implemented in the coming years, they will also help in keeping the level of employment in the Žilina Region.

Apart from investment activities, the Žilina Region has joined four so-called non-investment projects, which are aimed at supporting business development and supporting small and medium-sized businesses, developing innovations and forecasting further development in the regions of central Europe, in order to implement joint strategic activities.

MM: In connection with the initiative mentioned above, we have prepared projects to present the region, to educate employees, and to allow international networking. In the last programming period – 2004 to 2006 – BBSK was the most successful region in drawing resources and signing contracts from EU structural funds, at more than €350 per capita. We want to continue this trend, and are organising public education and consultancy to persuade not only the public but the private sector that, despite some bureaucratic issues, it is worth applying for EU funds. Infrastructure projects are among the most important – roads, sewage water treatment plants, but also construction of tourism facilities, ski-lifts, etc.

TSS: In what ways has the current economic crisis affected ŽSK and BBSK? What tools are you using to try to eliminate impacts on the regions?
JB: The weak diversification of the economy in a region with a high share of facilities in the automotive industry, which is – also due to the globalisation of economies – quite sensitive to the current financial and economic developments, causes problems also in Žilina Region. A considerable reduction in production by car manufacturers – in Žilina Region, it is specifically KIA Motors – has automatically been reflected in lower production by suppliers in branches like the metalworking and machine industries. Currently, we are able only to guess the specific impacts on the regional macro-indicators, such as the regional GDP. Prognoses made for the whole of Slovakia estimate economic growth for 2009 at 2.1 percent, but there are also lower or even negative estimates.

The Slovak Statistics Office measured a decline in sales in industry of 17.5 percent year-on-year in December 2008 and this has been the biggest decline in the history of Slovakia. The largest share of this decline has been in the automotive industry with a drop in revenues of 37.7 percent.
Of course, this leads to an increase in unemployment. Registered unemployment in Žilina Region rose by about 1 percentage point (from 5.36 to 6.20 percent) between September 2008 and December 2008, and the current situation shows that this negative trend will continue. The districts of Bytča, Dolný Kubín and Tvrdošín recorded registered unemployment higher than the Slovak average of 8.39 percent in December 2008; in September 2008, there were no districts in Žilina Region with unemployment higher than the national average. Barely under the national average are the districts of Kysucké Nové Mesto and Turčianske Teplice.

A decrease in investments and stagnating, or even decreasing, interest in innovations are related to the current economic situation.

MM: In drawing up its draft budget for 2009, Banská Bystrica Region has already taken into account the impact of the economic downturn, and the region’s budget, approved in December 2008, was only €96,250 higher than actual spending in 2008. However the budget did not count on the amendment to the income tax law which has, among other things, increased the non-taxable part of incomes. This could mean, according to calculations by the Institute of Financial Policy at the Finance Ministry, that the aggregate income tax paid by private individuals will be lower by €148.63 million. The share of this income tax belonging to Banská Bystrica Region could thus fall by about €5.3 million.

We have already taken this fact into consideration in preparing the budgets of organisations which are administered by Banská Bystrica Region.

TSS: What activities have ŽSK and BBSK undertaken to attract more investments?
JB: By the end of March, we will have prepared a Catalogue of Investment Opportunities in Žilina Region, produced in both a print and internet format. In this way potential investors will be able to get all the necessary information about more than 100 suitable parcels of land and buildings in the districts of Žilina Region.

We will present the catalogue in April at the most important investment and construction fair in Central Europe, the URBIS INVEST fair in Brno in the Czech Republic. Accepting the acute need of business, educational and research-development institutions within our region, we have prepared the launch of a web portal about innovations.

On April 2, 2009, we will also hold the third year of a conference called Innovative Development of Regions, where the results of our competition for innovation awards will be announced.
The winners will get prizes for Innovation in Žilina Region 2008 in two categories: Small and Medium-sized Businesses and Regional Development.

MM: BBSK has cooperated with all relevant institutions which can present our region and attract capital here. We cooperate with SARIO [the Slovak Trade and Investment Development Agency], SOPK [the Slovak Chamber of Commerce and Industry], the Economy Ministry, but also have separate activities to attract investors. Every year, we take part in exhibitions and events in Slovakia and abroad. In 2008, we organised – in cooperation with SARIO – an international cooperation exchange in Banská Bystrica, where more than 30 foreign delegates took part. The purpose was to instigate specific partnerships and joint co-operation between local and foreign businessmen. The most promising sectors in the region are the metallurgy, IT, wood-processing, chemical, and engineering industries.

TSS: ŽSK as well as BBSK are very attractive regions for tourists. How do Žilina and Banská Bystrica Regions support the development of tourism?
JB: To fulfil the needs of travelling and tourism, Žilina Region makes presentations about our tourism opportunities at seven important travel fairs across Europe. This year, we will also organise three informational trips for foreign tour operators called Discover the Žilina Region – the Gem of Slovakia. Our aim is to attract new clients from abroad into the regions of Liptov, Orava, Turiec, Kysuce, and Horné Považie. Due to a very good response last year, we are preparing the second year of a regional conference about tourism, with international participation, after the
end of the summer season.

Žilina Region is the third most popular tourist region of Slovakia. One of its problems is the dilapidated state the markings showing tourist walking paths as well as bicycle trails. So we are preparing to renew the markings on these paths and trails which significantly support the development of tourism in our region. In 2009 we want to renew the markings in regions of Turiec, Považie and Liptov. During the year we will also prepare a project to obtain support from EU funds to renew markings on paths and trails in regions close to borders – Orava and Kysuce. Žilina Region is also endeavouring to link bicycle trails so that all of them end at Budatín Castle. Our goal is to carry out the greater portion of these activities in spring so that these trails are ready at the beginning of this summer season.

MM: Through the activities of its Department of Tourism and Cultural Heritage, Banská Bystrica Region supports business entities; indirectly, it helps and stages events for representatives of tourist associations and local administrations. Their goal is to assist the better functioning of tourism in order to increase performance and employment.

When it comes to the development of tourism services, we have applied a set of marketing activities to support tourism; we also identify investment opportunities in tourism, promote them at home as well as abroad, and comment on and draft conceptual and strategic documents relating to tourism, etc.

In the sphere of development of tourism infrastructure there are several projects, for instance as part of a very recently completed project we have installed new road signs directing tourists to local tourist attractions such as cultural, historical and technical monuments and natural attractions.

BBSK cooperates with representatives of local administrations, the business sphere, tourist associations and professional associations in order to solve issues affecting the development of tourism infrastructure in the region. It also organises mass events as visitor attractions. A crucial task is to build and maintain tourist inormation offices.