THE SLOVAK post office has issued a postal stamp picturing a folk symbol of the Easter holiday – a decorated Easter egg. 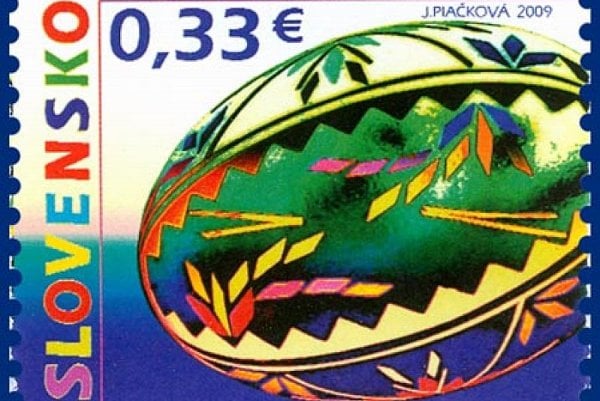 THE SLOVAK post office has issued a postal stamp picturing a folk symbol of the Easter holiday – a decorated Easter egg.

More than two million copies of the Easter egg stamp, which has a nominal value of €0.33, have been printed. The copies of the stamp were printed in Prague; its designer is the academic painter Júlia Piačková.

Along with the eggs stamp Slovak Post has also issued – for the first time – a special edition of books of self-sealing stamps which bear the fragrance of daffodils, with which it intends to support a campaign by the League against Cancer entitled the Day of Daffodils. The fragrance of Daffodils is applied into the printing ink and is released gradually by heat and contact with fingers. The pack includes 10 stamps, and is being issued in a limited edition of 10,000 pieces, Slovak Post spokesman Juraj Danielis said.

Eggs which are painted or decorated in other ways symbolise spring and new life and, in the Christian context, are connected with the resurrection of Jesus Christ. The symbolism of eggs dates back to pagan times, when it was related to fertility and the cycle of life. In many ancient cultures, eggs are customarily put into the graves of the deceased.

In the wider Slavonic environment, we still see the habit of decorating eggs in connection with spring celebrations. In various regions of Slovakia, different technologies are used to decorate eggs – e.g. the traditional waxing, batik, etching, scratching, inserting grass and straw, or wrapping in wire.

Apart from colourfully decorated eggs, the Easter holiday was also connected with the tradition of boiling and eating eggs. Eggs as symbols of life have, especially in the past, been intended to restore strength after the hard winter season.