Presidential campaigns finally get under way

BILLBOARDS featuring candidates with amiable smiles are the most visible signs that Slovakia is gearing up for a presidential election, the first round of which will take place on March 21. Election rules meant that candidates and their backers could officially launch their campaigns and get-out-the-vote activities just two weeks before the first round. 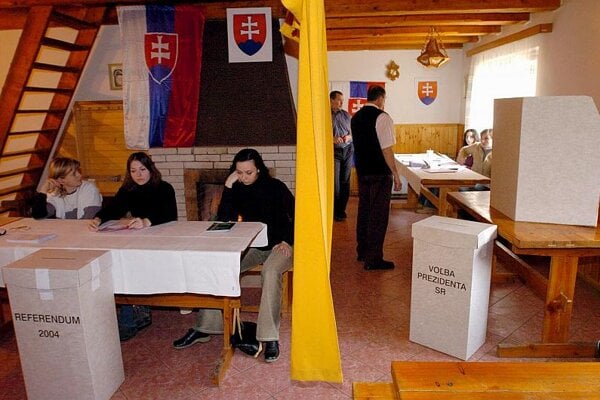 BILLBOARDS featuring candidates with amiable smiles are the most visible signs that Slovakia is gearing up for a presidential election, the first round of which will take place on March 21. Election rules meant that candidates and their backers could officially launch their campaigns and get-out-the-vote activities just two weeks before the first round.

The rules also state that the final popular opinion polls cannot appear later than March 18. Slovakia then observes a two-day electioneering moratorium from 07:00 on March 19, until 22:00 on March 21, when polling stations will close, during which campaigning is banned.

Even though the candidates’ campaigns have started in earnest, observers say they are more likely to get out the vote than influence the voters’ preferences. Those same observers remain tight-lipped when it comes to guessing which candidates might benefit from a low turnout and which might reap the rewards of a higher number of ballots cast.

Surveys suggest that somewhere between 34 and 41 percent of all eligible voters may actually turn up to vote on March 21.

Pavel Haulík of the private MVK polling agency estimates that first-time voters tend to be the most undecided, and that their turnout might be lower than the average turnout among other groups.
Sociologist Haulík told The Slovak Spectator that the campaign’s role is more to raise awareness about the significance of the elections than influence peoples’ choices.

“More precisely, the campaign is intended to prevent a very low turnout rather than boost participation,” he added.

There are seven candidates vying for a stay in Slovakia’s presidential palace, including the incumbent, Ivan Gašparovič, who is supported by two of the ruling coalition parties, Smer and the Slovak National Party (SNS), in his bid for re-election.

Based on the findings of recent polls, his strongest challenger is Iveta Radičová, who is backed by the main parliamentary opposition parties the Democratic and Christian Union (SDKÚ), the Christian-Democratic Movement (KDH), and the Hungarian Coalition Party (SMK).

Zuzana Martináková is running as the candidate of the non-parliamentary liberal party Free Forum (SF) and František Mikloško, who has run for the presidency before, is back in the race, this time as the nominee of the Party of Conservative Democrats (KDS).

The candidate of the third party in the ruling coalition, the Movement for a Democratic Slovakia (HZDS), is Milan Melník. The non-parliamentary Communist Party (KSS) is backing Milan Sidor; while his former KSS colleague Dagmara Bollová is running as an independent candidate.

The Slovak President has the authority to negotiate and ratify international agreements; receives, appoints and recalls heads of diplomatic missions; and signs laws passed by the Slovak Parliament. The president also has a right of veto and can return laws to parliament with comments attached, according to the official presidential website.

The president also appoints and recalls the prime minister and members of the cabinet and awards state honours. The office-holder, who serves as the commander-in-chief of the country’s armed forces, also has the right to grant amnesties or commute penalties imposed by the courts, the website says.

The president summons the opening session of the Slovak Parliament and also has the authority to dissolve parliament if the institution fails to pass the programme statement of the cabinet within six months of the day the cabinet was appointed, or if parliament has been dysfunctional and unable to adopt decisions for more than three months. However, the president cannot exercise this authority during the last six months of his or her elected term, or during wartime or a state of emergency, says the site.

Readying for the vote

The country’s Interior Ministry is in charge of securing the whole electoral process. The ministry estimates that Slovakia has about 4,250,000 eligible voters.

“There have been 4.5 million voting passes distributed,” Alena Koišová of the Interior Ministry’s communications department told The Slovak Spectator.

The ministry and the statistics authority together have a budget of €9,572,000 to cover the expenses of preparing for and holding the presidential election, Koišová said.

Slovakia’s statistics authority has also been making preparations to process the election results.
On March 17, there will be a third full-scale test of the procedure for processing the results of the election, in which all the employees of the Slovak Statistics Office will be able to check all the processes as they will operate during the actual election, Eva Kelemenová, spokeswoman of the Slovak Statistics Office, told The Slovak Spectator.

The election results will be continuously updated at the www.volby.sk website, which will become active shortly before the election starts. Until then, basic information is available at www.statistics.sk, where the main page features information about the presidential election in both Slovak and English.

The cost of processing the election result is expected to reach €1.3 million, with 1,000 employees of the statistics authority and cooperating organisations involved, employing about 500 computers, Kelemenová said.

Analysts have been cagey about predicting who might benefit from a low turnout.

“Considerably more people say in surveys that they intend to cast their ballot than actually do,” Haulík told The Slovak Spectator. “Later, they decide to stay at home on the day of the election. This is why it is difficult in this case to say who might benefit from the lower turnout.”

What polls have measured so far is who people would vote for assuming they make it to the polling stations, Haulík explained. This means that the real turnover will only become clear at the very end of the campaign, on election day - and surveys give little basis for guessing which candidate’s supporters are most likely to turn out, he added.

However, Haulík said that older voters might influence the election most, since they traditionally go to polling stations, pursuing a habit they acquired under the previous regime when elections typically had turnouts of almost 100 percent.

“They are the people who look at [voting in] elections more as a form of duty rather than a right,” Haulík said. “It is expected that their turnout will be much better than that of other groups. Since pensioners form about one quarter of the electorate, this is precisely the group which might significantly influence the result.”

The upcoming election could be quite similar to the one in 1999 since now, just as then, there are two leading candidates who are very likely to proceed to the second round. All the others are significantly behind in opinion polls, according to Haulík.

In 1999, the two main runners were former prime minister Vladimír Mečiar, of the HZDS, and Rudolf Schuster, the former mayor of Košice, who ultimately won the election.

At the election in 2004 there were several runners with realistic hopes, four of whom initially received broadly equal support. Polls later identified three stronger candidates: Vladimír Mečiar, Eduard Kukan of the SDKÚ, who at the time was the serving foreign affairs minister, and Ivan Gašparovič, according to Haulík.

In that election first-round turnout was decisive since supporters of Kukan, the candidate who had recorded the highest approval rating in opinion polls, in the end did not turn out in sufficient numbers for him to advance to the second round, said Haulík.

However, he discounts the possibility of a similar scenario this year, since there is no candidate likely to overtake either of the two leading candidates in the first round.

The distance between the first two candidates and the rest is so huge that even a deformed turnout is unlikely to give any of the other runners enough votes to push out Gašparovič or Radičová, he said.

“In this sense, the election, de facto, will be decided in the second round,” Haulík concluded.