MILK prices keep falling and farmers say they are no longer able to cope with the consequences. The crisis in the market for milk is one of the reasons why they organised a protest march in the streets of Prague on March 12, as the Czech capital hosted a meeting between Marianne Fischer-Boel, the European Commissioner for agriculture and rural development, and agriculture ministers from EU member states. Farmers see the EU’s Common Agricultural Policy as the source of their problems. 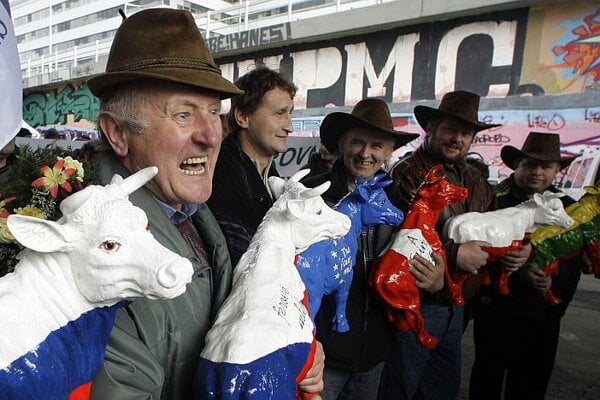 MILK prices keep falling and farmers say they are no longer able to cope with the consequences. The crisis in the market for milk is one of the reasons why they organised a protest march in the streets of Prague on March 12, as the Czech capital hosted a meeting between Marianne Fischer-Boel, the European Commissioner for agriculture and rural development, and agriculture ministers from EU member states. Farmers see the EU’s Common Agricultural Policy as the source of their problems.

In Slovakia, the price at which farmers sell milk to dairies currently ranges from €0.18 to 0.23 per kilogramme. Future prospects for an increase are poor, since some dairies have already announced decreases in the price they will pay in the forthcoming period. Prices have dropped by 40 percent compared to last year and are currently around 70 percent of the European average. At the same time, production costs are increasing, Margita Štefániková, the executive director of the Slovak Association of Milk Producers, told The Slovak Spectator.

The current milk price covers less than 60 percent of production costs and Slovak dairy farmers are therefore losing approximately 15 cents on each kilogramme of milk they produce, amounting to a total of more than €20 million in just the first two months of 2009, Štefániková added.

Agriculture Minister Stanislav Becík has already taken measures to address the situation: he has proposed to producers and distributors of milk and dairy products that prices be frozen in order to preserve the sector in the local market. However, his main appeal has been to Brussels, to take measures to improve what he called ‘the alarming situation in the dairy market’.

Farmers agree that measures need to be taken at a European level.

“Since Slovakia has only 0.6 percent of the overall milk production of the EU, we are not able to help ourselves with the current problems,” Stanislav Nemec, spokesman of the Slovak Chamber of Agriculture and Food (SPPK), told The Slovak Spectator. According to him, farmers saw the milk surplus problems coming a long time ago, but the European Commission (EC) did not act – on the contrary, a measure from 2003 which [has] increased production quotas [since 2008] for milk in member states only contributed to the current crisis.

“We will continue to criticise this measure until it is revised,” Nemec said, adding that this was one of the main points on the agenda for the protest in Prague.

“The current sharp fall [in prices] is not a result of the economic recession but rather of the changes in the system of quotas, which were gradually increased by 1 percent per year from 2008,” was the personal opinion of Marian Božík, who works for the Research Institute of Agriculture and Food Economics.

The EU has already taken steps to address the crisis.

“We have recently introduced export refunds for dairy products and private storage aid for butter, and we are now buying butter and milk powder into intervention,” Michael Mann, the spokesman for the Agriculture and Rural Development Commissioner told The Slovak Spectator.

“By temporarily bringing back export refunds we hope to stabilise the EU price level and tide over those [farmers] threatened with bankruptcy,” Fischer-Boel wrote on her blog. “This is a real safety net measure for an exceptional situation. We will monitor the market closely and will not hesitate to withdraw refunds again if they are no longer needed.”

“The standard measures that have been taken for this period might help countries where milk prices are higher now – the richer, western European countries which might be able to release part of their surplus onto the markets of third countries in this way, but it is not enough and it will not solve the situation significantly for the new EU member states including Slovakia,” Nemec told The Slovak Spectator.

SPPK also believes that production quotas for milk should be frozen temporarily, since the European market is proving unable to absorb more milk. One of the measures for the exceptional situation could be also temporary price regulation, by setting a minimum purchase price, Nemec said.

On the national level, SPPK is calling on the government to adjust VAT for milk and other basic food products.

“This is not a new phenomenon, it’s been mentioned in the past, when this government took office and designed its programme,” Nemec said.

The specific problem of the Slovak market is that it is very small and when milk producers protest about prices it is easy for large retail chains to exclude them, since they are flooded with offers from abroad.

“The way out in this time of crises could be the re-introduction of the target milk price which was cancelled in 2004,” Božík thinks. “Another non-traditional and problematic, but certainly effective way could be the definition of a minimum share of local products on the Slovak market.”

According to Mann, the EU will continue to make direct payments to farmers, thereby providing a basic safety net. In the event of a crisis, EC has a number of market management measures at its disposal, such as export refunds.

“The agricultural sector is generally more resilient to economic crises than other sectors as food demand needs to be satisfied,” Mann said. However, the financial crisis is thought to have amplified the fall in the prices of many commodities during the second half of 2008 and it is not just the prices of dairy products which are expected to remain depressed over the short-term, he added.