STEEL giants worldwide have been feeling the pain, cutting production and even merging in an attempt to stem the losses their industry has suffered as a result of rapidly falling demand for steel products as a consequence of the global economic crisis. 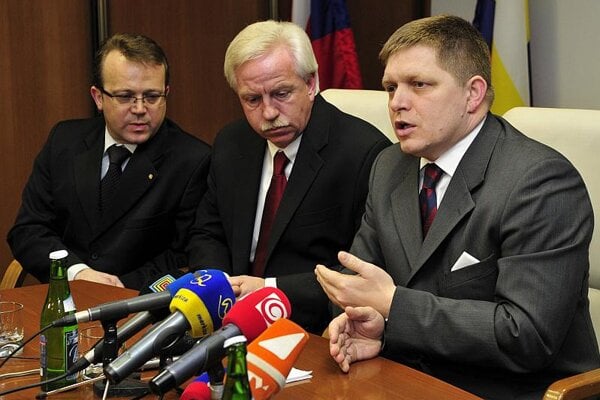 STEEL giants worldwide have been feeling the pain, cutting production and even merging in an attempt to stem the losses their industry has suffered as a result of rapidly falling demand for steel products as a consequence of the global economic crisis.

Slovakia’s steel giant US Steel Košice (USSK) is no exception and has been hit hard by falling demand from ailing carmakers for materials. The country’s largest private employer has cut production and working time, curbed purchases of services and products from suppliers and did not extend work contracts with hundreds of temporary agency workers.

The state, however, has suggested that US Steel might use one of the lifelines that were developed to accommodate the government’s declared intention to preserve employment in the current period of economic downturn.

Slovak Prime Minister Robert Fico said on March 7 that helping companies prevent layoffs is a priority for his government regardless of whether the ailing business is private or state-run.

“All of them face serious problems that we must jointly solve,” Fico said, as quoted by the SITA newswire. “I would not make a distinction at the moment. We will search for ways to help US Steel just as much as we helped other companies.”

USSK could access benefits through an already approved mechanism of support in which the state covers payroll tax expenses for 60 days for employees of firms which are operating in a crisis regime, said Fico.

USSK suggested that it is only seeking access to the same anti-crisis tools being offered to other businesses.

“US Steel is not asking for any exemptions and is in favour of a fair approach,” USSK spokesman Ján Bača told The Slovak Spectator.

According to SITA, the agreement under which US Steel purchased the Košice plant, as well as European Union regulations, might prevent USSK from accessing the mechanism. However, Prime Minister Robert Fico promised prompt negotiations with Brussels so that the mechanism can be applied to USSK, wrote SITA.

The representation of the European Commission (EC) in Slovakia told The Slovak Spectator that the EC has not been officially informed about any of the measures pertaining to USSK and thus cannot comment on the issue.

The government is also pondering an increase in the current ceiling of funds that companies can access through the mechanism from €200,000 to €500,000 or, in the case of larger firms, even more. Currently, firms that shorten their working week but preserve employment can have the payroll taxes of their employees paid for up to 60 days.

The employees of USSK, one of the biggest producers of flat-rolled steel products in Europe, have had their working week cut to four days and are receiving reduced salaries.

The company faced its first blow of 2009 in early January when Russia cut its gas supplies via Ukraine to European Union countries, citing a commercial dispute as the reason. Restrictions put in place on January 6 required large commercial customers and businesses to reduce their gas usage to a minimum safe level and brought steel production at USSK to a halt, lasting until January 19.

Another way the state could assist large companies in Slovakia is by allowing more flexible deadlines for payments to environmental funds. Fico suggested that such transfers could be delayed and USSK could use the funds to address some effects of the crisis, SITA wrote.

On March 11, the ruling coalition indirectly amended the Environmental Fund Law by revising the law on securities and investment services. According to the amendment, an operator of a waste dump must create a reserve to cover at least fifty percent of the total costs of shutdown, rehabilitation and monitoring of the dump once it closes. Previously, the reserve fund contribution was set at 100 percent of these costs, wrote SITA.

The governing coalition came up with the proposal after Fico held talks with the management of USSK at which he pledged to consider a temporary cut in payments to the company’s reserve fund to pay for future liquidation of its waste dump. The company will thus keep the money to spend on other purposes.

Bača commented that “US Steel has been meeting all the environmental norms defined by the law and would continue meeting them even beyond the terms required by the law.”

USSK said earlier this year that it views anything that will help maintain employment, stimulate creation of new jobs, launch new businesses and develop and facilitate entrepreneurial activities as worthwhile.

Richard Ďurana, director of the Institute of Economic and Social Studies (INESS), an economic think-tank, suggested that support for individual companies is not the best way to fight the crisis.
“Instead of paying payroll taxes, the state should offer a flat reduction in payroll taxes, which would help not only US Steel but all the companies in Slovakia,” Ďurana told The Slovak Spectator.

According to Ďurana, a combination of cutting payroll taxes, eliminating the minimum wage and making labour legislation more flexible could reduce labour costs and release money to businesses to preserve their existing jobs or even create new ones.

The released funds could also be used to invest in technology, particularly given the current restricted access to bank loans, said Ďurana.

“The most flexible labour market possible will be a key condition for the prompt adaptation of the Slovak economy to changing conditions around the world,” Ďurana said. “Of course, cuts to payroll taxes must be accompanied by savings on the side of public finances.”