WHAT is the right response of tax administrations around the central and eastern European (CEE) region to the economic downturn, which is putting immense pressure on both the public and private sectors? This was one of the questions that resonated during the 4th regional tax conference organised by the American chambers of commerce of the Visegrad region, held in Bratislava on March 10. 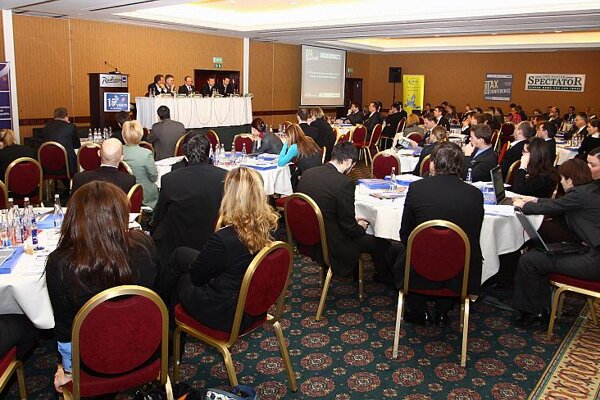 WHAT is the right response of tax administrations around the central and eastern European (CEE) region to the economic downturn, which is putting immense pressure on both the public and private sectors? This was one of the questions that resonated during the 4th regional tax conference organised by the American chambers of commerce of the Visegrad region, held in Bratislava on March 10.

“In order to weather the storm of the crisis, CEE countries need to maintain their attractiveness for business and FDI [foreign direct investment],” Jake Slegers, the executive director of AmCham Slovakia, said as he described the main outcomes of the conference. “Investors appreciate macroeconomic stability and predictability. Lowering of tax rates, broadening of tax bases and providing a good taxpayer service should be the way forward.”

It has been proven that simple and effective tax systems are not only attractive for business but are also rather efficient in generating government revenue, tax experts from all over the Visegrad region agreed, according to Slegers. Furthermore, providing incentives for investment in education, and research and development will in the long run produce a highly-skilled labour force and thus attract industries with higher added value, he said.

While the economic crisis may take different forms and have different impacts in various countries, the tax administrations of the Czech Republic, Hungary, Poland and Slovakia have also been tackling some shared challenges, agreed the participants of the tax conference, which was also backed by the Slovak Ministry of Finance.

“The whole world is trying to find measures that will mitigate the crisis,” said Slovak Finance Ministry State Secretary Peter Kažimír. “Our country belongs to that part of the world which did not create the crisis but is struggling with its spillovers into the real economy. Still, Slovakia managed to restructure its banking sector and adopted the euro just before the negative impacts of the crisis started to take their toll on the currencies of EU members, especially those outside the eurozone.”

According to Kažimír, the steps that the Slovak government has taken so far clearly show that the country is aware of the importance of the tax issue.

In fact the conference, which according to Slegers is a unique cooperation between the regional American chambers of commerce, is taking place just as the Slovak government is in the process of delivering a series of crisis packages, including several tax changes, intended to help maintain employment and give a boost to the economy.

However, tax professionals feel there are some other ways to support foreign investments which Slovakia could further adopt to preserve the country’s competitiveness.

Stan Jakubek, Country Managing Partner of Ernst & Young and Chairman of the Tax Committee of AmCham Slovakia, introduced to participants a tax initiative which included several suggestions with the potential to significantly affect the business environment in Slovakia.

“The initiative aspires to improve transparency and create an environment of stability for foreign investors as well as improving the attractiveness and competitiveness of Slovakia,” Jakubek said.

The package includes a proposal to introduce participation exemption of profits from the sale of shares, along with a proposal for the introduction of a strong functional ruling system. Its third point is the concept of VAT grouping, which has been implemented with effect from January 1, 2010, and under which several companies within a group can be treated as one taxpayer, said Jakubek.

The fourth item is a call for a transparent and equitable method of calculating and imposing penalties; the fifth point is taxation of the temporary or provisional use of tangible property; and the last item in the package is component depreciation, which has also been the subject of another recent amendment, according to Jakubek.

“We believe that these changes would support foreign investment and at the same time preserve Slovakia’s competitiveness,” Jakubek told the conference. “I hope we can contribute to the ongoing discussion over Slovak amendments to the tax law.”

The conference focused on recent and possible tax changes in the region. It also considered how to move towards a better VAT model, and the regional impact of the EU VAT package. Participants looked at the euro adoption process in Slovakia and were provided a regional fiscal overview. One of the panels also looked at possible responses to the financial crisis.

Next year’s tax conference will take place in Warsaw, which was the venue for the first joint tax conference of Visegrad Four (V4) countries four years ago. Since then, every year a different V4 capital has hosted the conference, which aspires to bring together tax experts from both government and business to review best practices, highlight problems and outline possible solutions in order to maintain a favourable business climate in the region, said Slegers.

“Both the representatives of government and business appreciated the opportunity to share their views on the tax systems and their functioning in the respective countries,” Slegers said.

“Exchange of views and experiences between corporate taxpayers and representatives of tax administrations can significantly help to make the system work better – which is ultimately in the interests of both sides.”