Plan a visit to exotic Asia via the National Museum

THE SLOVAK National Museum (SNM) in Bratislava is giving Slovak audiences an opportunity to travel to several exotic countries of the Far East - India, Nepal, Tibet and Bhutan - through its exhibition called Shangri-la, which runs until July 12. 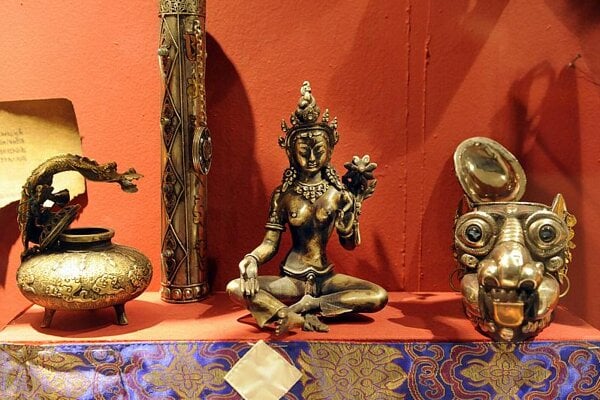 The atmosphere of distant Asia can be seen, heard and felt through the exhibits at Shangri-la. (Source: TASR)
Font size:A-|A+  Comments disabled

THE SLOVAK National Museum (SNM) in Bratislava is giving Slovak audiences an opportunity to travel to several exotic countries of the Far East - India, Nepal, Tibet and Bhutan - through its exhibition called Shangri-la, which runs until July 12.

“It is a rare travelling experience for all of one’s senses,” the deputy general manager of the SNM, Branislav Rezník, said. He also promised plenty of other accompanying events for both children and adults including a visit from nine monks who will offer a ritual creation of the mandala and other sacred ceremonies. Visitors can look forward to various discussions, movies and meetings with travellers or to tasting traditional meals, the TASR newswire wrote.

The exhibition was initiated by the Czech traveller, adventurer, photographer and mountaineer Rudolf Švaříček. All original exhibits are items that he brought home from frequent expeditions to the region.

In addition to a green jungle, there is a mosque, a Hindu and a Buddhist temple, a monastery, a sanctuary and other buildings, as well as a busy Indian street with the tools of a baker, dentist, shoemaker, ear-cleaner and astrologist. One can view a cremation waiting room where older and sick people willingly go to end their lives and a mihrab, a small niche in every Islamic mosque, pointing towards Mecca from anywhere in the world.

Visitors can watch a movie documentary about the Czech-Slovak expedition Everest 2007 and another part of the exhibition is dedicated to the most famous Czech travelling couple Miroslav Zikmund and Jiří Hanzelka. Zikmund, who recently turned 90, is expected to attend the exhibition and organisers have also promised a visit from the Dalai Lama.

The exposition takes visitors to the region with the highest mountain range in the world – the Himalayas; from all types of vegetation within tropical valleys to the frostiest peak on Earth; to communities of fascinating people with various religions, cultures, mysticisms and rituals. On the simulated top of Mt. Everest one will be able to feel the power of a windstorm and underneath – in an icy cave – the cold. There will even be a mountain river with fish.

There are historical documents and photographs from a two-year cycle called Reminiscences of Tibet from 1954-55, the work of Josef Vaniš and Vladimír Sís, who completed an expedition of nine months and 1,760 kilometres through Tibet to the town of Lhasa, the “residence of gods”.

In contrast to these black-and-white photographs, there are two more recent exhibits by travelling Slovak photographers. Martin Nikodým wandered through India and Nepal in 2007 and Pavol Breier has been travelling to this region for more than 20 years.