Incumbent Ivan Gašparovič, backed by two parties of the ruling coalition – Smer, the largest party in parliament and the junior coalition Slovak National Party (SNS) and Iveta Radičová – the joint candidate of the parliamentary opposition parties will be clashing head to head in the second round of presidential elections in Slovakia scheduled for April 4. 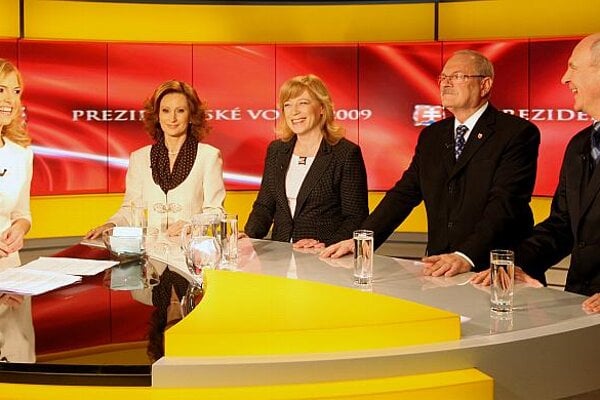 Incumbent Ivan Gašparovič, backed by two parties of the ruling coalition – Smer, the largest party in parliament and the junior coalition Slovak National Party (SNS) and Iveta Radičová – the joint candidate of the parliamentary opposition parties will be clashing head to head in the second round of presidential elections in Slovakia scheduled for April 4.

After counting all the votes from 5,919 election precincts, Gašparovič finished first with 46.70 percent of the votes and Radičová was second with 38.05 percent. Gašparovič thus collected 876,061 votes while 713,735 eligible voters wanted to see Radičová moving to the presidential palace, according to the official results announced by the Central Election Commission at 10:00 on March 22.

According to the official results, František Mikloško collected 5.41 percent of the votes and Zuzana Martináková received 5.12 percent. Milan Melník followed with 2.45 percent, with Dagmara Bollová lagging behind with 1.13 percent and Milan Sidor placing last with 1.11 percent.

Gašparovič won the race in five out of Slovakia’s eight regions: Banská Bystrica, Košice, Prešov, Trenčín and Žilina. Radičová had the most votes in the Bratislava, Trnava and Nitra regions.

The election turnout was highest in the Bratislava region, standing at 47.87 percent. Košice recorded the lowest turnout where only 38.86 percent of the eligible voters used their right and cast a ballot.

The options for Slovaks in this election were narrowed down to seven candidates. Bollová was running as an independent candidate and Gašparovič was supported by two of the parties which make up the ruling coalition – Smer, the largest party in parliament, and the Slovak National Party (SNS).

Martináková was the candidate of the non-parliamentary liberal Free Forum (SF) party and Melník was supported by the third governing coalition party, the Movement for a Democratic Slovakia (HZDS).

The candidates were allowed actively to canvass voters for their support during a two week period prior to a pre-election moratorium which began at 07:00 on Thursday, March 19 and which lasted until 22:00 on Saturday, March 21, when the polling stations closed. The official results were announced on March 22 at 10:00 by the Central Election Commission.

The results of the first round of the presidential election have confirmed the expectation that a ruling coalition - opposition fight would be clearly reflected, said political analyst Peter Horváth to the TASR newswire.

Horváth said he assumes that Gašparovič did not manage to collect all the votes of the Smer and SNS electorate. On the other hand, Radičová managed to collect more votes than the total electorate of the three opposition parties supporting her, according to Horváth. He added that Radičová’s tactics to not involve other politicians in her campaigning has proven successful.

Political analyst Rastislav Tóth said that voters who supported the unsuccessful candidacies of Martináková and Mikloško will face difficult dilemmas in the second round of the elections.

“They may not go to the polls at all,” Tóth told TASR. Neither Horváth nor Tóth expect the unsuccessful candidates to publicly support one of the winners from the first round.

Political analyst László Öllös predicts that the second round of the elections will have a higher turnout.

“Now, things are becoming tough” Öllös told the SITA newswire. “There is a chance for the opposition candidate to win.”

However, the candidates will have to be more active and creative in their campaigns, he added.

Political analyst Miroslav Kusý agrees with his colleague that the fight will become even harder than it was in the first round. Even Radičová will have to be tougher and react to attacks, Kusý told SITA.

Gašparovič said he can hardly imagine the media campaign against him growing even harsher before the second round. Gašparovič said some of the private television broadcasters showed their preference for Iveta Radičová, TASR reported.

“I’m glad I managed to win this fight with the media and I’m sure I will continue winning,” he told TASR.

Gašparovič said he is not a member of any of the parties that supported him and he claimed he will carry on proving to the citizens that he stands at their side.

“I think especially today Slovakia needs a president who understands citizens and who does everything to present Slovakia as a trustworthy, open state which can be relied upon also by its neighbours,” he said.

According to Gašparovič, citizens need a president who will unite people and seek compromises rather than create tension in society. In comparison to the Czech Republic or Hungary, Slovakia has a stable government Gašparovič said, adding that he believes this political stability is also to his merit, TASR reported.

“It is my task to be the one who will search for all the means to avoid conflicts and fight for political space between the rivals,” Gašparovič was quoted as saying.

Gašparovič is glad he is backed by the two strongest coalition parties who are supporting him also for his programme, which is very similar to theirs. He said his programme is based on his life-long philosophy to be socially oriented, TASR reported.

Gašparovič believes his first round advantage can help him in the second round too.
“I won with an advantage of one big city and I think it’s a good advantage,” he told TASR. “I will appreciate if others, who understand that in the position of a president I want to continue my programme, will join also.”

The opposition candidate for President of the Slovak Republic is feeling confident before the second round of the election.

“I feel very strong,” Radičová said after the results of the first round of the elections were released, SITA reported.

According to Radičová people started to believe “that politics can be polite, decent, gentleman-like, straight-to-the-point and that it can really solve the everyday problems of people”, SITA wrote.

Radičová said the small difference between the number of votes for her and for the incumbent President Ivan Gašparovič was a pleasant surprise for her. The results present a great challenge for her in the second round and she is looking forward to a real duel between the two candidates, she said.

“I will try to show very clearly in the dialogues with Mr. Gašparovič who Ivan Gašparovič is and who Iveta Radičová is,” she was quoted by TASR as saying.

Radičová said she was not afraid of possible attacks from Prime Minister Robert Fico who supports the incumbent president in the elections.

“The Prime Minister of the Slovak Republic is the prime minister of all citizens of this republic, so also mine,” she said. “If he criticizes me, I will think about the reasons why he’s doing so. If he does not accept sensible proposals, then I have to pronounce a serious charge that he holds full responsibility, really full responsibility, for the path this country is walking.”

She was mainly disappointed by the low turnout of voters in the first round and in the coming days she will try to persuade the biggest possible number of non-voters that the post of the president is important.

Radičová said she can only hope for the support and endorsement of the unsuccessful candidates. She is not sure to what extent they could influence the voters since the first round already showed that the voters do not act as a disciplined ‘military unit’ but decide freely on their own, SITA reported.

Radičová is not sure she can expect the support of Mikloško.

“Ferko is a great man and I believe he will think and meditate,” Radičová said to SITA. “And that he will make the right decision.”

Mikuláš Dzurinda, the leader of the SDKÚ believes that the success of Radičová, the joint opposition candidate, to progress to the second round of the presidential elections could help Slovakia. Radičová could serve as a mediator between the governing coalition and the opposition and inspire a debate about the best solutions during this time of crisis, SITA reported Dzurinda as saying.

The presidential campaign did not deviate much from the norm and brought few surprises: the candidates are unlikely to have massively extended their base of support through their campaigns, say observers.

“It has not been better or worse than campaigns during previous elections,” Pavel Haulík of the private MVK polling agency told The Slovak Spectator. “It contained only a minimum of elements which could have potentially widened the voter appeal of the candidates.”

According to Haulík, none of the candidates has used activities which might have significantly extended their base electorate. In fact they only preserved what they had, he added.

“The result of the campaign has only confirmed the starting situation,” Haulík said. “It only warned the voters that they should go and cast their votes.”

It is hard to compare presidential powers between countries since each country has some unique aspects and some comparable aspects, said Eduard Bárány of the Slovak Academy of Sciences’ Institute of Law and State.

“However, in France, Russia or Ukraine the president traditionally has stronger powers,” Bárány told The Slovak Spectator. “Presidential powers in Germany or Austria are incomparably weaker than in Slovakia. This subject is always linked to the particular political traditions in each country.”

There is a tradition in Slovakia, according to which the impression has been created that the personality of an office-holder shapes the office that he or she holds, said Bárány, referring to the presidents of the first Czechoslovak republic.

“However, there is a latent contradiction between direct presidential elections, which give the president an extraordinarily strong legitimacy, and the authorities vested in the president, which are instead designed for a president elected by parliament,” Bárány told The Slovak Spectator.

In the same way, the Constitutional Court, when it was asked to rule on presidential powers pertaining to the appointment of ministers, in the spirit of this original concept leant towards a narrower interpretation of presidential powers. The case was brought to determine whether the president is required to appoint or recall a minister if the prime minister demands that he do so.

“The Constitutional Court said that the president must do so and this fully matches the architecture of our constitution,” said Bárány. “But society perhaps expects more from the president, in the spirit of our cultural-political tradition, than what directly flows from that office’s strictly understood powers.”

As for the president’s most politically sensitive powers, Bárány pointed to the delivery of reports on the state of society to parliament.

“But in fact the president’s strongest individual decision-making power is in the appointment of Constitutional Court judges, when he picks judges from among the candidates proposed by parliament,” said Bárány. “This is not a situation which happens when appointing ministers, where the president proceeds based on the proposals of the prime minister.”

According to Bárány, another politically sensitive power is the selection of the prime minister, but this is an occasional power which is normally exercised only once every few years, after parliamentary elections.