AFTER keeping the headline writers of Slovak newspapers busy for the past few months, the fame of Slovakia’s controversial ‘bulletin-board’ tender, with its cool €120 million price tag, has now made it to Brussels. However, the fame risks turning into infamy for Slovakia unless the government can provide the European Commission with a convincing explanation for the apparently non-transparent way in which the tender – which was for the provision of services linked to drawing of European Union funds - was awarded by the Ministry of Construction and Regional Development.The European commissioner for regional policy, Danuta Hübner, arrived in person on March 13 to give Slovak state officials a simple message: the commission expects the results of two long-awaited inquiries, by the country’s procurement authority and its Supreme Audit Office, to be delivered – and soon. 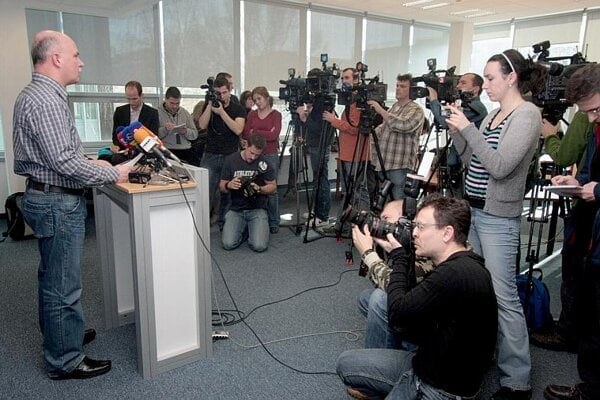 AFTER keeping the headline writers of Slovak newspapers busy for the past few months, the fame of Slovakia’s controversial ‘bulletin-board’ tender, with its cool €120 million price tag, has now made it to Brussels. However, the fame risks turning into infamy for Slovakia unless the government can provide the European Commission with a convincing explanation for the apparently non-transparent way in which the tender – which was for the provision of services linked to drawing of European Union funds - was awarded by the Ministry of Construction and Regional Development.
The European commissioner for regional policy, Danuta Hübner, arrived in person on March 13 to give Slovak state officials a simple message: the commission expects the results of two long-awaited inquiries, by the country’s procurement authority and its Supreme Audit Office, to be delivered – and soon.

The Construction Ministry, led by Marian Janušek, a nominee of one of the junior coalition parties, the Slovak National Party (SNS), awarded the tender to a consortium of companies led by Zamedia and Avocat, both of whom have close links to the SNS, after posting the original tender notice solely on the ministry’s internal bulletin board, to which members of the public do not normally have access.

“The commission has formally requested that the authorities submit full details of the situation and the results of investigations being carried out by their national control bodies, the Public Procurement Office and Supreme Audit Office, after these are finalised,” Dennis Abbott, spokesman for EC Commissioner Danuta Hübner, told The Slovak Spectator.

Once the results of audits and relevant documents linked to the case are received and analysed, the commission will decide what further steps to take, Abbott said.

“This may include infringement procedure in relation to implementation of public procurement legislation or a financial correction procedure if appropriate,” he added.

The country’s opposition parties have been calling on Prime Minister Robert Fico to sack Janušek for what they call a grave suspicion of cronyism. The opposition says that suspicions of overpricing of a separate tender, to supply a ministry logo at a cost of almost €83,000, are another reason why Fico should let Janušek go. Last December the main opposition parties, the Slovak Democratic and Christian Union (SDKÚ), the Hungarian Coalition Party (SMK) and the Christian-Democratic Movement (KDH), failed to force Janušek’s ouster in parliament.

Fico said that if the official inquiries prove that Janušek’s ‘fingers slipped’ in handling the tenders, he will not hesitate for a moment to end his ministerial career.

Local media and the opposition, in particular KDH boss Pavol Hrušovský, speculated that Fico does not want to disturb the course of the ongoing presidential campaign - the first round of which is to be held on March 21 - by sacking Janušek. The SNS is backing the candidacy of the incumbent president, Ivan Gašparovič, in cooperation with Fico’s Smer party.

The Public Procurement Office (ÚVO) started conducting its inspection at the Ministry of Construction and Regional Development on November 28.

Commissioner Hübner, during her visit to Bratislava, said that her office expected the results to be published “in the shortest period of time”.

And as The Slovak Spectator went to print on March 19, Fialová announced that the ÚVO had delivered its assessment on the tender to the Supreme Audit Office on March 18. However she said the ÚVO would not publish its findings as they remained subject to what she called a ‘duty of confidentiality’.

Abbott, Hübner’s spokesman, explained that given that structural funds are administered under shared management, it is the first responsibility of the beneficiary member state to assure itself of the legality and regularity of any expenditure involved.

“However the Commission is responsible to the Budgetary Authority for the way in which the Community budget is used,” Abbott said. “It must verify that the Member States are carrying out the tasks entrusted to them correctly.”

According to Abbott, cases of irregularities and fraud may be detected through audits performed by the commission, the member state, or the authority responsible for managing a particular programme. However, fraud may also be investigated as a result of a complaint or press article addressed to the commission or to the European Anti-Fraud Office (OLAF), he added.

The local media has reported that auditors found several breaches of public procurement law in the tender for provision of services in drawing on EU funds, including an overpriced order to produce logos for operational programmes.

In early February, Fico’s other ruling coalition ally, Vladimír Mečiar, who leads the Movement for a Democratic Slovakia (HZDS), joined the chorus of criticism and said that he is concerned that the European Union will want the money returned, the SITA newswire wrote.

The SNS said in mid-February that it would file a criminal complaint against political ethics watchdog the Fair Play Alliance, whose spokesperson Zuzana Wienk had called the tender non-transparent and said that there had been serious errors in the tender accounting documents that the ministry had provided to the alliance, the TASR newswire reported.

Ivan Kuhn, an analyst with the Conservative Institute think tank, said the interest of the European Commission in the tender is a natural outcome of these developments.

“The European Commission bears responsibility for the use of public funds and thus when in any country a suspicion emerges that the rules governing use of European Union funds have been violated, the commission uses the tools it has to control this and draw consequences,” Kuhn told The Slovak Spectator.

If the suspicion is proven, Slovakia will have to return part of the money – or, more specifically, those finances which were provided in a way which contradicted the rules, Kuhn said.

According to Kuhn, the European Commission will expect an explanation even if the ministry maintains that everything regarding the tender was done correctly, and that once the inquiry in Slovakia is concluded it will continue at the European level. He said that the Slovak inspection bodies might conclude that the procedure was in line with Slovak law, since the ministry could have used a loophole in the existing legislation.

However, Kuhn stressed that as an EU member state Slovakia is obliged to make its procurement rules conform to European procurement law.

The Conservative Institute (KI) has been monitoring the use of EU funds by Slovak ministries and institutions more widely. It found that ministries are not publishing enough information on how they handle EU funds, according to Kuhn.

“It does not necessarily mean that they are violating the law, but we still think that the public should have wider access to information on how public funds are being used,” Kuhn told The Slovak Spectator.

In order to check how the ministries are complying with the Freedom of Information Act, the KI simply started requesting information pertaining to the use of funds.

Dušan Sloboda of the Conservative Institute said that his think tank had requested that Janušek’s ministry provide information about contracting and drawing of EU funds for the 2004-2006 period, from when they were first drawn until today – effectively, from May 2004 until January 2009 – and that they made the same request for the 2007-2013 programming period, i.e. from January 2007 until January 2009.

“The ministry refused to release full-scale information on how these funds were drawn; they have not even given us partial information,” Sloboda told The Slovak Spectator.

According to Sloboda, the ministry argued that the information the institute has requested exists only in a complex structured database.

“Data for the whole programming period 2004-2006 just as for the programming period 2007-2013, are recorded in an ITMS database,” reads Janušek’s response, as quoted by the Conservative Institute. “The information requested by the claimant could be obtained by extracting the data from the ITMS database, which requires the creation of non-standard selection conditions and their further processing into output compositions. The requested information is processed in a complex manner and exists only in the described complex structure and form.”

The ministry also argued that the law does not oblige the target of a request to create data in the form requested by the applicant, if at the time of the application the data did not exist in that form.

However, the Conservative Institute said that the statement on the non-existence of the information is misleading, since the ministry actually publishes such information on a monthly basis on its website www.nsrr.sk - and then withdraws it.