THE ANIVERSARY of the emergence of the first Slovak state, a totalitarian satellite of Nazi Germany, remains a day of celebration for some Slovaks. Each year, as the date nears of the establishment of the state, under which about 70,000 Slovak Jews were deported to German concentration camps, sympathisers of the first Slovak Republic gather to demonstrate their connection to this period in Slovakia’s history. 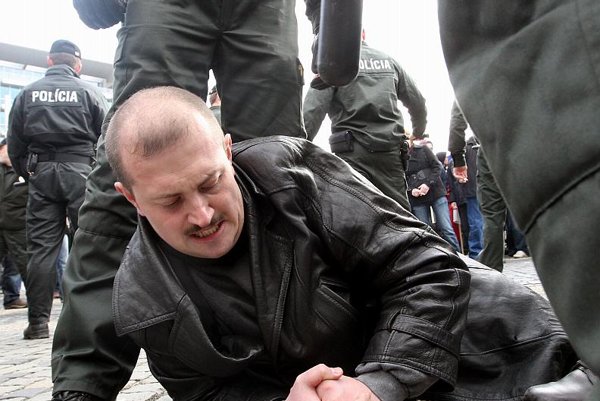 THE ANIVERSARY of the emergence of the first Slovak state, a totalitarian satellite of Nazi Germany, remains a day of celebration for some Slovaks. Each year, as the date nears of the establishment of the state, under which about 70,000 Slovak Jews were deported to German concentration camps, sympathisers of the first Slovak Republic gather to demonstrate their connection to this period in Slovakia’s history.

On March 14, 2009, around 300 people gathered in front of the presidential palace in Bratislava to commemorate the setting up of the 1939 Slovak state. Those who attended, who were mostly young, shaven-headed, male, and dressed in black, listened to nationalist speeches and shouted nationalist slogans. Dozens of riot police were deployed to secure order at the gathering, the SITA newswire reported.

Leaders of the ultra-right-wing association Slovenská Pospolitosť (SP), outlawed as a political party in 2006 and as a civic association in November 2008, praised the wartime Slovak state in their addresses to the crowd. Former party leader Marián Kotleba also later attacked the current political leaders of modern-day Slovakia, saying that they were applying double standards in punishing people, and comparing the treatment of a young nationalist who was arrested because he had shouted ‘On guard!’ - the salutation of the Hlinka Guard, a wartime right-wing militia which helped carry out the deportations of Jews - and a murder suspect who was released on bail.

“Let’s test democracy,” Kotleba told the crowd and greeted them with a Nazi salute. The police immediately detained him, causing a wave of discontent on the square, SITA reported.

The gathering was then dispersed and police escorted nationalists from the square after they refused to leave. Later, many of them gathered at Bratislava’s Martin Cemetery where they paid their respects at what is believed to be the grave of Jozef Tiso, the president of the wartime state.

Dozens of young people counter-protested against the far-right gathering on the same day in an event organised by the civic initiative ‘Bratislava Residents Say “No” to Neo-Nazis’. After gathering in SNP Square, several activists commemorated the Holocaust in Poštová Street where they installed forty stones by artist Ľubo Stacho which carried Jewish inscriptions and portraits of Holocaust victims.

Activists from four NGOs had prepared the exhibit as part of the ‘Enough of Silence’ programme, which features concerts, debates and exhibits opposing the promotion of fascism and totalitarianism.

“When the neo-Nazis march along the streets, it is no longer history, we are in the hot future,” said Eduard Chmelár, a university teacher who supported the anti-Nazi initiative, as quoted by SITA.

The aim of the second protest was to tell the public that open support for neo-Nazi ideology is not welcome.

Robert Mihály, a representative of the initiative, urged the Slovak government and in particular the Interior Minister to change Slovak legislation, because he believes that neo-Nazis marches are allowed because of gaps in the law.

The important thing is that people are not passive towards extremism, Mihály added.

The indifference of people that permitted the totalitarian regime of the first Slovak Republic to send thousands of its citizens to concentration camps is present in society today, said Peter Salner, the chairman of the Jewish Religious Community in Bratislava.

“Society has always been divided into those fighting for something, their active opponents and a silent majority which only care about their own problems and treat the ‘fight’ indifferently,” Salner told The Slovak Spectator. “I see this as a normal, although not a positive, phenomenon.”

Extremism is still a threat

For Salner, the presence of neo-Nazi groups in Slovak society and the expression of their beliefs in public is something that causes him mixed feelings.

“I respect freedom of expression and assembly, but the celebration of a state and a regime which actively supported the Holocaust seems perverse to me,” he said, adding that for people who had first-hand Holocaust experiences these public manifestations, and uniforms which resemble those of the Hlinka Guard, evoke painful memories and even depression.

Better education and knowledge about the Holocaust might help to persuade some people, but Salner suggests that these are not a universal palliative.

“Anti-Semitism has been functioning for several thousands of years and is stronger than many realise,” Salner said.

According to police statistics, reported instances of hate crime have been rising in Slovakia. In 2007 the Slovak police recorded 155 crimes with a racial motive and in 2008 the number rose to 213. The police charged 125 people, 50 of them youths, according to Andrea Polačiková, the spokeswoman of the Police Presidium.

The racially-motivated crimes sometimes involved cases of physical violence but in 178 instances they were hate crimes such as supporting and promoting organisations which aim to suppress the basic human rights and freedoms of specific groups.

“Compared to 2007 we recorded an increase of 58 cases in the number of crimes with a racial motive, which is 38.6 percent higher,” Polačiková told The Slovak Spectator. “Recently we have also recorded a higher number of crimes of this kind as a result of reports by citizens, which we highly appreciate. We are paying increased attention to this problem.”

Extremism is dangerous for society for several reasons, according to Michal Vašečka, a sociologist and the director of the Centre for the Research of Ethnicity of Culture.

“I would say that in many aspects they are legitimising the banal nationalism and ethnic policies of various mainstream political parties in Slovakia,” he said. “Thanks to them, even the political mainstream in Slovakia displays signs of a parochial culture, tribal thinking about the Slovak majority, and non-inclusive policies.”

As a result, those who represent the mainstream as it is understood in many countries of western Europe are being pushed into the margins and accused of being anti-Slovak.

“Neo-Nazi groups therefore play an important negative role - they are, though small in numbers, blocking attempts to create a modern Slovak political nation that will be shaped more by certain values and less by pre-modern tribal collectivism,” Vašečka explained.