THE WELL-KNOWN Danubiana Meulensteen Art Museum, located a few kilometres from the Slovak-Hungarian border, is these days a little closer to Hungary. Not because of some inexplicable movement of the Eurasian tectonic plate, but thanks to a unique cross-border exhibition within its premises since the middle of March. 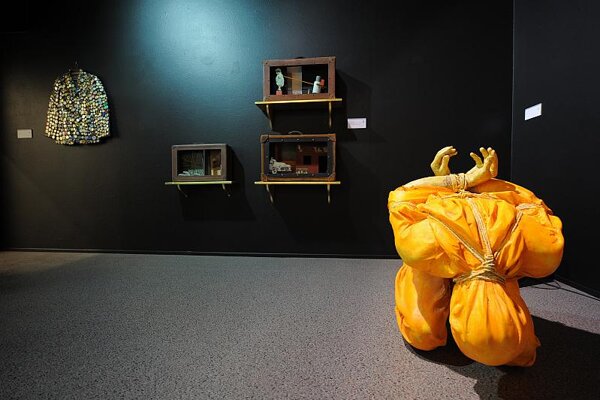 THE WELL-KNOWN Danubiana Meulensteen Art Museum, located a few kilometres from the Slovak-Hungarian border, is these days a little closer to Hungary. Not because of some inexplicable movement of the Eurasian tectonic plate, but thanks to a unique cross-border exhibition within its premises since the middle of March.

The abundant collection of works by as many as 100 Slovak and 100 Hungarian contemporary artists enables visitors to see for themselves, within ninety minutes or so, whether the two nations separated by the Danube are close or distant, and to what extent.

“The title of the exhibition, Tolerance in Art, clearly indicates our openness to the presentation of the widest selection of artists representing the contemporary art scene,” Eva Trojanová from the Danubiana wrote in her short commentary on the display, adding that no specific criteria had been established for choosing the respective pieces.

“The only limitation was the space of the museum,” she stated. As Tolerance in Art does not aim to map the development of a certain period or style, the variety of exhibited works of art is spacious, including paintings, sculptures, graphics, collages and photographs. Júlia Mészáros, director of the Győr City Museum, was the curator for the Hungarian works of art, while the choice of Slovak artists was made by several members of the Slovak Union of Visual Arts.

This method was chosen because the Danubiana itself did not want to “leave the impression of setting the trends in today’s artistic production”, as Vincent Polakovič, director of the museum, told The Slovak Spectator.

“An interesting fact is that none of the invited artists refused to take part in the display; on the contrary, they all acknowledged that such projects are needed,” he further remarked. “As a result, they themselves showed us the way that should become universal, the way of mutual respect and understanding.”

Mutual respect and understanding was, indeed, not only the main objective, but also the precondition of Tolerance in Art. As director Polakovič said:

“Organising any joint exhibition is impossible unless people are able to communicate and inspire one another even if their opinions and forms of expression are sometimes different.” In his view, supporting tolerance on the artistic scene may help to promote tolerance also in everyday life.

“I am convinced that the force of the voices of such a huge number of artists can positively motivate people on both sides of the Danube to become more open to each other,” he said. “That is why we decided to invite mostly renowned and well-known artists to join the project, so that they can attract the audience by their works as well as by their lives.”

This was also the case of Milan Lukáč, an outstanding Slovak sculptor and painter, an École Nationale Supérieure des Beaux Arts de Paris graduate and author of the famous Holocaust Memorial in Bratislava’s city centre. For the exhibition, he chose his sculpture titled Big Germination.
From the professional point of view, Lukáč praised the organisers for the idea of putting together so many pieces of art, and so many people.

“It is a great occasion for the local audience to find out about the development of visual arts in our region and compare its different manifestations,” he told The Slovak Spectator.

As far as the ethical ground of the display is concerned, Lukáč agreed with Polakovič that tolerance is indispensable for any cooperation, artistic or social.

“Tolerance can, and should, be taught and cultivated,” he said.

Tolerance in Art is available at the Danubiana Meulensteen Art Museum in Čunovo (15 km from Bratislava) daily, except Mondays, from 10:00 to 18:00, until April 26. Admission is €4.