HUMANISM and resistance against the regime he lived in – those were the main features of Dominik Tatarka’s literary works. The award that carries his name has, since 1995, been bestowed on Slovak authors for exceptional works that follow in his tradition of humanism. 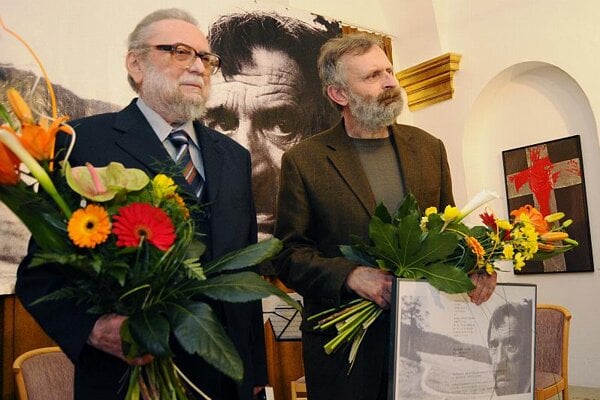 HUMANISM and resistance against the regime he lived in – those were the main features of Dominik Tatarka’s literary works. The award that carries his name has, since 1995, been bestowed on Slovak authors for exceptional works that follow in his tradition of humanism.

The 2008 Dominik Tatarka Awards were presented to poet Ján Buzássy and environmentalist Mikuláš Maňo Huba in Bratislava on March 13.

“After a long time we are awarding a poet,” Peter Zajac, the director of the Conservative Institute of Milan Rastislav Štefánik which organised the event, said in his speech, as reported by the TASR newswire.

Buzássy received the award for his collection of poems called Bystruška. The jury also took into account his activities as the editor-in-chief of Mladá Tvorba, a literary magazine which, under his leadership, resisted the process of 'normalisation' after the Prague Spring until 1970, when the magazine was banned.

Indeed, there are not too many poets among the laureates of the Tatarka Award.

“Tatarka was a poet as well, though he was writing in prose,” Buzássy said in a reaction to the jury’s choice to the Sme daily. “It is not a traditional realist prose, however, but a poem in long lines and several pages; there are many lyrical elements and mainly a great melody in his style.”

Buzássy remembers Tatarka from his visits to his house as a “man of great dimensions and great topics, in which his contacts with the world’s authors resonated, although at home he was already erased from official artistic life”.

“The way he talked was breathtaking, as if you were listening to a man who tells prophecies,” the poet said about Tatarka.

Huba received the award for his publication Ideal-Reality-Myth (Ideál-Skutočnosť-Mýtus), which documents the story of a group of people from Bratislava who devoted their lives to protecting the environment from 1975 to 1989. Huba is someone who might be seen as the storyteller of the environmental movement rather than as an activist, but the fact is that he was the one who pushed the movement forward, Sme reported.

“I used to tell to myself that if I was to receive an award, I would probably like this one the best,” Huba told Sme, stressing that the award does not belong only to him but to the whole environmental movement.

“Dominik, and this is often neglected, represented a special, integrating personality,” Huba said. “He was an earthy man who got to the reality of the countryside and through all the myths, and on the other side he was a globetrotter, far outreaching the format of our country. He connected what usually divides Slovakia – the rural and the urban, even cosmopolitan worldview; he masterly integrated these two poles.”

This is the message Tatarka’s personality sends to our times too, according to Huba.

“Maybe it’s just the slouch of the conservative countrymen who are not willing to look around the world and the cosmopolitans who do not like the smell of the countryside,” he told Sme. “This is also what our protection of the environment was about, since that’s where I see the connection between Dominik’s personality and our efforts.”