THE CONSTRUCTION sector, which had been enjoying a boom until a few months ago, is now having to face the impact of the global economic downturn like every other sector of the economy. But while construction companies expect a drop in the private investment which was behind the recent vibrancy of the industry they hope that the state will now step into the breach. 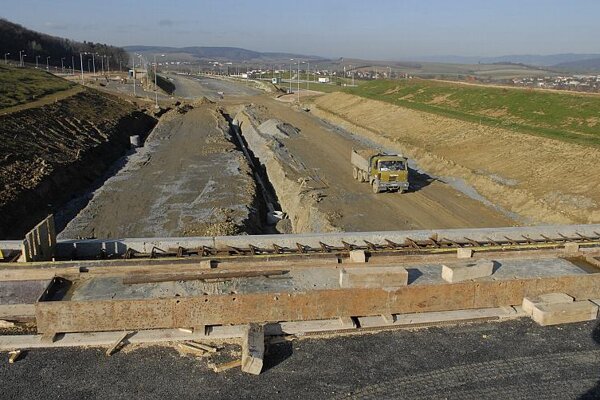 THE CONSTRUCTION sector, which had been enjoying a boom until a few months ago, is now having to face the impact of the global economic downturn like every other sector of the economy. But while construction companies expect a drop in the private investment which was behind the recent vibrancy of the industry they hope that the state will now step into the breach.

Despite this hope, the construction sector is not expecting a repeat of its successful performance in 2008 - either this year or next.

ZSPS estimates that the economic downturn may reduce the production of the Slovak construction industry in 2009 by 10 percent compared to last year. For the next three years ZSPS predicts a decline in residential construction due to a drop in investment in the segment. The non-residential segment is expected to decrease as well.

“But what is important is that our prediction speaks of a significant increase in civil engineering,” said Majerský. He expects an increase in particular in road and railway infrastructure, where European Union (EU) funds might be used. Another opportunity is PPP projects.

Majerský called for the industry not to fear the crisis, as it could be a productive opportunity, and said it was necessary merely to remove the flavour of catastrophe.

“This is a slogan which gives a bit of optimism, because the crisis can give us opportunities as well as threats,” he said.

According to Majerský, the crisis is forcing construction companies to restructure, to become better organised and to make their operations more effective. The crisis is also solving the recent labour shortage problem, as a number of skilled and experienced workers are returning from abroad.
ZSPS sees directing public funds into market segments with guaranteed demand as the main solution for mitigating the impact of the crisis.

“We regard pouring public finances into the development of transport infrastructure, into increasing the energy efficiency of buildings, the construction of rental apartments, and environmental and energy construction as cardinal solutions,” said Majerský. “All these are sectors where demand already exists.”

The development of transport infrastructure is seen as very promising. This is because Slovakia can draw money from EU funds as well as asking private investors to join in through public-private partnership (PPP) projects. Slovakia has three PPP project packages for highway construction in various stages, the preparations for which had started before the global economic downturn struck.

The three PPP packages should result in about 157 kilometres of highways and dual carriageways being built to join the more developed west with the less developed east of the country.

“Slovakia needs highways and dual carriageways like a dose of salt,” Ľubomír Palčák, the director of the Transport Research Institute (VÚD), based in Žilina, told The Slovak Spectator in an earlier interview. “Analyses which we have made of the impact of the acceleration of highway construction have shown huge economic effects.”

On March 23, after about two months’ delay, Minister of Transport, Posts and Telecommunications Ľubomír Vážny signed a concession contract with Fadi Selwan, president of Vinci, one of the companies forming the consortium which won the tender for what is known as the second PPP project package, the SITA newswire wrote.

Under this contract, the consortium of Vinci Concessions and ABN AMRO Highway will prepare documentation and build almost 52 km of dual carriageway between Nitra and Banská Bystrica. This includes a 12.6 km-long stretch between Nitra and Selenec, from Selenec to Beladice (about 19 km), from Beladice to Tekovské Nemce (14.3 km) and the northern bypass of Banská Bystrica (about 5.7 km).
“In this time of economic crisis, this project is a great advantage since it will create almost 1,500 jobs this year alone,” President Ivan Gašparovič said, as quoted by SITA, after he had been briefed by Vážny about the contract.

The consortium won the tender with a bid of €1.5 billion, of which €930 million are direct costs linked to construction and the rest are costs linked to the operation and maintenance of the dual carriageway during the 30-year concession. The state should pay the consortium a total of €3.465 billion including interest during this period, according to the ČTK newswire.

Vážny did not specify exactly when construction of these stretches would begin or be completed, as this is subject to further negotiation. According to the original plans, the individual stretches of the dual carriageway – known as the R1 - should have been finished by November 2010 and the northern bypass of Banská Bystrica by September 2011.

But there will be some delay relative to the original bid terms since the contract, because of the situation on international financial markets, was not signed by the end of January as had been originally planned. Vážny said he expected the consortium to take over the construction site during the third week in March.

“The first preparatory works will be covered from the capital of the winning consortium,” Vážny said, as quoted by SITA. He added that he expects financial coverage for the project to be settled by June.

“We assume that we will be able to sign the concession contract [for the first PPP project package] in about one month,” Vážny said, as quoted by SITA.

A consortium led by French company Bouygues Travaux Publics was announced in mid February as the preferred bidder to construct and operate 75 km of the D1 highway between Martin and Prešov, known as the first PPP project package.

The preferred consortium submitted a bid of about €3.3 billion, with €1.63 billion, excluding VAT, accounting for construction works, according to SITA. The contract, again for 30 years, is to project-manage, build, fund, operate and maintain five sections of the D1 highway, also known as the northern connection, between Bratislava and Košice, from Dubná Skala to Turany, Turany to Hubová, Hubová to Ivachnová, Jánovce to Jablonov, and Fričovce to Svinia.

The least advanced PPP project is the third package. This includes 29 km of the most technically-demanding sections of the D1 highway between Žilina and Martin.

ZSPS welcomed the signing of the first concession contract, but said PPP projects are only a partial measure and will not solve the entire construction industry’s downturn-related problems.

“One [Slovak] company will thrive as a result of the first signed concession contract, but there are other companies which are still looking for work,” Ján Nemec, the head of the ZSPS office told The Slovak Spectator. He also pointed out that the selection of winners and signing of concession contracts are time-consuming processes.

ZSPS is now trying to get more public money invested in insulating older buildings. Nemec stressed that this would bring a number of effects. Apart from maintaining jobs in construction and maintaining the production of building materials, the work would increase buildings’ energy efficiency and reduce heating bills.

Insulating obsolete buildings is a particularly labour-intensive form of construction work.
“Compared to highway construction, where machinery is used on a large scale, insulating buildings is arduous,” Nemec told The Slovak Spectator. “Thus, for much less money a much greater labour force can be employed. Moreover, insulating projects can be started very quickly. It is now no longer the question of whether to pour money into the insulation of old buildings that is being addressed, but how.”

At one of its next sessions, the government’s Council for the Economic Crisis will deal with a general state programme to make the insulation of obsolete buildings more attractive. Apart from making state support less administratively demanding to obtain, the government is expected to allocate additional funds under the programme.

Slovaks want to have their houses insulated

For Slovaks the energy efficiency of buildings is no longer an unknown concept, but in upgrading its buildings Slovakia still lags behind the older EU members as well as the Czech Republic.

“The awareness of Slovaks has improved significantly,” Anton Novotný, the executive director of the Association for Insulation of Buildings, a civic association, told The Slovak Spectator. This is demonstrated by the fact that applications for state support in this segment exceed available funds.
“The State Fund for Housing Development has registered applications for this support which exceed the planned budget by 62 percent,” said Novotný.

The fund, whose budget for renovation of housing units amounts to €26.56 million this year, has received applications for €93 million, the TASR newswire reported on March 24.

No exact statistics exist for how many buildings have been insulated so far or how many need additional insulation. But the association estimates that about 10 to 15 percent of all buildings (including family houses and apartment blocks, as well as non-residential buildings) have been insulated to date. Adding insulation may increase the energy efficiency of 600,000 apartments in blocks built before 1992, 600,000 family houses and 12,000 non-residential buildings. The association estimates that additional insulation can decrease consumption of heat by between 45 and 58 percent depending on the year of construction and the shape of the building.

According to Novotný, the insulation of buildings’ walls and roofs and changing their windows are measures which would also help Slovakia to meet targets under an energy-climate package adopted in December 2008. Within it, EU member states promised to reduce emissions of greenhouse gases and increase energy efficiency by 20 percent by 2020.