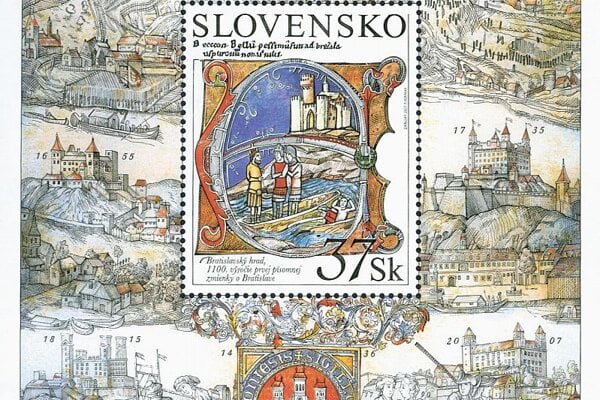 An expert jury awarded first place to Slovakia for its 2007 book of stamps of “Bratislava Castle”. The artistic design is the work of Dušan Kállay and the steel engraving was completed by František Horniak, one of the top Slovak engravers.

The head of the jury and president of WIPA, Gerhard Dussek, said that the stamp’s premier artistic quality and its high-class processing convinced the jury to choose the Slovak stamp as the absolute winner. Slovak Post will receive the award during the festive opening of the Austrian national exhibition ÖVEBRIA on September 11.

The winning stamp shows the detail of a Gothic book painting from a Vienna picture chronicle dating back to the 14th century. When making the design, Dušan Kállay was inspired by an historical event at Bratislava Castle in 1052 when Henry the Black besieged Bratislava for eight weeks but failed to conquer it. The defenders of what was then called Pozsony had introduced underwater warfare and, to Henry's consternation, sunrise found his ships resting on the bottom of the Danube. The celebrated hero of this undertaking was a diver named Zotmund.

The stamp also depicts the development of Bratislava Castle over four centuries based on graphics of old masters. The city’s coat of arms appears on the lower part of the booklet.

Slovak Post issued the stamp in limited circulation on June 27, 2007. The stamp celebrates the 1100th anniversary of the first written record of Bratislava. The nominal value of the stamp is Sk37 (€1.23).

This is the third time that Slovak Post has won first place in competitions for the most beautiful stamp in the world. The best stamps worldwide have been selected at the international WIPA exhibition since 1981.