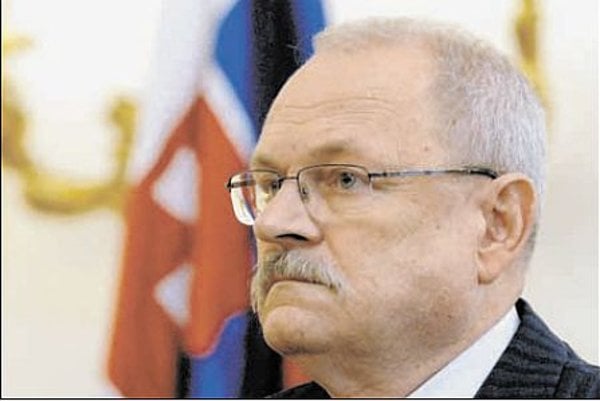 Gašparovič won the second round of the presidential election after collecting 55.53 percent of the votes. His challenger Iveta Radičová, the joint candidate of the parliamentary opposition parties, won 44.46 percent of the votes on a 51.67 percent turnout, according to the official results announced by the Central Election Commission on April 5.

“This is the most direct evidence that the citizens trust us,” said re-elected President, Gašparovič, speaking alongside Prime Minister Robert Fico and Speaker of Parliament Pavol Paška, both members of Smer, who came to Gašparovič’s election headquarters to congratulate the winner.

“I am very glad that I do not have to open the envelope into which, about one and half months before the presidential election, I inserted my speech and preparations to inaugurate a new president of Slovakia on June 15, as is my duty according to the constitution,” Paška told the press. “I am glad that we will only have to fight the [economic] crisis.”

Fico suggested that Slovakia now faces another period of stability thanks to the re-election of Gašparovič.

“I am glad that at a time of crisis I can turn to a president who understands social problems,” he said, as quoted by the SITA newswire.

Fico his used election night appearance to pan Slovak journalists, in particular those in the print media, for what he called “all the slurs, deceit, and accusations levelled at President Ivan Gašparovič”.

Fico said he would devote special attention to the media and its behaviour in the run-up to the election during a scheduled press conference on April 6.

After the unofficial results were published shortly after midnight, Radičová congratulated the re-elected head of state and called on her supporters to respect the result of the elections, SITA reported.

“Truth and fairness will win out - and I believe in this,” she told the crowd of her supporters and friends on election night, SITA wrote.

According to Radičová, Gašparovič also won thanks to the support of the strongest political party, Smer, and its leader, the most popular politician, Robert Fico. She added there had been cards played in the campaign that belonged to the previous century, and said that topics she thought were crucial in the presidential campaign did not get enough space in public discussion.

Radičová did not rule out running in the next presidential election, if she still felt she had the support of citizens.

“He would become even more relaxed because his life-long status would be secured,” Comenius University political analyst Miroslav Kusý told The Slovak Spectator. “For the next five years he would be in that position quite painlessly. Presumably, it was the condition under which Smer and the Slovak National Party (SNS) supported him: that he would be a convenient president who in the end nods to everything.”

Gašparovič had said that he would be the one who ‘preserves stability’, which translated into political language, according to Kusý, meant that he would preserve the current status quo.

As for the contributions that Radičová would have made to the presidential office, Kusý said that the first and most significant change would have been that Slovakia would have had a female president, “which in itself is a very strong motivation.”

The second factor, Kusý said, is that someone untainted by a communist past would have made it to the presidency.

“All the previous presidents have been burdened by a communist past,” Kusý said.

The president of the Institute for Public Affairs (IVO) think tank, Grigorij Mesežnikov, said that during the run-up to the second round of the election it was the SNS who did the campaigning with the silent agreement of Smer, using the argument that power needs to be concentrated in the hands of one political grouping in order for social problems to be solved more easily.

“It is a misleading argument, which contradicts the spirit of democracy,” Mesežnikov said.

And Mesežnikov did not think that the way Gašparovič would rule during his second term would change.
“He always acts as a loyal supporter of the forces which nominated him to power,” Mesežnikov told The Slovak Spectator.

According to Mesežnikov, Gašparovič inclined to Smer from the very beginning and when the parties made it to government, he became a de facto, if informal, member of the ruling coalition.

“Robert Fico knows very well why he wants him [Gašparovič] to be the president,” Mesežnikov told The Slovak Spectator. “There are no programmes or any content behind his choice, but purely the mechanics of power. Fico needs the security of a loyal partner in this position and, most importantly, so that after the 2010 elections Gašparovič will charge him with forming the new cabinet. This is the name of the game, nothing else.”

Mesežnikov said that Radičová could have changed the atmosphere in society, which is now witnessing “inconsiderate pragmatism, a technocratic approach and cronyism, and quite brutal methods of political power”.

“This is first of all the result of the activities of the ruling coalition,” said Mesežnikov.

Of course the president does not have the authority to intervene in the execution of power but by virtue of the fact that he or she can highlight these phenomena, criticise them, appeal to the public and present alternatives, the president can change the atmosphere in society, Mesežnikov said.

He suggested that Radičová as president could, for example, prevent the worst political expressions and “perhaps this is why the SNS has been using the Hungarian card in such a primitive and hysterical way. Because they themselves know that today they have a president who accepts everything from the billboard tender up to the raging anti-Hungarian campaign,” Mesežnikov said.
According to Mesežnikov, Gašparovič is a person who perhaps internally disagrees with certain things, but has openly never criticised the government: on the contrary he has always supported it and praised its results.

As for Radičová, Mesežnikov does not think that she would have intentionally provoked a confrontation: “she is a completely different person; firm in principles but cooperative. This is what she indicated in the campaign, that she would be able to cooperate, something which Smer intentionally misinterpreted as her yielding.”

This demonstrated her sense of responsibility, because the constitution assumes the cooperation of all constitutional representatives, said Mesežnikov.

“I think that her term would be characterised by a clear attitude towards the solution of problems and careful fulfillment of duties and cooperation with other constitutional representatives,” said Mesežnikov.

The first round and its surprises

The other five first-round candidates came in some way behind the leading two: František Mikloško, backed by the Conservative Democrats of Slovakia (KDS), collected 5.41 percent of the votes cast; Zuzana Martináková, running as the candidate of the non-parliamentary liberal Free Forum (SF), received 5.12 percent; Milan Melník, supported by the third party in the governing coalition, the Movement for a Democratic Slovakia (HZDS), followed with 2.45 percent; former Communist Party (KSS) MP Dagmara Bollová, running as an independent candidate, polled 1.13 percent; and Milan Sidor, the official KSS candidate, came in last, with 1.11 percent of the vote.