Millions in agro–subsidies paid out against EU rules

WHEN Miloš Šebo’s Fructop fruit company failed to qualify for agricultural subsidies last year, he did not take the decision lying down. He wrote a letter to the Agricultural Payments Agency (PPA) on October 20 complaining that his farm had, through no fault of his own, failed to achieve the required revenues due to “unfavourable climate influences”. 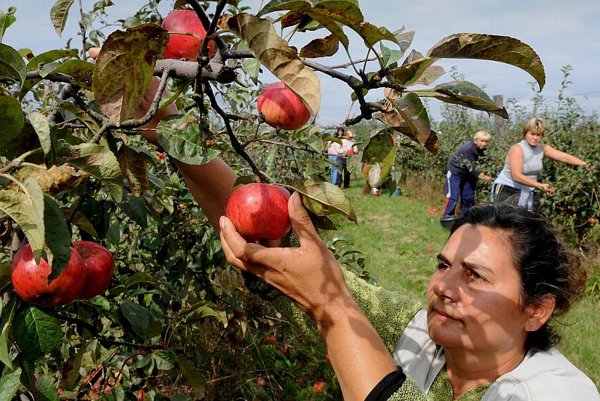 WHEN Miloš Šebo’s Fructop fruit company failed to qualify for agricultural subsidies last year, he did not take the decision lying down. He wrote a letter to the Agricultural Payments Agency (PPA) on October 20 complaining that his farm had, through no fault of his own, failed to achieve the required revenues due to “unfavourable climate influences”.

Under EU rules, the more than €400 million in European and Slovak public funding that Fructop and some 2,000 other applicants are vying for are supposed to be distributed without discrimination. And, strictly speaking, every farmer in Slovakia is equally at the mercy of the weather, so there is no reason why one project should have climate damage taken into account while the others do not.

But on December 19, at the third sitting of a PPA commission set up to judge funding requests, Fructop’s appeal was upheld. Its point total was raised from 55 to 75, putting it over the 73 point threshold for funding, “due to forces beyond human control”. Fructop now qualified for the Sk40.5 million (approximately €1.35 million) in funding it wanted, even though the “beyond human control” principle was applied to no other applicant.

The European Commission sets very clear rules for distributing agricultural subsidies, and according to these rules, Fructop’s bid should have been rejected. According to Michael Mann, the EC’s spokesman for agricultural issues, exceptional events such as acts of God may be taken into account in judging applications, but only if the overall funding programme is aimed at helping farms recover from a wider environmental catastrophe.

“Production damages can be a relevant criterion in the case of intervention for restoring agricultural production potential damaged by natural disasters,” he said. “However, this measure is not included in the Slovak Regional Development Plan.” The programme that Fructop was applying to is Farm Modernization.

So how do we explain the success of Fructop, or of the dozens of other applicants who had their points totals adjusted by the PPA commission based on apparently subjective grounds?

The Agriculture Ministry is controlled by the Movement for a Democratic Slovakia (HZDS), part of the ruling coalition. Did it help Fructop’s application that co-owner Miloš Šebo accompanied Deputy Education Minister Jozef Habaník (HZDS) and two other HZDS politicians on a trip to Russia in 2007?
“I know you’re trying to insinuate that I have political contacts, but you’re dead wrong,” Šebo said. “I met these people [leading the Russia trip] for the first and last time in my life.”

Šebo said there was nothing unusual in the fact that he alone was awarded extra points for crop damage. “We were maybe the only ones in Slovakia to have our whole orchard freeze. Everyone else had a crop, and we were handicapped.”

Agriculture Ministry spokesman Stanislav Háber argued that situations arise in which applicants should have received more points, but for “concrete and objective reasons” they did not. Such situations include natural disasters or “acts of God”, such as the death of livestock, as well as failure to apply for points for which one is eligible, or halts in production. In such cases, Háber said, the PPA commission can award an applicant more points.

Like the Mäspoma Zvolen meat company, which in two cases convinced the commission that it had simply forgotten to apply for points it should have received. In both cases, the extra points the commission awarded put Mäspoma in a position to receive millions in subsidies.

Here again, the PPA appeared to have violated EC rules, which say that all applicants get a single and equal chance to get their projects right, and if they get them wrong – bad luck. “Modifications should not be allowed after the submission of the project,” said Mann.

The majority owner of Mäspoma is Ján Kolesár, who ran as a candidate for the Slovak National Party (SNS) - which, like the HZDS, also forms part of the current ruling coalition - in the 2006 elections. A stake is also held by Miroslav Abelovský, formerly an attorney for HZDS leader Vladimír Mečiar and an MP for the HZDS, elected in 2002.

“This is not the kind of thing I want to talk about over the phone,” Kolesár said. “Don’t you want to write about what was going on at the PPA four years ago [under the previous Mikuláš Dzurinda administration], when we received the required number of points but were simply rejected?”

Then there is the case of the EKO OR firm, which argued that its points awarded for farm revenues should be increased because “once our project is carried out we will have higher revenues”. At 70 points, EKO OR was just below the 73 points needed to get subsidies; the commission agreed, and gave the company an extra 10 points.

“The evaluation criteria are relatively abstract, which is why when uncertainties arise, they are judged by the commission” Háber wrote. However, the handbook for subsidy applicants is actually quite concrete on the topic of revenues – it refers to “revenues recorded… during the most recent financial year”.

In other words, it does not cover revenues that farmers predict they will receive after they get a subsidy.

“The evaluation of a project must be done on the basis of procedures and criteria clearly defined and established at the moment of opening the measure for potential beneficiaries,” said Mann.

But there were many such economic clairvoyants among the successful applicants. Italian native Diego Roda, who moved to Slovakia in 1994, had extra points awarded for four projects (representing Sk122 million - about €4 million - in subsidies), even though his original submissions fell far short of the required revenues. “Once the project is implemented, revenues will increase,” he argued. The commission made him eligible for another Sk 23.5 million (approximately €780,000) by allowing him to recalculate his points total; by the end of March, all contracts on all five projects had been signed.

Diego Roda was not the only foreigner who successfully appealed to the commission. Austrian native Eugen Hinrichs-Schramm, who is heading a €30-million bio-fuel investment near Komárno in southern Slovakia, originally did not gain enough points to become eligible for Sk338 million (approx.

€11.22 million) in subsidies. However, after he told the commission he had neglected to apply for extra points, he was awarded another 10 points for four of his five projects, putting all of them over the limit.

At a meeting in Bratislava, the Austrian investor told The Slovak Spectator that he had discovered by talking to other applicants that he had neglected to apply for all of the points he was eligible for, and had submitted an explanatory letter to the PPA.

Curiously, at least one member of the PPA believed the applications should have been rejected.

According to the employee, who spoke on condition of anonymity, Hinrichs-Schramm was requesting subsidies for five companies that each played some role in turning rapeseed into oil. The problem was that not every company added value to the agricultural production process, which was the condition for winning subsidies.

“If the applicant thinks that cleaning and drying seeds can be qualified as processing them, he is wrong, because the product that results is not a finished product,” the official said. “Have you ever eaten rapeseed or a sunflower seed straight from the silo? If this project is approved, it will violate the commission’s statutes.”

The official suggested that Hinrichs-Schramm had artificially increased the number of companies involved in the production process in order to increase the amount of subsidies his oil operation could receive. Applicants are eligible for a maximum of Sk84.5 million (approximately €2.80 million) in subsidies per project.

“On the one hand it may appear that we are trying to maximize our potential subsidies, but I can assure you that each company has a different scope of operation,” said Hinrichs-Schramm. “One of the main reasons we formed a separate company for each operation was that it makes it easier to find a strategic partner for that operation.”

Of another of Hinrichs-Schramm’s projects, the PPA employee said that “the applicant submitted erroneous and false information to the PPA, for which the project should have been rejected.” Nevertheless, the commission awarded the projects more points and recommended they be approved. Hinrichs-Schramm denied knowledge of any false information, and said the key problem was that the rules in the PPA handbook for applicants were “unclear and rather vague”.

Of the 2,277 applications for subsidies under the Farm Modernization and Adding Value to Agricultural Production programmes, only 87, or 3.8 percent, were dealt with by the commission in its first three sittings at the end of last year (the minutes from a fourth sitting have not yet been written). Of these, the commission recommended that 60 be awarded extra points.

All of the applicants had the same chance to fill out their forms properly, just as they faced the same economic and weather conditions in doing business. Is it fair that some were allowed to claim extra points after the applications were in?

But according to the EC’s Michael Mann, it’s a question with a concrete answer. “The special commission is established to act in exceptional cases when the success of the programme is in danger. What is exceptional has never been defined but common sense should apply. Recourse to the exceptional procedure has to be limited. If this is not the case, the whole procedure has to be reexamined.”