THE RESULTS of the first round of the presidential election left the two successful candidates – the incumbent president Ivan Gašparovič and his challenger Iveta Radičová – with more or less equal chances of becoming the next president of Slovakia. With less than 9 percent difference in the ballots cast for each of them in the first round, analysts predicted some ‘hot stuff’ in the campaign tactics before the second round – and the days that followed proved the analysts right. 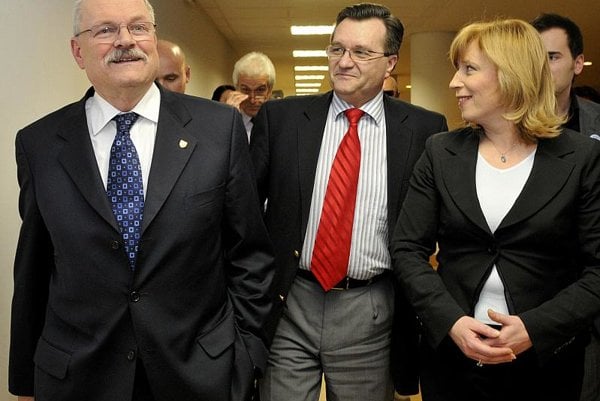 The two candidates prepare to face each other on TV (Source: ČTK)
Font size:A-|A+  Comments disabled

THE RESULTS of the first round of the presidential election left the two successful candidates – the incumbent president Ivan Gašparovič and his challenger Iveta Radičová – with more or less equal chances of becoming the next president of Slovakia. With less than 9 percent difference in the ballots cast for each of them in the first round, analysts predicted some ‘hot stuff’ in the campaign tactics before the second round – and the days that followed proved the analysts right.

In the last week of March 2009, political experts say, Slovaks saw much more ‘heat’ than one might have expected in a routine election campaign – there were personal invectives, mysteriously appearing leaflets from no known source, inappropriate statements by the highest state representatives and political parties, playing of the ethnic Hungarian card and even falsification or rewriting of history.

Televised debates between the presidential contenders, which are not as all-important in election campaigns in Slovakia as in some other countries such as the US, began just six days before the actual second round of balloting.

But after they began, the electoral campaign was consumed by these televised duels and, according to political analyst Grigorij Mesežnikov from the Institute for Public Affairs, in the midst of these personal fights and the playing of the Hungarian card by the supporters of Ivan Gašparovič the candidates’ campaign teams did not pay attention to other forms of campaigning. While the televised sparring contributed to each candidate’s image by making them express their opinions on various topics resonating within society, Mesežnikov said the debates’ importance should not be overestimated as there are other, long-term factors that shape the decision-making of voters.

“The debates showed that Gašparovič, his team and his supporters had become nervous, because their estimation of an easy victory had proven premature and so it became necessary to really fight for the votes,” Miroslav Kusý, a political analyst, told The Slovak Spectator. “They took that as a need to make their attacks more intense, more rowdy, and to add some unfair hits, lies and so on. It acquired somehow a yellow-press character, this campaign.”

Campaign sheds some light on the past

The intensity of the attacks and the irrationality of some of the arguments were particularly exposed in relation to the strong support expressed by Slovakia's Hungarian-speaking minority for Radičová. (See also story on pg 1)

But while Radičová rejected any connection on her part with extremist ideas about Hungarian autonomy and the fake campaign literature that was linked to it, Gašparovič was mainly expected to answer questions about his past, especially during the early years of Slovak independence when he stood firmly at the side of former prime minister Vladimír Mečiar, as the Speaker of Parliament.

When controversial cases such as that involving former MP František Gaulieder came to the forefront, Gašparovič reacted nervously and tried to avoid any extensive discussion of his history.

He tried to counterpunch with remarks about Radičová’s political past as a member of SDKÚ, a party which was alleged to have bought the votes of MPs at the end of Mikuláš Dzurinda’s second term as prime minister.

According to Kusý, Gašparovič tried to use the controversies connected to SDKÚ in his campaign against Radičová, but he could not find anything really effective.

“On the other hand, his past is full of problematic points; also because he is a generation older,” Kusý said, listing Gašparovič’s switch between political parties in 2002, his personal failures as the General Prosecutor of Czecho-Slovakia, and his close alliance with Mečiar over many years.
“This is something he cannot deny, although he is trying to fog it; and the fact that he reacts nervously only shows that these are questions he doesn’t like,” Kusý added.

Loyalty to a political party was one of the arguments Gašparovič used against Radičová, suggesting that he was the candidate of the citizens while she was a member and deputy chairman of SDKÚ.

“She could have left the political party,” Gašparovič said on the private TV channel TA3. “Because of that, she is the candidate of that political party. I’m not.”

Radičová said she did not leave the party before the election because she doesn’t “play false games”. She stated she would leave the party in the event that she was elected president.

Gašparovič argued that he had left his political party, the Movement for Democracy (HZD) before the 2004 elections, but it was later pointed out that he had actually done so only after winning the election.

During this presidential election Gašparovič has remained in the post of honorary chairman of the HZD and has also enjoyed the full support of two ruling coalition parties, Smer and the Slovak National Party (SNS).

And on March 25 he told a meeting of Smer party members in Košice: “We are here alone, so I can say that I’m practically like a member and my failure would be the failure of Smer.” His words were captured in a video recording of the event and published by the SITA newswire.

The very existence of the Slovak Republic made it onto the list of frequently mentioned topics during the 2009 campaign. In 1992, when the separation of Czecho-Slovakia was being discussed, Gašparovič was part of the political grouping (composed primarily of HZDS and SNS politicians) which supported and eventually made it possible for Slovakia to achieve its independence. That Radičová was active in a group that was opposing the division of the country and took part in collecting signatures for a petition asking for a referendum on this issue was used against her by Gašparovič’s supporters as proof of her negative feelings towards an independent Slovakia in the campaign.

“Mrs Radičová doesn’t like Slovakia and the Slovaks,” said Anna Belousovová, the vice-chairman of SNS at a party session on March 28.

In the debate on TA3, Radičová admitted she belonged among those citizens who “had their concerns” about an independent Slovak Republic, adding that this was the prevailing mood in the whole of society at that time, as all of the political parties, except for the SNS, had maintaining the common state in their programmes. After the separation there had been serious problems, Radičová said, but Slovakia managed to overcome its handicap and catch up with Europe.

“Today, after these years, I’m glad it happened, although I’m sure that the price [for the independent state] could have been lower,” she said during the debate, alluding to Gašparovič’s role in the controversial practices of Mečiar’s ruling coalition in the 1990s.

“Which country didn’t have these kinds of problems after the fall of the Berlin wall? All of them…” Gašparovič responded about the 1990s.

While in most cases Gašparovič defended himself by attacking his opponent, Radičová tried to avoid direct confrontations as long as she could. Analysts claimed she was perhaps too mild in her reactions to Gašparovič’s accusations.

“Her campaign was non-confrontational, focused really on the present and the future and not on fishing for cases from the past,” Mesežnikov told The Slovak Spectator. “But I think that, especially if the opposing candidate uses such unfair methods, it would have been desirable to stress the problematic parts of his past. Because that’s where things are encoded that can negatively influence the function of the president.”

Events from the 1990 disqualify Gašparovič for any political function, more so for the presidential one, Mesežnikov flatly stated.

“The fact that he was elected accidentally in 2004 as the ‘lesser evil’ doesn’t mean that he is ‘amnestied’ for what he had done as the Speaker of the Parliament when he really dismantled the basics of democracy,” he added.

In Kusý’s opinion, Radičová’s non-confrontational tone could have been due to her personal character as well as a campaign tactic. He said that if both candidates were moderate in their reactions, the campaign would have been boring and if both were aggressive, the campaign would have sharpened up and the decisive factor would be the candidates’ aggressiveness and willingness to be unfair.

“In this situation I think it was a beneficial campaign approach for Radičová – she kept calm, didn’t enter into attacks, didn’t answer attacks with counter-attacks and tried to appeal to rational and cool thinking [people],” Kusý told The Slovak Spectator.

Mesežnikov also thought that Radičová came out of the TV duels as the winner, saying that she gave better arguments, was calmer, more convincing, non-confrontational and always able to present a clear position on serious issues.
Despite their assessments of the candidates’ campaigns, both Mesežnikov and Kusý stated that they believed Gašparovič remained the favourite before the actual balloting was to begin.