She and He still not equal

ALTHOUGH gender equality, or rather inequality, is definitely not topic number one on the agenda of Slovak politicians, the social reality – especially the fact that there were three women running in the first round of the presidential election and one of them received enough votes to advance and become a serious challenger to the incumbent president – shows that gender issues are beginning to find their place in public discussion. 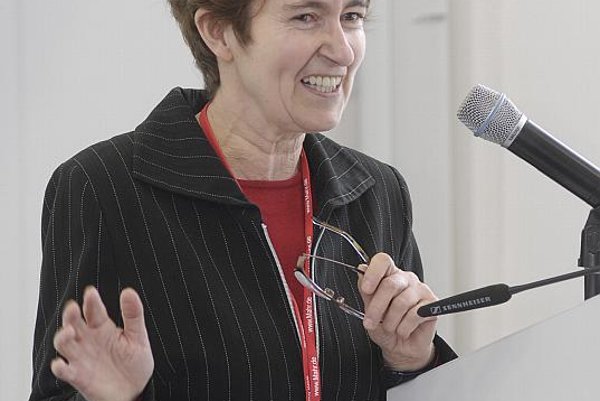 ALTHOUGH gender equality, or rather inequality, is definitely not topic number one on the agenda of Slovak politicians, the social reality – especially the fact that there were three women running in the first round of the presidential election and one of them received enough votes to advance and become a serious challenger to the incumbent president – shows that gender issues are beginning to find their place in public discussion.

A team of researchers from the Institute for Public Affairs (IVO) have spent three years working on a project named Plus for Women 45+ funded by the European Union’s EQUAL Initiative. They recently published their findings in a book named She and He in Slovakia, Gender and Age in the Period of Transition, featuring topics that reflect on the gender order of Slovak society and show the image of the ideal woman and ideal man in Slovakia. In many respects it is a continuation of the previous study, She and He in Slovakia, Gender Issues in Public from 1996.

The Slovak Spectator spoke to Zora Bútorová, the head of the research team and the editor of the publication, about gender inequalities, gender and age-based discrimination and Slovakia’s degree of readiness for a female president.

The Slovak Spectator (TSS): In what ways do gender inequalities show up in Slovak society – are they more substantial in family life or in the business environment?

Zora Bútorová (ZB): Gender inequalities in both spheres are interconnected. Everything starts in the private sphere. In a typical Slovak family, the man is seen as the principal breadwinner and the woman plays the role of the homemaker, which means that most of the work related to household chores and looking after family members remains on the shoulders of the woman. Although this traditional model has been frequently criticised, it has survived changes of several political regimes including the fall of communism. Today, employed women spend 16 more hours on unpaid domestic work while men spend 4 more hours on paid work per week. Altogether, the average employed woman in Slovakia works 12 hours more than the average man. And obviously, such a double burden limits her advancement in the public sphere – both at work and in politics.

Our book brings forth many facts about these issues. Let me illustrate a few facts by giving you answers to several questions. Are women more concentrated in low-wage sectors, industries and professions? Yes, they are. Is there a substantial pay gap between Slovak women and men? Yes, it is even one of the greatest within the EU. Are women under-represented in managerial and decision-making posts? Yes, they are. Do they have good prospects for promotion? No, they don’t.

Today, these gender disparities are discussed more than ever before in Slovakia. However, concrete public policy measures that would promote gender equality in the labour market and enable women to better combine work and family life are still lacking.

TSS: In your research you have paid special attention to the category of women over 45. Why?
ZB: They have a very disadvantaged position in the labour market. What sets them apart from younger women, as well as from men, is the higher incidence of long-term unemployment, their lower educational attainment and lower interest in improving their qualifications, and their greater exposure to discrimination in the workplace. Most of these women, especially in regions with few job opportunities, realise their vulnerability and are ready to make financial concessions to keep their jobs. Even women with higher educations have a more fragile sense of employment security. To be a woman in her mature years is not a big advantage, especially in the corporate sector, which tends to be a hotbed of ageist prejudices.

We argue in our book that such stereotypical attitudes towards workers over 45 are not only unacceptable but also counterproductive. Slovak society is ageing and our employers face challenges similar to other European countries: to promote the working ability of ageing workers and to meet their specific needs. Only this approach can enable employers to fully benefit from the potential of older employees – from their experience, their reliability and loyalty to an organisation. Obviously, embracing the concept of active ageing will be neither quick nor easy. It calls for a partnership and involvement of many stakeholders, including the government, corporations, workers and their organisations, research and educational institutions, the media, and, last but not least, ageing women and men themselves.

TSS: What is Slovakia’s position among the EU countries regarding women’s representation in politics?
ZB: Compared to other countries, women in Slovakia were granted the right to vote relatively early, in 1919. Despite this, their participation in political decision-making is still rather low. Under socialism, formal quotas were in place regarding the appointment of deputies to parliamentary seats. As a result, women obtained over 20 percent of the seats. However, their representation was merely formal as it took place in an undemocratic framework under the power monopoly of the Communist Party. After the Velvet Revolution, the quota system was abolished and the share of women elected to the Slovak parliament in the first free elections in 1990 dropped to 12 percent.

Currently, women have 20 percent of the mandates in Slovakia and the EU average was 24 percent in 2008. The share of female MPs is much higher in countries such as Germany (33 percent), Spain (35 percent), Finland (41 percent) and Sweden (46 percent). The gender composition of the Slovak parliament is similar to that of France, the UK, or Italy but is more balanced that in the Czech Republic, Greece or Slovenia.

The representation of Slovak women in top executive posts in government is much lower than in parliament. Since 1989, the ratio of female cabinet members has never exceeded 15 percent. Although the current dominant coalition party, Smer, claims to be a social-democratic party, its leaders disregarded the principle of gender equality when forming the government.

With just one woman in the government, meaning 6 percent of the cabinet members, Slovakia lags well behind the EU average of 26 percent and its position is the second worst in the EU. Romania is at the bottom of the ladder with no woman in the cabinet.

The top positions again belong to countries such as Finland (60 percent), Spain (50 percent) and Sweden (45 percent).

The Slovak public is ready for a change: most people in Slovakia disapprove of the low political representation of women and believe that women’s say in politics should be equal to that of men.

TSS: The conclusions of your research say that increasing gender equality in Slovakia is a difficult challenge. Why is that so?

ZB: A typical feature of contemporary Slovakia is the gap between formally approved laws and strategic documents supporting gender equality and their implementation in practice. Until now, the good intentions have remained mostly “on paper”. The principal challenge is how to encourage the country’s political leaders and its public administration to take an active interest in eliminating gender inequalities.

Obviously, this lack of political will also reflects the insufficient pressure for change among women themselves. On one hand, women are critical of their status and opportunities in the labour market and in politics and are also more dissatisfied with the division of labour within the family. On the other hand, they tend to prefer a strategy of passive adaptation. Even those facing real discrimination in their workplaces do not have a clear idea how to defend their rights. Cases of women deciding to file a gender discrimination lawsuit are very rare.

In the last decade people in Slovakia have become much more aware of gender inequalities. However, the changes in the awareness of women and men have had a different pace. As our analysis shows, younger and more educated women are much more critical of gender inequalities than older women, while younger and more educated men resemble the generation of their fathers and see fewer reasons to change the status quo. In other words, the differences between the views of young women and young men are wider than within the older generation. This tension could spark a positive reversal, provided that women are sufficiently assertive in expressing their values and advocating their demands. And the numbers of such women are slowly, but surely, increasing.

At the same time, women cannot walk this path toward equal partnership alone: it also requires the participation of men – men who would not only admit the existence of gender inequalities, but who would also acknowledge the need for change and implement this change in everyday life.

TSS: Gender equality and the position of women in society has also been an issue in the presidential election campaign, as the challenger to the incumbent president in the run-off is a woman. Do you think that Slovak society is ready for a female president?

ZB: The unique feature of the 2009 presidential election was the presence of three women out of seven candidates running for the office. In 1999, there was one woman candidate who did not make it to the run-off and in the following election in 2004, no candidate was a woman. The strongest among them, Iveta Radičová, has been supported by three parties of the parliamentary opposition and by a smaller non-parliamentary opposition party. Although it is not easy to predict the outcome of the presidential election, one thing is clear: the very fact that Radičová was nominated by the overwhelmingly male leaderships of these parties, as well as her good results in the first round, give a positive signal about the readiness of Slovak society for a female president.

Surveys indicate that more women were among Radičová’s voters in the first round of the election. At the same time, the structure of her electorate also featured a higher proportion of men and women with higher educations, of white-collar workers and professionals, of urban dwellers, and of ethnic Hungarians. Regardless of the result, Radičová will have a strong impact on the public. She has strengthened her public visibility and credibility. As an outstanding professional and as a successful politician she could become a role model for young Slovak women and men who – as our study shows – rarely find any female role models among Slovak politicians.