ONE of the most discussed ownership stakes in the short but nevertheless rich history of privatisation in Slovakia is heading back to Slovakia after seven years in foreign hands. Slovakia has bought back its 49-percent stake in major crude oil pipeline operator Transpetrol from Yukos International for $240 million. 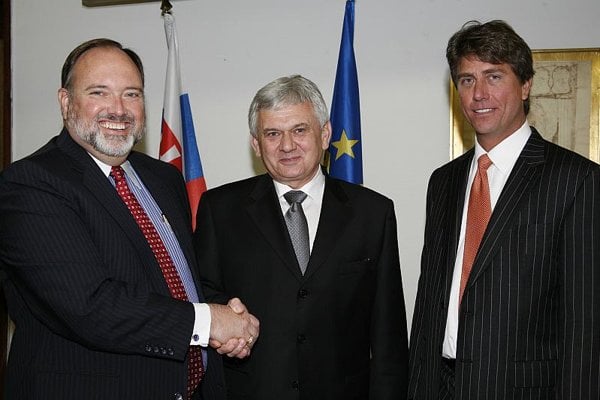 ONE of the most discussed ownership stakes in the short but nevertheless rich history of privatisation in Slovakia is heading back to Slovakia after seven years in foreign hands. Slovakia has bought back its 49-percent stake in major crude oil pipeline operator Transpetrol from Yukos International for $240 million.

On behalf of the Slovak government, Slovak Economy Minister Ľubomír Jahnátek signed the deal with Yukos top management in London on March 26. The transaction will be wrapped up after Slovakia’s antitrust authority seals the deal and Slovakia’s privatisation agency, the National Property Fund, takes a position.

Though observers agree that buyback of the share package of the strategic company was the right decision, opinions on what should come next for the investment differ with some preferring state ownership and some others a sale to a trusted investor. The answer is nevertheless clear for Prime Minister Robert Fico and Jahnátek: the state will keep the shares.

Besides, the prime minister, who called the buyback of the shares a great victory for Slovakia, suggested that Slovakia might even continue in its effort to reacquire previously sold shares in other strategic companies as well.

“Everywhere where we could succeed or there is room for regaining control over privatised shares, we would do so,” Fico said, as quoted by public broadcaster Slovak Radio. “We of course want to have peace and stability secured, so we would do it in a legal way, we would use means which are fully acceptable in international trade within the international framework.”

As for the Transpetrol shares, Fico said that it might help Slovakia to reduce its oil dependence on Russia. According to the prime minister, Slovakia would finance the buyback of the Transpetrol stake with state assets.

“We are only transferring state assets in cash into assets in the form of shares, i.e. it is extremely advantageous for Slovakia,” said Fico as quoted by SITA.

Radovan Ďurana of the economic think tank INESS – the Institute of Economic and Social Issues – said that the status and situation of the previous owner did not promise any fruitful future for the assets of the oil transit firm.

“On the other hand, the state in Slovakia has not appeared to be a good owner and manager either and thus it is very probable that the state will not be able either to fill the capacity of the pipelines, which are today being used at 50 percent,” Ďurana told The Slovak Spectator.

Slovakia has tried several times to buy back the Transpetrol shares.

The Slovak government sold the 49-percent stake in Transpetrol to Yukos in 2002 for $74 million and the foreign investor also gained managerial control over the company. However, Yukos found itself in financial trouble in 2003 when Russia decided the company owed back taxes worth $27 billion (Sk679.8 billion or €20.1 billion). In December 2004 Yukos sold its main production division, Yuganskneftegaz, to Russian state-owned oil company Rosneft in a forced auction. A Moscow arbitration court also granted creditors’ requests for a bankruptcy hearing and declared Yukos bankrupt on August 1, 2006. Then, in October 2007, a court in Amsterdam recognised Bruce Misamore and David Godfrey as the legitimate heads of the Dutch-registered company Yukos Finance.

“Following the unprecedented attacks against Yukos in Russia which forced the company into a false bankruptcy, the management of Yukos realised that it must develop a strategy to liquidate its non-Russian assets,” Claire Davidson, spokesperson of Yukos International UK B.V. told The Slovak Spectator. She went on to say that the liquidation of assets is intended to help over 60,000 Yukos shareholders – many in Russia, but also in the USA, Europe and Asia – affected by the company’s bankruptcy.

Yukos announced its intention to liquidate its 49-percent stake in Transpetrol in May 2005 and so advised its partner, the government of Slovakia, Davidson added.

According to Davidson, since then the management of Yukos Finance and Yukos International UK B.V. has consistently agreed that the purchaser must be a company that is acceptable to the government of Slovakia, the majority shareholder.

“We have been working with the government of Slovakia since then, alongside three consecutive Slovak ministers of economy, to try to accomplish a transaction,” Davidson said. “Our discussions became exclusive in 2008.”

Davidson said that the company had been in exclusive discussions with the Slovak government over the course of many months.

“The government of Slovakia indicated a strong interest in repurchasing the remaining shares as the majority shareholder and Yukos’ partner in Transpetrol,” said Davidson. “Also, given its unique knowledge of the asset we entered into exclusive discussions with them. As a result, both parties achieved a mutually agreed upon, acceptable price on a negotiated basis.”

Yukos International claims that there are no current proceedings that could put the transaction in question.

“Mr. Misamore and Mr. Godfrey have full authority to undertake this transaction,” said Davidson. “The ruling of the Dutch court on October 31, 2007 secured this authority. To our knowledge, there are no current proceedings that could void this transaction.”

Should the shares be held or sold?

According to Ďurana, the state should try to sell Transpetrol’s pipelines to a foreign investor. A state which neither trades nor processes crude oil could hardly fill the pipeline, he added.

As for Fico’s statements that similar acquisitions might follow in which the state would re-acquire shares in key companies, Ďurana doubts its positive impact on consumers.

“The ownership of the other privatised infrastructure is in the hands of owners who have been continuously investing in them, using and developing these capacities,” Ďurana said. “Ownership change in this case would bring no added value to the consumers, quite the contrary.”

Karel Hirman, an energy analyst who has been following Transpetrol developments for several years, said that he has always considered the privatisation of Transpetrol a mistake, which was multiplied by the fact that 49 percent of the shares were sold directly to an oil producing company.

“The oil producer is making money on selling its raw material and not on its transportation and logically it has an interest in preferring the transportation of its own raw material at the expense of other oil companies,” Hirman told The Slovak Spectator. “By doing so it puts other oil refineries, which are supplied through that pipeline, at a disadvantage.”

Considering these issues and the related logistical nature of the pipelines in this part of continental central Europe, the pipeline networks are usually owned by the state, said Hirman, who listed the examples of the Czech Republic and Poland.

“Or the owner is a company which at the same time owns refineries that are supplied by these pipelines: the example of Hungary or Austria,” Hirman said. “Similarly, state-owned companies are operators of the Druzhba pipeline in Ukraine and in Russia. This is why I think the state should keep share ownership control over Transpetrol.”

According to Hirman, the ownership status of Transpetrol is also important in the creation and management of obligatory state reserves of oil and oil products.