BURYING your valuables is perhaps, in times of the omnipresent global financial crisis, a good idea, unless you forget where on earth you hid them. Whether this was the case of the man who in the 17th century, during an invasion of Košice, hid a copper casket with 2,920 gold coins, three medals and a 214-cm-long gold chain in the ground, or whether his fate was more tragic, will probably never be known. 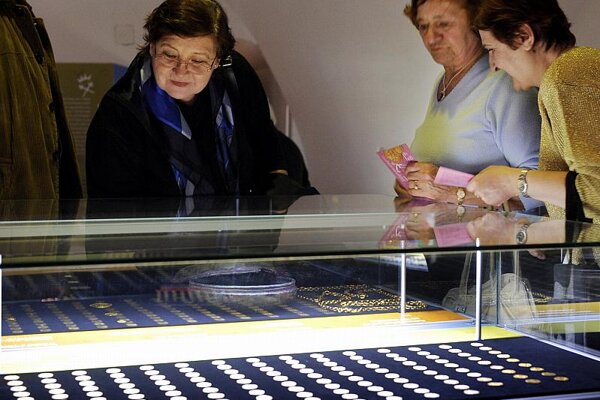 The Golden Treasure of Košice is on display in Bratislava (Source: TASR)
Font size:A-|A+  Comments disabled

BURYING your valuables is perhaps, in times of the omnipresent global financial crisis, a good idea, unless you forget where on earth you hid them. Whether this was the case of the man who in the 17th century, during an invasion of Košice, hid a copper casket with 2,920 gold coins, three medals and a 214-cm-long gold chain in the ground, or whether his fate was more tragic, will probably never be known.

It is certain, however, that some 350 years later, the Eastern Slovak Museum (VSM) is not repeating the mistake and has preferred to make its special collection available even during the overall renovation of its Košice premises rather than “burying” it for a year or two in the National Bank of Slovakia’s safe. As a result, the Golden Treasure of Košice is on show at Bratislava Castle until August; later it will probably tour several other European metropolises.

The invitation to the vernissage carried a comical sentence in the eastern Slovak dialect: “What the heck does this mean? The Golden Treasure of Košice in Bratislava?!” Although it might seem that it was the Košice museum which has lent the treasure, annually seen by around 50,000 visitors, to the Slovak National Museum (SNM) in Bratislava for the next five months, in reality it is quite the opposite.

“The Golden Treasure of Košice is the property of the Slovak Republic, meaning that the VSM has borrowed, and will always be borrowing, the collection from its administrator, the SNM’s Historical Museum,” said Róbert Pollák, director of the VSM.

And yet, the treasure, which was found on August 24, 1935, in Košice’s main street, has never before been presented as a whole in the Slovak capital.

“When looking for a place to store the treasure during the renovation of our historical building, we thought it would be great to enable even more people than normal to see the exhibition, and we naturally opted for Bratislava Castle,” Pollák told The Slovak Spectator. “But this will probably not be its last stop before returning to Košice. Though nothing is sure yet, we are thinking about sending the treasure to Prague, Brussels, and Marseilles, which will be our fellow European Capital of Culture in 2013, and once it is in France, maybe also to Paris.”

A symbol of local identity

Titled “The Golden Treasure of Košice at Bratislava Castle”, the exhibition opened on March 19 and its vernissage was accompanied by a screening of a documentary by historian Pavel Dvořák as well as by a presentation of a new book on the treasure by Marek Budaj, a numismatist and the curator of the display.

Budaj observed that the precious relics are one of the most important archaeological finds in Europe.

“Among the most precious are the three medals, especially Ferdinand I’s equestrian medal from 1541, the gold variant of which is a world rarity,” Budaj told The Slovak Spectator and added that both local and foreignvisitors would surely be attracted by such a unique collection.

“We are extremely glad that the treasure did not remain in deposit,” he said.

Jana Hutťanová from the SNM’s Historical Museum marketing department stated that children are welcome at the exhibition, too.

“The Slovak National Museum has always supported learning through playing in its long-term education programme “School at Museum – Science as Fun”, and this exhibition is no exception,” she explained. “This time we have prepared a series of information sheets that provide interesting and useful facts about the journey of the gold coins to the museum.”

Organisers thus obviously agree that making the treasure available also for the public outside its hometown was a good decision. But it seems there are more than a few people looking forward to the day when this “expatriation” will be over.

“On its farewell day, dozens of people wrote in the visitor’s book messages such as ‘Please, bring us back the treasure as soon as possible’ and similar,” VSM’s director Pollák said. “This proves that for the inhabitants of Košice, the collection of gold will always represent not only a historical curiosity, but also a symbol of local identity.”