THE QUESTION of who would occupy Slovakia’s presidential palace for the next five years was not the only one posed during the presidential race in late March and early April. 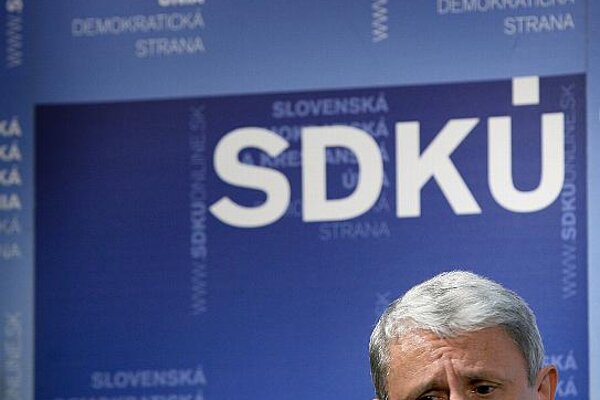 THE QUESTION of who would occupy Slovakia’s presidential palace for the next five years was not the only one posed during the presidential race in late March and early April.

Though Ivan Gašparovič, who was backed by the largest ruling party, Smer, and its junior coalition partner, the Slovak National Party (SNS), won the presidential race, his challenger Iveta Radičová, the joint candidate of the opposition parties, collected 988,808 votes in the second round.

Her strong showing has raised some tough questions for her critics - but also for her own party.

In the aftermath of the election, Prime Minister Robert Fico summoned a special press conference to pan the media for what he called acting against the national interest and what he alleged was its biased coverage of the presidential race in favour of Radičová and at the expense of Gašparovič (see story on page 3).

Fico also suggested that a new opposition power was emerging in Slovakia, namely the Slovak press.
While the prime minister’s criticism of the press is hardly a new strand to his rhetoric, observers suggest that Radičová’s performance may have been a contributing factor.

Political scientists also say that Radičová’s party, the Slovak Democratic and Christian Union (SDKÚ), now has to figure out how best to use her electoral potential.

Three days after the election, in the midst of media speculation about Radičová’s future role in her party, the SDKÚ’s chairman - and former prime minister - Mikuláš Dzurinda announced that he reserves the right to lead the party - as election leader, occupying first place on the party’s electoral list - in the next parliamentary elections.

However, immediately after the first results of the second round of the presidential election had appeared, Dzurinda had said that the SDKÚ would certainly use Radičová’s potential.

Radičová said she would pursue the post of election leader in the SDKÚ primaries, “as far as there is an impulse either from the members or the regions.”

In order to challenge Dzurinda in party primaries Radičová would need the backing of a regional party body or 300 SDKÚ members.

Radičová said she was surprised by Dzurinda’s statement about wanting to lead the party in the next elections.

“I had thought that some kind of conversation would have preceded [the statement],” Radičová said, as quoted by the Sme daily. “It was completely new information to me.”

Explaining his decision, Dzurinda said that he felt the responsibility to reverse developments in Slovakia.

“I do not like the populism and nationalism that have appeared in Slovakia,” Dzurinda said, as quoted by the SITA newswire, adding that he feels responsible for the party which he chairs.
He also said that Radičová will always have complete freedom to promote her opinions through the SDKÚ which, Dzurinda stressed, is not a one-man party.

The SDKÚ plans to hold primaries in June 2009.

On election night on April 4, Fico also commented on Radičová’s future, linking it to the performance of the media.

He said he does not envy Dzurinda as he expects all the media attacks that focused on Gašparovič to now be targeted on Dzurinda, since the press, he said, will want to turn Radičová into the leader of the opposition parties.

Political scientists also suggest that public support is one thing, while party politics is another.
“She has definitely gained very solid political capital in these elections,” political scientist and president of the Institute for Public Affairs (IVO) think tank Grigorij Mesežnikov told The Slovak Spectator. “However, one should not automatically attribute the result and the number of votes she collected to the party that she represents since supporters of the other two opposition parties voted for her as well.”

Public support in presidential elections where there is a concentration of votes between two candidates is one thing, but party politics is another, said Mesežnikov.

“Though party politics is about gaining public support it also is about the ability to organise, lead and strengthen the party; to create alliances with other parties; to secure the effective functioning of the deputies’ caucus and consider balances in the leadership,” Mesežnikov added. “The fact that Radičová gained good political capital will not necessarily be reflected in her position in the party. She is already a deputy chairwoman, which is a significant post.”
According to Mesežnikov, much now depends on the ambitions that Radičová expresses and also the decision the party leadership arrives at.

While Radičová has already suggested that she would like to use her potential in the service of the party, some party leaders have already expressed doubts about whether she is able to. One leading SDKÚ member, former foreign minister Eduard Kukan, has already said that he cannot quite picture Radičová as party chair.

“If any political conflict emerges from this, her political potential will be wasted,” Mesežnikov said.

He expects the party to arrive at some rational solution which would take into consideration the fact that Radičová is currently the most popular politician of the opposition, but at the same time maintain balance within the party. The SDKÚ has its history and its people, while Radičová joined only about three years ago, Mesežnikov noted.

Mesežnikov does not see Radičová as necessarily a unifying element for the opposition. Although, thanks to her, the opposition parties started to cooperate Mesežnikov said he would not call it any sort of unification.

However, political scientist László Öllős said he expects cooperation between the opposition parties to continue after the election, meaning that the parties will tend to meet and coordinate their steps more.

Öllős agreed that a party chairman must also be a decisive and energetic person.

“She has not come across as one so far,” Öllős told The Slovak Spectator. “Being energetic does not mean an inclination to meaningless conflicts but rather the ability and will to discuss issues, which can be done very intelligently.”

According to Öllős, Radičová needs time to figure out her options so that she can make an intelligent decision.