Prime minister lashes out at journalists

PRESIDENTIAL election night brought few surprise to the Slovak political scene. Political analysts, though most through gritted teeth, were forecasting victory for the incumbent, Ivan Gašparovič. But few guessed that on the night itself, just after the preliminary election result showing that Gašparovič would indeed remain president of Slovakia for the next five years had been released, Prime Minister Robert Fico would use the opportunity to deliver a broadside to a group he has long made clear he regards as the enemy: Slovak print journalists. 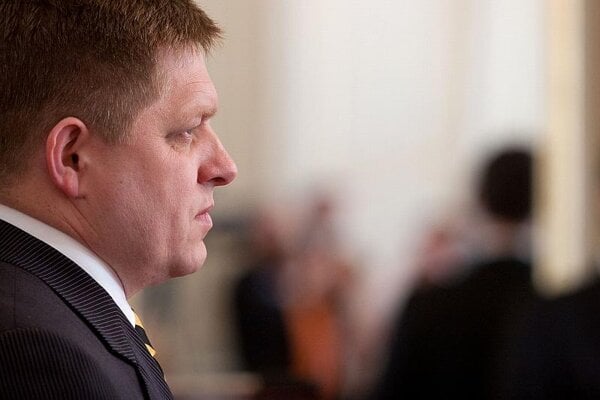 PRESIDENTIAL election night brought few surprise to the Slovak political scene. Political analysts, though most through gritted teeth, were forecasting victory for the incumbent, Ivan Gašparovič. But few guessed that on the night itself, just after the preliminary election result showing that Gašparovič would indeed remain president of Slovakia for the next five years had been released, Prime Minister Robert Fico would use the opportunity to deliver a broadside to a group he has long made clear he regards as the enemy: Slovak print journalists.

The at-times hard-fought contest between Gašparovič and the opposition-backed presidential candidate, Iveta Radičová, was quickly forgotten: after Fico had congratulated Gašparovič on his re-election, he launched an attack on the Slovak media, and the press in particular, for what he called “all the slurs, deceit, and accusations levelled at President Ivan Gašparovič”.

He said it was the media who had lost in the election and promised a special press conference for Monday, April 6, devoted solely to the topic of the Slovak press.

Gašparovič, whose victory owed much to Fico’s explicit support – some of the president’s pre-election billboards showed him and Fico together; others just Fico himself – had also adapted his behaviour and rhetoric towards the media during the campaign.

After winning the most votes in the first round of the election on March 21 he said he was glad “to win this fight with the media”. On election night after the second round on April 4, journalists from the Týždeň weekly and the Nový Čas daily were barred from the hotel in Limbach, a village outside Bratislava, where Gašparovič was awaiting the results with his supporters.

“The reason [for this] is that Týždeň rowdily calumniates Mr President,” Gašparovič’s spokesman Marek Trubač told journalists from Týždeň as they tried to get in. He referred to a caricature of Gašparovič - which depicted him as a small dog dressed in a clown’s costume leashed to a fujara (a Slovak traditional instrument of which the president is fond) - which had appeared on the front cover of Týždeň’s printed edition a couple of weeks earlier.

“I want to thank all those who trusted me. Their votes must silence those who were making up untruthful things and talking down the work of the president, the government and parliament,” Gašparovič said in an address to his supporters after the unofficial results were released.

On April 6, Fico delivered on his promise to hold a press conference, at which he duly picked up where he had left off on election night. The prime minister said the presidential campaign clearly proved that the Slovak press had emerged as a new opposition force. The Slovak press is absolutely non-objective, monochromatic and harms national and state interests, he said, repeating statements he has made before in his premiership.

“The Slovak press has literally appeared to be the pre-election newspapers of the unsuccessful presidential candidate,” he said, advising the owners of Slovak newspapers to found their own political parties and enter the political arena.

Fico said that he thought the press had only searched for negative things to say about Gašparovič, while his challenger, Radičová, was only presented in a positive light.

"This kind of tendentiousness and bias was only seen in the Slovak press before 1989," he said, as quoted by the SITA newswire.

Most of the commercially successful media is indeed critical towards the government, the chairman of the Slovak Syndicate of Journalists, Zuzana Krútka, told the TASR newswire.

“However, if the representatives of the executive have a problem with insufficient plurality in the media, there are measures [they can take] to support it,” she said. “Other European countries take measures to enable publication of media with opinions oriented differently from those of the commercially successful ones.”

Fico said that nowhere else in Europe had the press acted so much against the government as in Slovakia.

When asked why he thought this was so, he told the assembled journalists: "Because you think that you can change Slovakia and you are the only ones that can decide about the political efforts of people, but you are wrong, because the press has absolutely no influence in Slovakia."

According to Fico, the Slovak press follows three tendencies. Firstly, it is an opposition force that is using all the consequences of the global economic downturn to attack the government.

Secondly, he said, the press creates an undemocratic environment in the country, dividing Slovaks into “decent, just and educated” supporters of Iveta Radičová and “uneducated, indecent and unjust” supporters of Ivan Gašparovič.

The third, new, tendency of the press, according to Fico, is that in its fight against the government it has gone so far as to harm the interests of the state and the nation.

He referred to an interview published in the Hospodárske Noviny financial daily on March 26 with László Toroczkai, the leader of the Hungarian 64 Counties Movement, which advocates revision of the post-World War I Treaty of Trianon that defined the current borders of Hungary (including its northern border with present-day Slovakia). Shortly after its publication Fico had described the interview as "unbelieveable", the Sme dailyreported.

At the April 6 press conference he also attacked the journalists of the Pravda daily saying that its owners "love the Hungarian extremists".

“If this third, dangerous tendency to give space to Hungarian extremism continues in the Slovak press, the Security Council will have to deal with it,” Fico said.

Fico was asked to clarify what he meant by this comment but declined to do so.

The Slovak Syndicate of Journalists later issued a statement describing any Security Council interference in the media as 'unacceptable'.

Political analyst László Öllős said he thought Fico had attacked the media immediately after the presidential election mostly because of Radičová’s relatively good showing – she received the votes of almost a million people - which far exceeded the support which the three opposition parties that backed her have polled in recent opinion surveys.

"Another reason is that the [parliamentary] elections are very close, just around the corner, and in this way Fico wanted to blunt the influence of the media in society, by calling them anti-national and so on," Öllős told The Slovak Spectator, adding that he did not think the Prime Minister had been very successful in doing so.

Grigorij Mesežnikov, a political analyst, agreed that Fico and the people around him have been made nervous by the election results, which showed that the opposition parties are able to mobilise many more votes than opinion polls have suggested for some time, and that their ability to mobilise voters is much greater than the ruling coalition expected.

“Fico needs enemies, he always needs to define himself against somebody, and the media have always been a problem for him because he saw them as the representatives of opposition,” Mesežnikov told The Slovak Spectator. “But this idea that he has no opposition but the media has now been proved wrong by the presidential election.”