BEFORE the Easter weekend, several events were organised all over Slovakia to highlight and teach various Slavonic traditions and to demonstrate crafting skills. 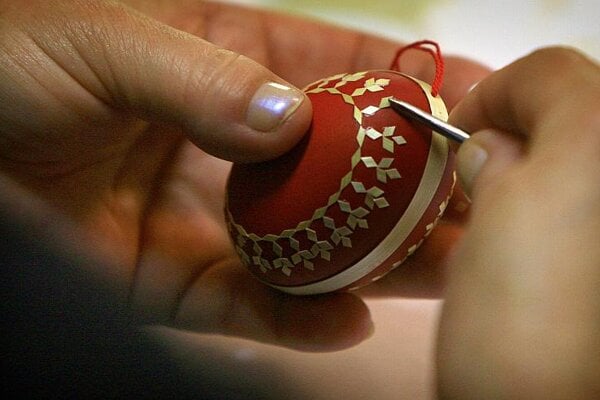 BEFORE the Easter weekend, several events were organised all over Slovakia to highlight and teach various Slavonic traditions and to demonstrate crafting skills.

In the Petržalka district of Bratislava, the first “Easter Farmer’s Backyard” exhibition was opened, with several politicians and local officials present. The purpose was to remind people of old traditions by presenting traditional folk products and crafts. It took place at the horse racing stadium.

People who wanted to learn some of the old techniques of egg decorating could watch amateur craftswomen at ÚĽUV (The Centre of Folk Art Production) like Ľuba Viazanková or Božena Adamicová, who know how to make beautiful Easter creations. There is a long tradition of decorating eggs in Slovakia, the ČTK newswire wrote.

There are several traditional ways of decorating eggs, from sticking straw to them and then dying them, to wrapping them in wire, as was demonstrated by Lívia Podobná. Most often, the “empty” eggs have been drained of both the yolk and egg white. Before Easter, visitors flood to ÚĽUV to see and learn the old techniques. Slovak visitors do not prefer any one technique, but foreign visitors appear to like best the eggs decorated with wax and straw, according to ČTK.

Ethnologist Eva Kollárová from the Slovak Agricultural Museum in Nitra said the tradition of Easter in Slovakia has been slowly losing its ancient character and habits and is being replaced by Anglo-Saxon and German rituals, the TASR newswire wrote. The museum prepared an event for children to show them old Slavonic habits and to teach them various traditional terms.

According to Kollárová, what is very interesting is the way in which ancient pagan rituals melded with newer, Christian ones. In western Slovakia, men used to whip women with a korbáč, a whip made of birch or other canes, while pouring water on women or girls or throwing them into water was quite unknown in the western region. In central and eastern Slovakia, however, the traditions were the opposite.

Slovak regions also differed in Easter meals and menus. Men who left to go whipping and ‘watering’ women early in the morning got raw eggs as a reward which were later fried and eaten. The later tradition of Easter bunnies came from Germany which had its own goddess of spring, Ostara, and the hares were symbols of fertility. Today’s chocolate bunnies, however, are more the result of commercialisation.