THE ALMOST 400-year-old corpse of aristocrat Žofia Bosniaková which had been on display in a church in Teplička nad Váhom in Žilina region was set alight by Ľuboš R., a 31-year-old man, on April 1 and was completely consumed by fire, the TASR newswire reported. 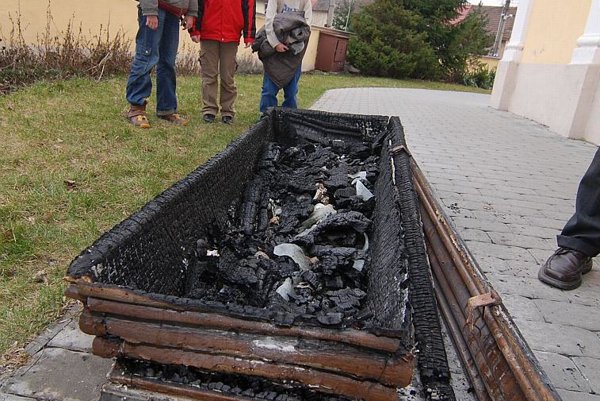 THE ALMOST 400-year-old corpse of aristocrat Žofia Bosniaková which had been on display in a church in Teplička nad Váhom in Žilina region was set alight by Ľuboš R., a 31-year-old man, on April 1 and was completely consumed by fire, the TASR newswire reported.

The police arrested the culprit at the scene of the crime as he watched the coffin burn. Although he confessed to starting the fire, his motive is still unknown. The man will face charges that could lead to a jail sentence of 1 to 5 years, the spokeswoman for the Žilina police, Jana Balogová, told TASR. The arsonist was at first detained but was then sent to a psychiatric institution for examination. He allegedly has schizophrenia.

Žofia Bosniaková, the wife of Hungarian palatine František Vesselényi, lived in Teplička nad Váhom and at nearby Strečno Castle, where she died in 1644 at the age of 35. During her life, Bosniaková was well-known for the charity she gave to the poor and sick and for other good deeds. Her body, which was almost perfectly preserved despite the fact that it had not been embalmed, was found 45 years after her death in the castle crypt, TASR wrote.

The crypt in the Lorraine chapel with the corpse of Žofia Bosniaková was accessible for visitors after making a written advance request or after having registered in the visitors’ book. The arsonist signed the visitors’ book, got the key to the crypt from a nearby confectionery store, brought the corpse outside, set it on fire and watched it burn while allegedly laughing wildly. He said he had seen Žofia in a dream as a witch or a vampire and, as he had seen in a film that evil beings can be destroyed by fire, he tried to do so.

An expert commission will evaluate the state of the remains and propose what to do next. The Žilina diocese will then decide on the fate of the burnt remains. This year Teplička locals and the diocese were preparing to celebrate the 400th anniversary of her birth on June 2 and the Bishop of Žilina Tomáš Galis wanted to mark the year in her honour.

Bishop Adam Ladislav Erdödy arranged the licence for making her remains publicly accessible in 1728. Earl Löwenburg, owner of Strečno castle, permitted the chapel to be built and her remains were moved to the crypt in 1729. Nitra Bishop and now Cardinal Ján Chryzostom Korec named a commission in 1997 that is gathering necessary evidence for Žofia’s beatification but this is a long-term process, SITA wrote.