Speaking French is not an unattainable dream

“FRENCH and something in addition,” runs the motto of the Alliance Française de Košice (AFK), one of the four Slovak branches of the well-known worldwide network. Right now it is exactly the “something in addition” that can be enjoyed in the cinemas, museums and concert halls of the easternmetropolis, for they are hosting the 10th jubilee edition of French Culture Days. 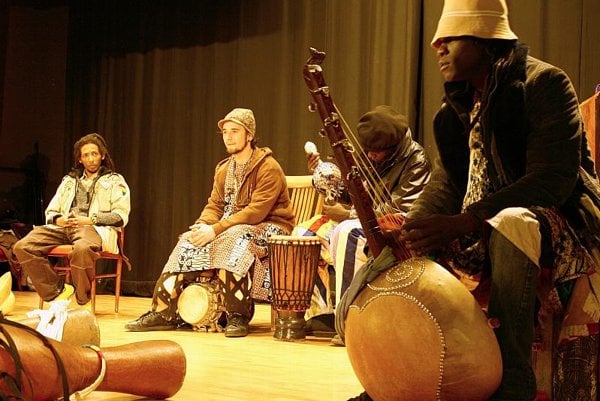 “FRENCH and something in addition,” runs the motto of the Alliance Française de Košice (AFK), one of the four Slovak branches of the well-known worldwide network. Right now it is exactly the “something in addition” that can be enjoyed in the cinemas, museums and concert halls of the eastern
metropolis, for they are hosting the 10th jubilee edition of French Culture Days.

The festival opening took place on March 23 and was attended by Henry Cuny, the French ambassador to Slovakia.

“Košice French Culture Days represent a perfect illustration of the successful fusion of two different cultural approaches, Slovak and French,” Cuny told The Slovak Spectator. “Moreover, their uniqueness lies in the fact that they span numerous domains, always with an emphasis on the language.”

Indeed, with the events being so varied, sometimes it seems that the only unifying element is French. They include an exhibition of special acoustical glass sheets producing sound which was designed by Denys Vinzant for Lyon’s National Opera, a concert of French-Senegalese band Black Thiossane, a theatre competition for students of French bilingual secondary schools, a lecture on chocolate (with tasting) by Xavier Lavry, a display by photographer Marta Jonville, and several French film screenings. A closing concert by singer Grégory Veux will be held on April 17.

As AFK’s president Roman Gajdoš stated, the choices were aimed not only at a variety of genres, but also at bringing the city of Košice something “new and unseen”, like the acoustical glass or African music.

“Apart from that, we also start by focusing on ‘the Francophone’ rather than ‘the French’, which means that we deliberately invite artists coming from French-speaking countries other than France,”
Gajdoš told The Slovak Spectator. “This time, for example, Senegal, Guinea, Switzerland and Belgium are represented at the festival.”

The AFK president, who is also a translator and interpreter of French, added that French Culture Days were extremely significant also for the aforementioned linguistic reasons.

“I often hear people saying how beautiful and melodic French is, but at the same time, almost everybody believes it is too difficult for them, and the language is therefore considered a kind of unattainable dream reserved for the lucky few,” remarked Gajdoš.

“This is what we are trying to change through our cultural activities. Slovaks should understand that French is not only the tongue of Moliere, but that it also serves for everyday communication.”

After Košice’s successful candidacy for the European Capital of Culture (ECOC), which it will share with the city of Marseilles in 2013, and thanks to the presence of several French companies in the region, the efforts of the AFK to find support for the French Culture Days and the language have become somewhat easier.

“It was, actually, thanks to a generous contribution from both the Košice ECOC team and French businesses that we could put together such a rich programme,” Gajdoš said.

Grégoire Brault, AFK’s director and attaché of the French Embassy in Slovakia for linguistic cooperation, agreed with his colleague that cooperation with the private sector was crucial for strengthening the links between the two countries. On the other hand, he expressed his belief that the French community in Košice is still comparatively small.

“At present, there are only approximately 30 French people living here, which is not many for a second city,” he told The Slovak Spectator. “Nevertheless, Košice surely does not lack French culture supporters. After all, so far around 700 people have attended the events that we have prepared for this year and the festival is not over yet.”

To draw even more attendees in the future, the AFK plans to organise a higher number of events year-round, so that people feel the real presence of French (and Francophone) culture in the town.

“This approach should ensure that the locals know about the AFK’s existence and not only remember it once a year,” he concluded.

The following parts of the 2009 French Culture Days programme are still available: the exhibition “D’ores et d’espace” by Denys Vinzant; the exhibition “Commenting, Editing” by Marta Jonville; and the concert by Grégory Veux. For more information on dates, times and venues, visit www.kosice13.sk.