THE DEFENCE Ministry has signed a contract for €2.2 million (Sk67 million) with the DUG firm of Rimavská Sobota in eastern Slovakia for guarding empty military buildings. According to police, the son of one of the owners of the company is a senior member of an organised crime gang operating in Bratislava, known as the Piťovci. 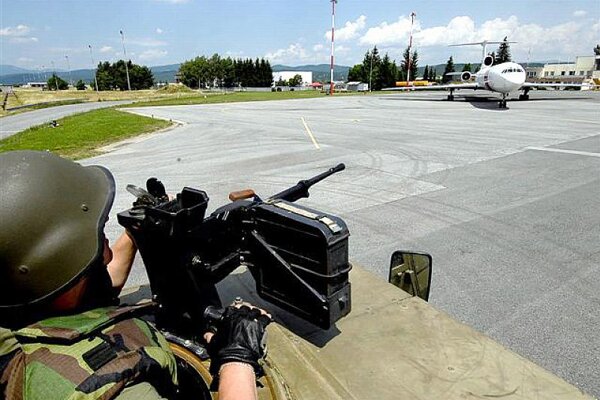 THE DEFENCE Ministry has signed a contract for €2.2 million (Sk67 million) with the DUG firm of Rimavská Sobota in eastern Slovakia for guarding empty military buildings. According to police, the son of one of the owners of the company is a senior member of an organised crime gang operating in Bratislava, known as the Piťovci.

DUG’s bid for the contract was the only one the ministry considered. The company did not meet the original conditions of the tender, which required applicants to have a security clearance certificate from the National Security Bureau (NBÚ).

This key requirement was later dropped by Juraj Hrehorčák, the head of the Acquisitions and Investments Bureau at the ministry, which is responsible for public procurement. Hrehorčák previously served under Interior Minister Robert Kaliňák, where he also had responsibility for procurement.

According to Bratislava court spokesman Pavol Adamčiak, Abrahám was accused of attacking the plaintiff in the Hysteria Pub in Bratislava in 2004 and demanding that he pay Sk20,000 (€664) or forfeit his car. This was allegedly followed by threats of violence and more monetary demands through 2005.

“I was set free not only because the incident never happened, but also because, as I remember, the judge said the police had acted inappropriately,” said Abrahám when contacted by The Slovak Spectator.

“I don’t believe them,” Abrahám said. Although he admitted to knowing gang leader Piťo, he said the police were coming to the wrong conclusions due to the fact that he drove a Mercedes G jeep, the model favoured by the gang. “I ride four-wheelers, I represent Slovakia,” he said. “It’s not an easy job.”

According to Ján Mojžiš, the former director of the NBÚ, DUG could have had problems gaining a security clearance certificate. “The family connection you described could have been judged as a security risk, although this would not have been automatic.”

According to the Act on the Protection of Classified Information, applicants for security clearances may be judged to be a security risk if there is “the existence of business, ownership or financial ties with individuals from the sphere of organised crime.”

NBÚ spokeswoman Blažena Zimanová would not comment on whether DUG would be likely to receive a clearance if it applied, but said that each application was judged individually to see if it met the terms of the law.

“I don’t help him at all,” said Abrahám Jr. when asked if he played any role in his father’s security company. “That’s why it’s pointless to connect him with my name.”

DUG managing director Dušan Urban expressed surprise when confronted with the information about his business partner’s son. “That’s been confirmed? I don’t know, this really takes me aback.”

The Defence Ministry claimed that the requirement for the security clearance had been dropped in order to save money and make the tender more transparent. “Secure sites are much more expensive to guard, and we can’t afford that,” said ministry spokesman Vladimír Gemela. “We would not be making the best use of taxpayers’ money.”

However, a security company owner who has done work for the Defence Ministry in the past said it was unusual for such a tender not to require a security clearance. “In the past the rule was that firms doing security work for the interior and defence ministries needed a certificate,” he said. “It was not at all discriminatory; it was just there to ensure that such firms were not connected to organised crime.”

DUG has recently started to perform well in public procurement tenders. In previous years it won only a few contracts worth several million crowns each, but last year it landed a Sk91 million deal (about €3 million) to provide security for the Bratislava public transport company (DPB). It also won a preliminary Defence Ministry contract to guard the same buildings it is securing now, worth Sk3.1 million. That was followed by the current €2.2 million deal.

According to Slovak law, the army must ensure that even empty buildings are guarded. “The administrator of the property has a legal responsibility to ensure that it does not suffer damage, loss, vandalism or encroachment,” Gemela said.

The army pays the salaries of some 16,000 soldiers, but the ministry claimed it was still cheaper to hire private security firms to look after empty buildings. “Professional soldiers would make very expensive guards,” said Gemela, without offering a price comparison.

The ministry spokesman also objected to questions regarding the choice of the company and the decision to change a key condition of the tender that allowed DUG to win. “You are casting doubt on the entire process, from the objective demands of the contract to the need to save money at the ministry, the calling of the tender and its evaluation. Most of the questions you sent us can be regarded as captious.”

Gemela said it was impossible to say how much of the €2.2 million DUG would eventually take home. If the ministry manages to sell any of the buildings, it will cease to pay for their security. “We want to sell them as quickly as possible,” he said.