THE DRUMBEAT of bad news about Slovakia’s economy continues: industrial production here plunged in February by much more than market watchers and businesses had expected, posting a 28 percent year-on-year drop, according to data released by the Slovak Statistics Office. 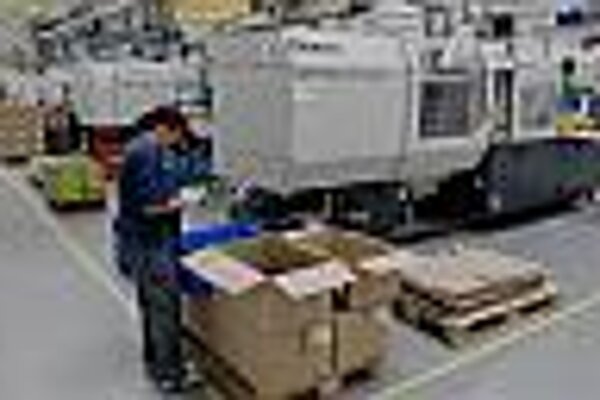 THE DRUMBEAT of bad news about Slovakia’s economy continues: industrial production here plunged in February by much more than market watchers and businesses had expected, posting a 28 percent year-on-year drop, according to data released by the Slovak Statistics Office.

Market watchers also suggest that industry’s performance in February only underpins what the central bank already predicted earlier this month: that the country’s economy will slide into recession this year, for the first time since independence in 1993.

Many had hoped that after a 30.9 percent dip in January, which was attributed to the two-week cut in gas supplies from Russia via Ukraine, industry would at least try to get back on its feet – but paralysed foreign demand continued to drag the numbers down.

Industrial production had been forecast to fall in February – but not by nearly as much as it did. A significantly better result, a fall of about 15 percent year-on-year, had been expected, senior analyst with ING Bank Eduard Hagara told The Slovak Spectator.

“However, industrial production in February posted a similar drop as in January, which implies that in January too, the main factor was low foreign demand and that the limited gas supplies played only a peripheral role in developments,” Hagara said.

The drop in production affected all industrial branches, with the exception of the manufacture of coke and refined petroleum products, which grew 1.9 percent year-on-year, said senior analyst with VÚB Bank Martin Lenko.

“The production of electrical appliances suffered the harshest blow [down by 51.9 percent],” ČSOB Bank analyst Silvia Čechovičová told The Slovak Spectator. “Then came other, mainly export-oriented, sectors such as the production of automobiles, machines and metal products.”

The production of vehicles dropped by 44.4 percent, and clothing, leather and textile manufacturing posted a fall of 36.2 percent, according to the Slovak Statistics Office data. The production of chemicals, rubber and plastic products or metal fabrications also fell by more than 20 percent; the manufacture of wood and paper products was down 15.4 percent year-on-year.

Reasons are the same

“The reasons in fact remain the same: the absence of demand for our products abroad due to recession in other economies,” Čechovičová told The Slovak Spectator. “The Slovak economy is being affected by the global recession as a consequence of the high share of industry, in particular the automotive industry, in GDP.”

At the same time statistics show that these negative developments are forcing firms to reduce their numbers of employees, Čechovičová added.

“The average number of people employed in industry dropped in February by 10 percent year-on-year,” Čechovičová said. “Apart from that, wages are also being cut.”

The statistics authority reported a drop in the number of employees in the wholesale sector by 19.8 percent and in restaurants by 14.5 percent. The sale and repair of motor vehicles reported an 8.6 percent drop, while employment in accommodation services sunk by 4.6 percent. By contrast, the number of people employed in the construction sector rose by 6.1 percent.

The year-on-year growth of wages in industry stood at only 1.1 percent, Čechovičová noted.

Observers are not expecting much improvement in the March figures

Despite the fact that nine of the 13 sectors which are included within the industrial production figures recorded a shallower fall in February compared to January, growth remains very weak and the outlook for future production has recorded only a very small improvement, Lenko said.

“In this sense we do not expect March to have brought any sharp change and industrial production will most probably post a drop of around 23 percent year-on-year,” Lenko said.

A further drop in orders of more than 38 percent in January shows that even during the upcoming months the situation is unlikely to change, according to Čechovičová.

Hagara does not expect industry to be back on its feet for several more months either, since there is no notable increase in foreign demand on the horizon. According to Hagara, foreign demand might start to stabilise at the end of the first half of 2009 or during the second half of this year.

“Since Slovak industry is significantly dependent on foreign demand, industrial production might stabilise in the second half of the year,” Hagara told The Slovak Spectator.

In revised GDP figures, released on April 7, the central bank said that Slovakia’s economy would contract by 2.4 percent in 2009. Its previous estimate had projected growth of 2.1 percent. The bank attributes its 4.5 percentage point revision entirely to the global economic downturn and says Slovakia’s economy should resume growing in 2010, when GDP is forecast to increase by 2 percent, with growth accelerating to 3.2 percent in 2011.

“The fall in industrial production, and in construction by 11 percent, along with the previously published drop in retail sales and the weak foreign trade performance only confirms our expectation that the Slovak economy will sink into recession,” said Čechovičová.

Among the greatest threats to Slovakia’s GDP this year are the continuing fall in foreign demand, which could lead to growing unemployment, and a drop in domestic demand, said Lenko.

“The greatest risk is a deeper and longer-lasting recession in the eurozone, the main trading partner of Slovakia,” Hagara told The Slovak Spectator. “Lower demand in the eurozone would mean larger problems for exporters which, through further layoffs and lower salaries, would be reflected in lower household consumption.”

Foreign demand is the key

Foreign demand is key to the growth of Slovakia’s economy and measures taken by the government can only partially ease the impact of the global crisis, Hagara said.

As for the car-scrapping bonus which the government of Robert Fico introduced in Slovakia, Lenko does not think that it will be significantly reflected in the performance of the country’s economy.

“Most automotive production is balanced here and so production can be revived mainly by the revival of demand abroad, for example in Germany, or perhaps with the help of the German car-scrapping bonus,” Lenko said.

The Fico government initially earmarked more than €30 million to scrap old cars and discount new ones; on April 1, another €22.1 million was assigned for the purpose, allowing buyers to claim a discount of up to €2,000 per car. Cars eligible for the bonus must have been in use for at least 10 years and have been registered on the territory of Slovakia before December 31, 2008. The price limit for new cars which can be purchased under the scheme has remained at €25,000.

To a certain degree the car-scrapping bonuses which have also been introduced in western European countries might increase demand for mid-range cars and might help the Slovak car industry, Čechovičová concluded.