Car-scrapping frenzy is over for now

THE SECOND wave of the popular car-scrapping bonus is over with no third wave in sight. It took Slovaks only five working days to burn through the €22.1 million which the government of Prime Minister Robert Fico had allocated in the second wave to scrap old cars and subsidise the purchase of new ones. At 17:06 on April 14 the qualification of old cars for the scrapping bonus was closed after the 22,100th vehicle had been accepted for processing at an authorised scrapping yard. 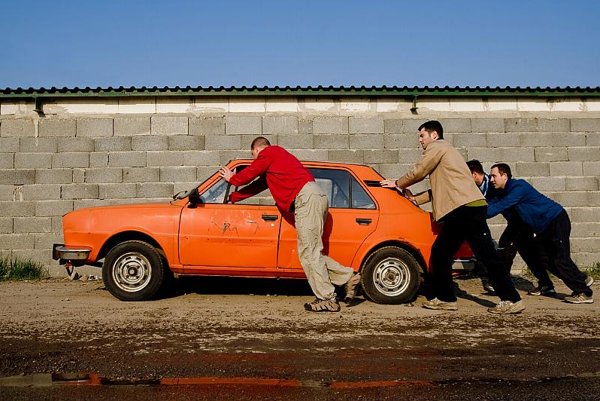 THE SECOND wave of the popular car-scrapping bonus is over with no third wave in sight. It took Slovaks only five working days to burn through the €22.1 million which the government of Prime Minister Robert Fico had allocated in the second wave to scrap old cars and subsidise the purchase of new ones. At 17:06 on April 14 the qualification of old cars for the scrapping bonus was closed after the 22,100th vehicle had been accepted for processing at an authorised scrapping yard.

During the two waves of the bonus programme, a measure adopted to revive the local auto industry and to renew the obsolete domestic fleet of passenger cars, Slovaks pulled, pushed or drove a total of over 44,000 cars older than 10 years to scrapping yards to receive a government-subsidised bonus of up to €2,000 to buy a new car with a purchase price up to €25,000.

While the car-scrapping bonus has been hugely popular among the general public, analysts and economists are less enthusiastic and more restrained when speaking about its value. Finance Minister Ján Počiatek considers the impact on the state budget as neutral, the Slovak Automotive Industry Association (ZAP) hopes that the measure will revitalise the domestic car industry, and some analysts perceive it as an un-systemic measure taken to the detriment of other branches of industry while encouraging people to get indebted.

“We have welcomed this measure,” Mária Nováková of the Automotive Industry Association (ZAP) told The Slovak Spectator. “Even more when we take into consideration the fact that Slovakia is one of the biggest car makers in the world when calculated per 1,000 citizens. Besides this, the European Union manufactures 40 percent of all passenger cars produced around the world.”

When speaking about the scrapping bonus in Germany on March 23, Prime Minister Robert Fico called it a solidarity measure. After a meeting with the prime minister of Lower Saxony, Christian Wulf, he stated that the scrapping subsidy brings no principal benefit to the Slovak economy. “However, the more EU countries which join in this scheme, the bigger effect the measure will have for the whole European car industry,” said Fico, as quoted by the SITA newswire.

According to the TASR newswire, 12 EU member states have already implemented some form of the car-scrapping bonus and the neighbouring Czech Republic is also launching a scheme.

Nováková of ZAP thinks that Slovakia is not a separate market from either the view of production or the sale of cars.

“So, when countries with an automotive market have recognised this step as a step helping the economy, Slovakia has also joined,” said Nováková. “We think that this has helped Slovakia’s economy not only from the viewpoint that cars are produced here but also from the point of view of subcontractors supplying not only Slovak, but also Europe-wide, carmakers.”

Apart from the manufacturing sector, the car-scrapping bonus has brought positive effects also to the sphere of services and maintenance, which employs 20,000 persons in Slovakia, according to Nováková.

“Now, in spite of the huge interest, we need some time in order for things to get settled,” she said. “We expect that the car-scrapping bonus will bring effects every month as during the one month 44,000 new cars were not ready for purchase by those wanting to buy a car using the scrapping bonus.”

Richard Ďurana, the director of the Institute of Economic and Social Studies (INESS), an economic think tank, criticised the car-scrapping bonus as an un-systemic measure which cannot help the ailing Slovak car industry but, on the contrary, will harm Slovakia’s economy as a whole.

“It is surely not only the automotive industry which is hit by the crisis,” said Ďurana. “The government should help the entire business environment in Slovakia by reduction of all kinds of taxes including payroll and income taxes and by reduction of the red tape while doing business.”
He also does not agree with the idea of solidarity.

“Slovakia showed solidarity towards the European automotive industry more than enough, proven by more than €200 million in the form of investment stimuli for foreign carmakers in Slovakia,” said Ďurana in an earlier interview with The Slovak Spectator. “Thus the argument of solidarity is not in order.”

“Money, which thanks to this stimulus was used to purchase cars, will not only be missing in other sectors of economy, but in these sectors the demand for goods and services will decrease. Thus, there will be less money to be spent on insulation of old buildings, housing, electronics and other goods,” said Ďurana.

The Slovak government launched the scrapping scheme on March 9 to assist the ailing car industry in Slovakia, which is home to three large car assembly plants run by Kia, Volkswagen and PSA Peugeot Citroën and a number of producers of car components. Another goal was to ‘rejuvenate’ Slovakia’s obsolete passenger car fleet.

While the government first allocated €33.2 million, expecting that it would take months for auto owners to ‘use it up’, the first scrapping wave was over already on March 25. During this period of less than three weeks, Slovaks brought a total of 22,100 cars to scrapping yards, with Škoda models (63.4 percent) and cars more than 20 years old dominating. According to Nováková, the age structure of cars delivered for scrapping in the second wave was similar.

The maximum scrapping bonus was the same in both the waves, but in the second wave the subsidy from the state was not so generous.

In the second wave Slovaks were eligible for a car-scrapping bonus of up to €2,000 if they replaced their old car with a new one. The state contributed up to €1,000, provided the new car seller discounted the normal price of the car by at least €1,000. The government reduced its contribution by €500 in this second wave as it had offered a subsidy of up to €1,500 per vehicle in the first wave.

The main qualifying characteristics of cars eligible for the bonus were the same for both waves: they had to have been in use for at least 10 years and been registered in Slovakia before December 31, 2008.

No more scrapping bonus for now

The government is not currently pondering a third car-scrapping bonus wave.

Nováková agrees that old cars at the scrapping yards first must be processed.

“The annual scrapping capacity in Slovakia is 120,000 cars,” she told The Slovak Spectator. “Last year, they liquidated a total of about 38,000 cars and now they received 44,000 within one month.”

Regarding the second wave, Jahnátek criticised some entities involved in the scrapping scheme. He criticised unjustified introduction of waiting lists and related fees as well as alleged price increases by some car sellers.

The state-subsidised car-scrapping bonus has also inspired sellers of used cars to use this concept to boost their business.

Autocentrum AAA Auto, one of the biggest sellers of used cars in Slovakia, offers its clients its own variant of the car-scrapping bonus.

“Our sales have more than doubled since the start of the year,” Erika Hettešová, the PR coordinator for the company told The Slovak Spectator. “We even had to fill in our stocks by import of cars from the Czech Republic and Hungary. The advantage of our bonus is that our customers can also buy cars via a leasing contract. Moreover, the customers do not need to wait for the car for one or two months, but can take their new cars within some hours.”

Old Škodas also dominated as the type of cars delivered to Autocentrum AAA Auto to get exchanged for newer models.

“The clients most often picked the Škoda Fabia model as their newer car and the leasing contracts were between €4,000 and €6,000,” said Hettešová.

Since this initiative was met with high interest on the part of customers, Autocentrum AAA Auto will continue it.

“We will extend it in all our car centres across Slovakia by about one month,” said Hettešová.

Inspired by the popular car-scrapping bonus, sellers of other goods began to offer their own version of ‘scrapping bonuses’. Buyers in a shop in Trenčín who bring in an old pair of trade-mark sports shoes will get a discount of €10 on a new pair. People bringing old household appliances or mobile phones to electronic appliances retail chains can also enjoy some scrapping bonuses. But as Jahnátek said on April 15, as cited by TASR, the Economy Ministry is not pondering the introduction of a state subsidy for other products, for example, white goods.