NEITHER the departure of Marian Janušek from the post of minister of construction, nor the appointment of his right-hand man, Igor Štefanov, to succeed him has put an end to the turmoil surrounding the controversial multi-million-euro public contract dubbed the bulletin-board tender. 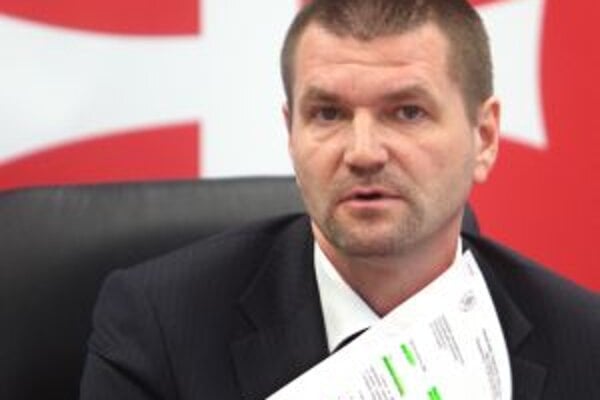 NEITHER the departure of Marian Janušek from the post of minister of construction, nor the appointment of his right-hand man, Igor Štefanov, to succeed him has put an end to the turmoil surrounding the controversial multi-million-euro public contract dubbed the bulletin-board tender.

The tender – which, despite its €120-million price tag, was advertised by Janušek’s Construction and Regional Development Ministry solely through an advertisement on an internal bulletin board in an area of the ministry offices to which members of the public do not normally have access - has now come under the scrutiny of Brussels. The European Commission has launched an investigation of the tender on April 14. The major contract – to oversee the disbursement of European Union funds – was awarded to the sole bidder, a consortium of two companies, Zamedia and Avocat, both of which are said to have close links to Slovak National Party (SNS) leader Ján Slota.

It was Slota’s SNS which originally nominated Janušek, and which has since nominated his replacement, Štefanov.

Štefanov was installed as minister a day after Janušek had been forced to resign over the tender on April 14. However on April 22, the country’s opposition instigated a no-confidence debate in parliament in an attempt to oust Štefanov for what it called his own close involvement in the flawed tender. Prior to his elevation, Štefanov was a key lieutenant of the Januše; his signature appears on many of the key tender documents.

According to Abbott, the European Commission will carefully examine the documents it receives from the Slovak authorities and if the allegations are, in the opinion of the Commission, well-founded, a reasoned opinion will be sent to Slovakia asking it to address the situation.

Dušan Sloboda of the Conservative Institute think tank said that it is a standard procedure that the commission can take whenever doubts about the transparency of tenders arise.

“If the EC finds Slovakia in breach of the directives and the law, the country would be required to also take financial responsibility,” Sloboda told The Slovak Spectator. “What can happen is that the financial resources that were contracted between the ministry and those companies through the bulletin-board tender would not be paid by the EU and the money would have to be paid by Slovakia, from taxpayer funds.”

Where expenditure is made in breach of EU rules, this expenditure may not be declared for payment from the EU budget, Abbott confirmed.

“If the commission does make a payment in good faith and subsequently discovers the project concerned was not in compliance with EU rules, it can recover incorrect reimbursements through financial corrections,” Abbott told The Slovak Spectator. “This means the Slovak authorities would have to pay back money incorrectly received or have the relevant amount deducted from future claims.”

Meanwhile Štefanov said that he would personally meet Commissioner Hübner and explain the tender. Abbott confirmed that the meeting was scheduled to take place just as this issue of The Slovak Spectator was going to print.

“At the request of the new Minister, Igor Štefanov, Regional Policy Commissioner Danuta Hübner has agreed to have the first introductory meeting with him in the margins of the informal meeting of Regional Ministers in Mariánské Lázně [in the Czech Republic] on Thursday (23 April),” Abbott said. “The commissioner will inform the minister on the steps which have been taken by the commission and will urge him to provide a formal reply as soon as possible.

Štefanov’s nomination to his ministerial post by the SNS has attracted wide criticism from Slovakia’s political ethics watchdogs, think-tank observers and also the opposition.

On April 20, at his first press conference, Štefanov repeatedly defended the tender and said that he does not intend to cancel it unless a relevant domestic or international body, meaning the European Commission, provided him with a reason to do so. His comments came despite the fact that an investigation by Slovakia’ Public Procurement Office (ÚVO) has already found that the ministry violated public procurement law in its handling of the tender.

“The new minister is just like the old minister was,” said Sloboda of the Conservative Institute. “There’s no reason to assume that he will proceed differently. Just as Janušek was Slota’s puppet at the ministry, Štefanov is Slota’s right hand. Until now he was a section director at the ministry, heading the Agency for the Support of Regional Development, which is responsible for operational programmes.”

According to Sloboda, even if the face of the ministry is the minister, the bulletin-board tender, just like many other tenders, was prepared in the section for which Štefanov was responsible.

The president of the non-governmental Institute for Public Affairs (IVO), Grigorij Mesežnikov, agrees that the appointment of Štefanov is a problematic step from the point of view of both Smer, the largest party in the ruling coalition, and also the whole coalition, because now Štefanov is the man who will have to negotiate and communicate with the European Union about the tender.

“I do not know whether a similar situation has emerged in any other country before,” Mesežnikov told The Slovak Spectator. “Thus I think it will put the Slovak government at a disadvantage in the eyes of the EU since the government has appointed exactly the person who is responsible for something that cost the previous minister his post.”

Mesežnikov suggested that Fico accepted the nomination because he is dependent on the support of his ruling coalition partners, the SNS and the Movement for a Democratic Slovakia (HZDS).

“The SNS is now aware that it can benefit from its position of power up to the end of the present parliamentary term - because they do not have a 100-percent guarantee that they will again be in a position to decide on state orders after the next elections,” Mesežnikov said.

The boss of the HZDS, Vladimír Mečiar, previously dubbed the tender “cronyism [as big as] Brno or London”. However, his party did not formally object to the appointment of Štefanov to the ministerial post. Mečiar himself was absent from the parliamentary no-confidence vote on Štefanov on April 22, at the end of which 61 of the 140 deputies present voted against the minister and 76 in support (one did not vote and two others abstained). The opposition would have needed 76 votes to have Štefanov removed.

Fico called on Janušek to resign on April 10 after the publication of the results of the ÚVO investigation, which found that the Construction Ministry had erred in its handling of the tender. However, Fico’s call came six months after the so-called bulletin-board scandal was first revealed.

The three most significant shortcomings identified during the audit of the tender at the Construction Ministry were so serious they could have influenced the outcome of the public procurement process, says the ÚVO, which carried out the audit, the SITA newswire quoted the ÚVO as saying on April 21.

The head of the ÚVO, Béla Angyal, described the shortcomings as violations of the Act on Public Procurement, ÚVO spokeswoman Helena Fialová said, responding to Štefanov’s defence of the tender.

A protocol to the ÚVO audit spells out six deficiencies. One of the issues under dispute is the calculation of the expected value of the order. This calculation is pivotal in selecting the appropriate public procurement procedure, Fialová said, as quoted by SITA. The Construction Ministry applied a below-limit procedure, thus avoiding a normal public contest, she added.

Another investigation of the tender, this one by the Supreme Audit Office (NKÚ), is still awaiting publication. The NKÚ says it is currently discussing its findings with the ministry.

Michaela Stankova contributed to the report