FORMER presidential candidate Iveta Radičová, who was supported by the main opposition parliamentary parties in this year’s presidential election, is no longer an MP. She gave up her mandate on April 23 after admitting casting a vote in parliament in the name of a party colleague, Tatiana Rosová, on April 21. Doing so is technically a violation of parliamentary regulations. 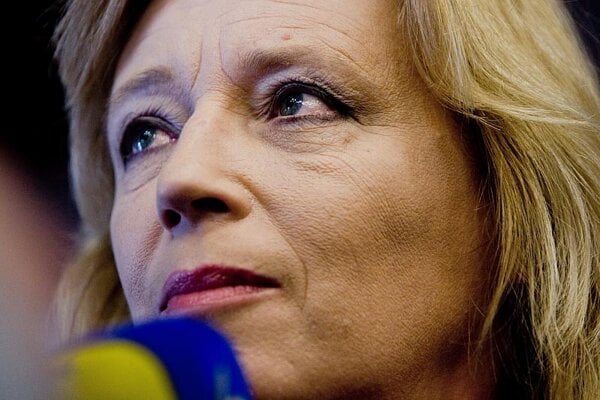 FORMER presidential candidate Iveta Radičová, who was supported by the main opposition parliamentary parties in this year’s presidential election, is no longer an MP. She gave up her mandate on April 23 after admitting casting a vote in parliament in the name of a party colleague, Tatiana Rosová, on April 21. Doing so is technically a violation of parliamentary regulations.

“I made a mistake, a human failure that I feel incredibly sorry for,” Radičová said, as quoted by the TASR newswire. “The only way to clear my name is to give up my deputy’s mandate.” Radičová represented the Slovak Christian and Democratic Union (SDKÚ) in parliament.

Radičová sent a letter to Pavol Paška, the speaker of the Parliament. Giving up her mandate is the only way for her to secure a future in politics, Radičová said, as reported by the TASR newswire. She had already informed her party colleagues about her decision.

The SDKÚ chairman Mikuláš Dzurinda said he was surprised at her decision, as he was not aware she was intending to resign her mandate. He said he accepted her decision, adding that every MP follows his or her conscience. Dzurinda confirmed he was still counting on Radičová in the party.

Radičová remains in the position of deputy chairperson of the SDKÚ and will continue to fulfil her duties in the party. She said she would give more details about her political future next week, TASR wrote.

Political analyst László Öllős agreed that she had no choice but to give up her mandate.

“She made a big mistake and if she wanted to stick with her principles, this was the only solution,” Öllős told The Slovak Spectator. According to the analyst, in the short term she cannot do anything on the political scene. He added that this was a huge loss, and not just for the SDKÚ.

Renáta Zmajkovičová, an MP for the largest party, Smer, raised objections after the vote on April 21, questioning how Rosová, an MP for the opposition SDKÚ, could have voted. Rosová was at the speaker’s desk when she realised she had left the card needed to vote at her seat in the chamber, which is next to Radičová’s. She did not have enough time to return to her seat, as the period in which voting was permitted had been shortened to 11 seconds. Radičová realised this and pushed Rosová’s voting button for her, the Sme daily wrote.

“She [Radičová] was talking about decency, morals, ethics and was offering her clean hands in her presidential campaign,” Zmajkovičová, who is also the head of parliament’s Mandate and Immunity Committee said. “Today, she voted for another MP. Such a fraud did not happen during the last parliament, or during previous ones.”

“All right, if the Immunity Committee issues this sentence, I will resign from my mandate, I’m ready for that: yes, yes, yes,” Radičová said after the incident, as quoted by Sme. Her colleagues from the SDKÚ later asked her to retract the statement, but she refused to do so, Sme wrote.

A session of the Mandate and Immunity Committee to consider her case was scheduled to take place on April 23 at noon. Radičová announced her decision one hour before.

“I consider it clear and moral to take this decision myself and not to accept sanctions,” she said, as quoted by TASR. Zmajkovičová called her move hypocrisy and populism typical of the politics of the SDKÚ, TASR wrote.

According to Öllős, the event temporarily strengthens the position of Mikuláš Dzurinda within the SDKÚ, but the party’s chances for success in the next election are falling.

Political analyst Grigorij Mesežnikov said that the consequences of Radičová’s mistake will mainly be of a personal dimension.

“I don’t think that this weakens the SDKÚ at the moment, but in the long run the SDKÚ could be significantly weakened if Radičová decided to leave politics completely,” Mesežnikov told The Slovak Spectator.