THE FORMER leader of the Hungarian Coalition Party (SMK), Béla Bugár, together with two other MPs in the Slovak Parliament, László Nagy and Gábor Gál, left the party’s parliamentary caucus on April 22, but said that they would not quit the party for now. 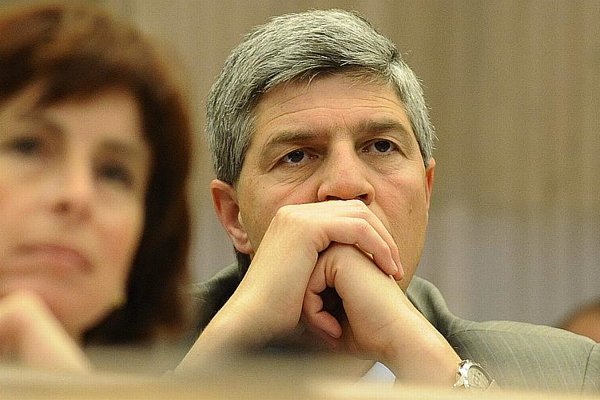 THE FORMER leader of the Hungarian Coalition Party (SMK), Béla Bugár, together with two other MPs in the Slovak Parliament, László Nagy and Gábor Gál, left the party’s parliamentary caucus on April 22, but said that they would not quit the party for now.

“Our decision did not come easily and we were not eager to do this,” Bugár told a press conference, as reported by the SITA newswire. He said their action was a warning to the party leadership and was not directed against the SMK parliamentary caucus or against its chairman Gyula Bárdos.

The threesome’s decision to quit the party’s parliamentary caucus follows the departure of MP Zsolt Simon from the SMK caucus and the party itself on April 20. Simon said that he was forbidden from participating in carrying out the party’s programme, reported the TASR newswire.

The final straw which led the three parliamentarians to leave the caucus was a statement made by SMK leader Pál Csáky on Sunday, April 19 about SMK members who had chosen to quit the party following a district congress in Levice the same weekend, SITA wrote. Bugár said that Csáky had lied when he accused the members of quitting because of their own economic interests and because they had failed to get onto the list of candidates for local elections.

“These people supported us when our government was adopting restrictive measures,” said Bugár. He said that it was not his credo that had changed, but that of the SMK. He said that most of the party’s representatives need self-reflection and added the step should be a warning to the SMK Republican Council, due to meet on May 16, to take measures to change the party’s style of politics, wrote SITA.

The SMK has been known as the most stable political party on the Slovak political scene, as no MP has left it since its foundation in 1998, the Sme daily wrote. But the recent happenings within the SMK show inner instability which has a weakening effect on the party, said political analyst Grigorij Mesežnikov.

“It is clear that the SMK will now take a very long time to deal with the situation inside the party, which will significantly weaken its potential to act on the political scene,” Mesežnikov told The Slovak Spectator. From the viewpoint of the strained relations within SMK, he sees the decision of the three SMK deputies as a rational step, “as they interpret it in the sense that it was no longer possible to stand by Csáky”.

Csáky, who replaced Bugár as the head of the party in March 2007, said the three MPs should return to the party’s parliamentary caucus, TASR reported.

“We’re interested in a discussion,” Csáky said. “We’re afraid of negative reactions to their exit among our voters, as no SMK MP received a mandate to do this.”

Csáky said that he did not expect any more MPs to abandon the party caucus.

“We’ll provide information concerning all details to the press after the presidium session,” he said, as quoted by TASR.

Bugár’s resignation from the caucus could have an impact on party members at lower levels.

“Bugár is a very popular politician in the district of Komárno,” said the mayor of Komárno and SMK district chairman, Tibor Bastrnák, as quoted by TASR. “This was also demonstrated by the latest parliamentary elections in which he received an unmatched high number of preferential votes among all SMK politicians,” Bastrnák continued. The mayor said he has no doubt that Bugár's decision will have an impact on the opinions of members of the party in the region.

According to Mesežnikov, it would be a big loss for SMK if Bugár left the party. However, he is quite sceptical about a new party being founded.

“How would it differ from SMK?” Mesežnikov asked. “Would it be more radical or more moderate or would it offer any new solutions? Absolutely not. This is just a problem inside the party.”

Mesežnikov said that if there would be no significant difference between the SMK and a potential new party around Bugár, it would lower the chances in the parliamentary elections for both.

“As a consequence, none of them might make it to the parliament in the elections, and even if one of them did with, say, 6 percent instead of the present 11 or 12 percent, it would already mean a weakened position,” Mesežnikov told The Slovak Spectator.

In an interview with Sme, Bugár rebuffed the option of establishing new party.