Sokol retires as archbishop of Trnava

POPE Benedict XVI accepted the resignation of Ján Sokol, the archbishop of Trnava, on April 18. Robert Bezák, a priest from the Banská Bystrica diocese, has been chosen to replace him. 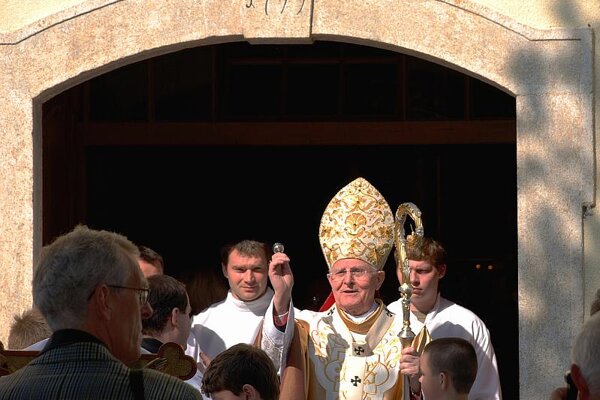 POPE Benedict XVI accepted the resignation of Ján Sokol, the archbishop of Trnava, on April 18. Robert Bezák, a priest from the Banská Bystrica diocese, has been chosen to replace him.

“According to canonical law, every bishop who turns 75 offers his resignation to the Pope; obviously Ján Sokol did so as well and, since the Pope usually accepts these resignations, this decision was expected,” Jozef Kováčik, the spokesman of the Conference of Bishops of Slovakia told The Slovak Spectator.

Sokol requested permission from the Pope to leave office after turning 75 in October 2008.

Sokol was appointed archbishop of the Trnava archdiocese in 1989 by Pope John Paul II. He is known by Slovaks as one of the more controversial personalities in the local Roman Catholic Church, especially because his name appeared on the payroll of the communist-era secret service (ŠtB).

According to documents stored in the Nation's Memory Institute’s archive he worked as an ŠtB agent. Sokol first denied any cooperation with the ŠtB, but later admitted that he communicated with ŠtB officers. He maintains that he was never a collaborator.

“ŠtB officers forced these meetings on me,” Sokol said. “I found them degrading, but when we met I tried to protect the interests of the Church and to distract their attention to irrelevant issues.”

Another controversial aspect of his career has been his attitude towards the Slovak wartime state and its president Jozef Tiso, whom he publicly praised in an interview on the TA3 TV news channel in December 2006.

“I appreciate him very much because we were affluent then,” he said in the interview. “We lacked nothing during the war. I remember that in my childhood we were very poor, but when he was [president] we really had class.”

He later appeared to retreat from his position, with his spokesman, Tibor Hajdu, saying that Sokol had not been defending the negative aspects of the wartime Slovak state.

Bezák, the new archbishop-elect, currently serves as the parish administrator in Radvaň in Banská Bystrica Region. Previously he was prior of the Redemptorists’ order and vice-provincial of the Roman Catholic vice-province of Redemptorists in Slovakia, and teacher of moral theology.

“The Pope has chosen a monk, a young, intelligent man who we believe will enrich the community of bishops in Slovakia,” Kováčik told The Slovak Spectator.