THE SUCCESSFUL ongoing exhibition Shangri-la, India-Nepal-Tibet-Bhutan has several related events, one of which took place between April 16 and 23 in Bratislava. 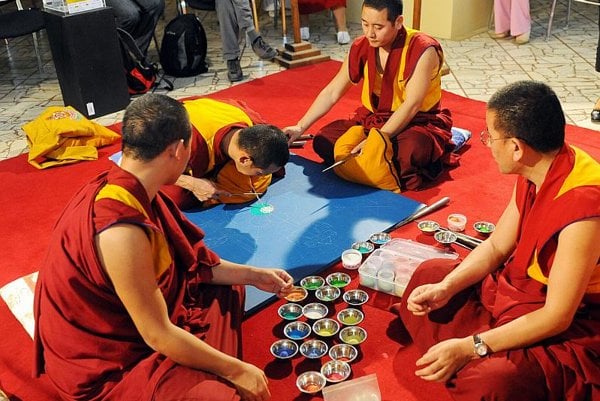 THE SUCCESSFUL ongoing exhibition Shangri-la, India-Nepal-Tibet-Bhutan has several related events, one of which took place between April 16 and 23 in Bratislava.

Eight Tibetan Buddhist monks from the small Lhodak Gaden Dhonnyiling monastery visited the Slovak capital as part of a tour to collect money for the reconstruction of a Buddhist monastery in the Indian province of Ladakh.

Their original monastery was founded in the 17th century in Tibet. After it was destroyed in the 1950s, they started building a new home in the north of India. It took them 40 years to complete it. They managed to raise the money for its operation through trips abroad.

In Bratislava, their programme began on Thursday, with the monks creating a ritual mandala – a kind of temporary picture - made of sand in the Slovak National Museum. They continued with the mandala on Friday, then from 19:00 members of the public could watch a special programme of ritual discussion, music and dance that lasted for two hours.

For Europeans without any previous experience of it, this was a strange if impressive spectacle. Fortunately there were translators and a representative who introduced the whole event and explained the meaning and course of individual performances.

On Saturday, the monks continued their rituals in the Church of the Order of the Poor Clare Sisters, where they sang, played, and performed the religious tchham dance.

On Sunday, there were discussions with the public in the Gamekeeper’s Lodge in Horský Park, from 14:00 onwards. On Tuesday, April 21, the monks continued their programme in the museum: they held another discussion, and created statues made of butter. Their visit culminated on Thursday, when they ritually destroyed the mandala and scattered it into the River Danube.

The Tibetan monks’ visit opened what is almost a marathon of events associated with the exhibition. Every Thursday from April 30 to May 14, and from May 28 to July 2, travellers, musicians and experts on the cultures of India, Tibet, Nepal, and Bhutan will present their works. The highlight will be the Festival Shangri-la which will take place May 18 to 24. For more information, visit www.sangri-la.sk, www.snm.sk, and www.livingstone.cz.