VISITORS to the Podunajské Museum in Komárno can now see an exhibition on tinker craftwork past and present. 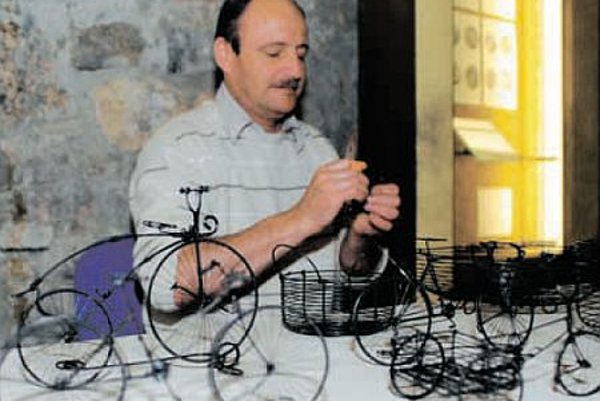 VISITORS to the Podunajské Museum in Komárno can now see an exhibition on tinker craftwork past and present.

Among the items on display are a wide variety of wire figure sculptures, abstract objects, wall reliefs, accessories and jewellery, as well as utility items like bowls, vases, and bins.

The exhibition, over 200 square metres, includes almost 300 exhibits and a rich selection of texts and photos.

It has been organised by Žilina Region, the Považské Museum in Žilina, Nitra Region, and the Podunajské Museum in Komárno, and will be open until June 27.

Until 2006, rare wire items from the collection of the Považské Museum in Žilina were shown in a permanent exhibition of tinker craftwork at Budatín Castle.

However, since the castle is being renovated, the exhibition has had to be closed and the museum is now presenting the collection through short or long-term exhibitions both in Slovakia and abroad.
“We are glad that the museum in Komárno showed an interest in this specific kind of exhibition.
Traditional tinker work is rather typical for the northern regions of Slovakia, especially for the Žilina region, but it is almost unknown in the south of our country,” Katarína Hallonová, the exhibition’s curator and a historian of the Považské Museum in Žilina, said.

The historical part of the exhibition, entitled Tinker Craftwork of the Past, reviews the development of the craft from the simplest products made by wandering craftsmen, through examples of workshop tinker production, to examples of how wire has been used in naive art.

Examples are sculptures and technical objects from the period 1940-1942 from the workshop of tinker masters Jozef Kerak, Vincent Korček, Jozef Kaprálik and Pavol Švábek.

Today’s tinker craft and art are represented by the work of Ladislav Jurovatý Sr., Remígia Biskupská, and Štefan Mlich, who are considered the founders of modern artistic work with wire, and who in the 1960s revived the tinker craft tradition in Slovakia.

The next generation of their disciples, who entered the art scene in the 1990s, is represented by the works of Jaroslav Drotár, Daniela Krajčová, Mária Krajčová, Marta Filová, Andrea Lachová, Ladislav Jurovatý Sr., and Slavomír Pecuch.