THE HUNGARIAN Coalition Party (SMK) has confirmed that 46 party members from the Rimavská Sobota district quit the party on April 27. Another 55 members have suspended their membership in the party. 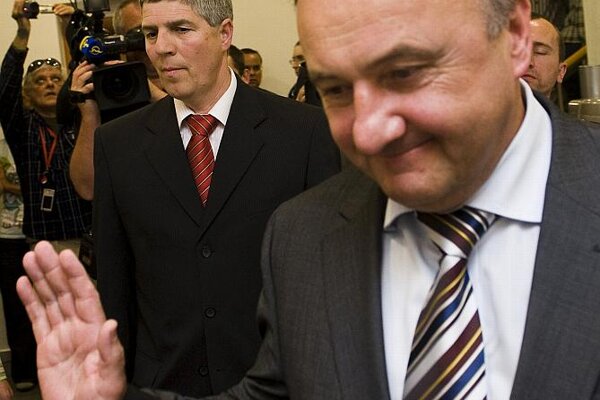 THE HUNGARIAN Coalition Party (SMK) has confirmed that 46 party members from the Rimavská Sobota district quit the party on April 27. Another 55 members have suspended their membership in the party.

As a consequence, eight SMK local associations in the Rimavská Sobota district have quit their activities and five more have suspended them.

“By this step we are expressing our disagreement with the way the party is led,” Július Molnár, the mayor of the village of Tlachy, who was one of those to suspend his membership in the SMK, was quoted as saying by the SITA newswire. “Pál Csáky as chairman has divided and calumniated the party and is continuing to do so.”

Molnár admitted he was open to renewing his membership if the situation in the party improves. According to him, it would be better if the leadership left rather than hundreds or thousands of people, SITA reported.

“Lies and calumniation of those who criticised the leadership of the party has become the working method in the party,” said Ferenc József, another former local party official, as quoted by SITA. He predicted more members of the SMK would quit.

“The SMK leadership and the leaders of the Rimavská Sobota district associations have agreed to a revision of the membership and local associations in this district,” Eva Dunajská, the SMK’s spokesperson, wrote in an official reaction to The Slovak Spectator. “They have also agreed that in July they will call a district conference with the aim of selecting a new chairman and new members of the district chairmanship.”

The first SMK member to leave both the party and the SMK parliamentary caucus was MP Zsolt Simon, on April 14. He explained his decision by saying that Csáky's economic interests were more important within the SMK than the interests of voters. He also said he believed the SMK had been set on a divisive path which was decreasing the party’s popularity.

Simon was soon followed by another three high-profile SMK politicians, MPs Béla Bugár, Gábor Gál, and László Nagy, who announced on April 22 that they were leaving the SMK’s parliamentary grouping, but said they would not quit the party for the moment. The three said their decision to quit the grouping was meant as a warning to the leadership of the party to significantly change its style of management. They said if the SMK’s approach did not change by the party’s next Republican Council executive session, scheduled for May 16, they would also quit the party.

Bugár, Gál and Nagy discussed their concerns about the way the party is being led with its chairman Pál Csáky at a session of the party presidium on April 24, the TASR newswire reported.

Bugár said they insisted that the leadership should change its working methods by the upcoming council session on May 16.

Csáky called the meeting a friendly and open dialogue that will be followed up by continuous efforts aimed at reaching an agreement.

Support for Csáky among lower party structures is now unclear. Three of five districts in eastern Slovakia do not agree with Csáky’s approach, Elemer Jakab, the head of the Michalovce district organisation told the Sme daily.

“98 percent of us in the district are Bugárians,” Jakab told Sme, adding that he himself would quit the party if Bugár does. According to Sme, SMK has over 500 members in the Michalovce district.

The situation within the SMK is serious, according to political analyst Grigorij Mesežnikov, although Bugár and the group around him do not intend to break away. He said it would be risky for them to found a new party on ethnic-Hungarian principles, as after the recent experience cooperation between the SMK and any new party would be impossible and voters would be split, which might mean none of the parties make it into the next parliament, Mesežnikov said.

Although they have not so far demanded that Csáky resign from his post, Mesežnikov said they might sharpen their demands. He was rather sceptical about changing the party’s working methods under the same leadership.

“No party leader changes easily – I cannot imagine Dzurinda, Mečiar or Slota changing at all,” Mesežnikov told The Slovak Spectator. “From this point of view, Csáky is a formed politician who will not change so as to change the circumstances of his activities in the party and the atmosphere he creates around himself.”