TWO businessmen close to Vladimír Mečiar, leader of the ruling coalition Movement for a Democratic Slovakia (HZDS) party, have shown up among the largest donors of the main opposition party in Estonia, Keskerakond. 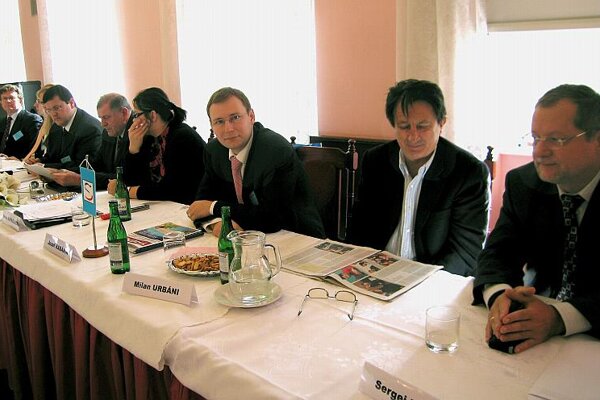 TWO businessmen close to Vladimír Mečiar, leader of the ruling coalition Movement for a Democratic Slovakia (HZDS) party, have shown up among the largest donors of the main opposition party in Estonia, Keskerakond.

According to the official income statement of Keskerakond, otherwise known as the Estonian Centre Party, Slovak citizen Milan Bališ donated €24,000 in February this year, while Peter Ziegler gave €43,000 a month before. The two gifts were the largest the party received, and made up almost 50 percent of its donation income in the first quarter of 2009. Bališ provided security for the VSŽ steel mill under the Mečiar government of the 1990s, and accompanied the former prime minister on trips abroad.

Ziegler was the first to provide Mečiar with an explanation of how he had paid for his sprawling Elektra estate, claiming in 2002 to have lent Mečiar “between 40 and 100 million Slovak crowns".

In an interview for The Slovak Spectator, Bališ said he had given Keskerakond the money “because I want to be popular”. He admitted, however, that his motives were less than altruistic.

“I will be expecting to get something back from the party, of course. I want to do business there, maybe in real estate, and it’s smart to be in good with the people who make decisions.”

In 2005, Bališ and Ziegler participated in a business transaction in which Mečiar’s wife Margita earned almost 60 million crowns, at least on paper.

The transaction provided Mečiar with a financial paper trail and an explanation for how he could have legally received the money to rebuild Elektra.

Paola at the time belonged to Peter Ziegler, and most of the sale price, 48 million crowns, was simply offset against the loan Ziegler allegedly previously gave to Mečiar. After the 2006 elections, which returned the HZDS to the government, the GVM firm that Bališ co-owned gained millions of square metres of land in the High Tatras for about 1 percent of its value from the Slovak Land Fund under HZDS nominee Branislav Bríza. Bališ’ sister Eva Dušičková was also appointed to a well-paying job on the supervisory board of the SPP gas utility.

Bališ said that his gift to the Estonian party had nothing to do with the HZDS, and claimed not to have known about Ziegler’s gift. “We don’t see each other every day, he lives in Spain and Switzerland, I live in Slovakia.”

Peter Ziegler could not be reached for comment, but was quoted in the Estonian press as saying he was a longtime friend of Keskerakond Chairman Edgar Savisaar.

The HZDS and Keskerakond have something else in common besides benefactors – contacts with the ALDE fraction in the European Parliament, the third largest in the legislature. The ALDE is made up of two groups – the liberal ELDR, and the democratic EDP. In 2008 the HZDS gained observer status with the latter faction, while Keskerakond is a member of the first, and thus automatically of the larger ALDE as well. The HZDS aims to become a full member of the EDP, and thus also of the ALDE, at the EDP congress following European Parliament elections in June.

“The HZDS is trying to overcome the stigma of its international isolation,” said Zuzana Wienk of the Fair Play Alliance political watchdog. “It will be interesting to watch the behaviour of the Estonian party within the ALDE, to see if it lobbies harder for the HZDS in future.

Because if people close to the HZDS give money to members of the political faction that the HZDS has been trying for years to enter as a full member, the likelihood that these gifts have ulterior motives increases.”

The HZDS vice-chairman for foreign affairs, Milan Urbáni, denied that Keskerakond was helping the HZDS become a member of the ALDE.

“What kind of nonsense is that?” he asked. “The party you are talking about has nothing to do with the European democrats, it’s a liberal party, so I don’t know why you are connecting them together.”

In an interview with The Slovak Spectator, the general secretary of Keskerakond, Priit Toobal, also denied that the gifts by the Slovak businessmen had anything to do with Keskerakond’s position on the HZDS’ integration ambitions. However, he said that some members of his party had contacts with the HZDS, and did not rule out that the gifts had a political flavour.

“I really hope that the money belongs to them [Bališ and Ziegler], and that they had their own reasons for donating it to us.”

Contacts with the HZDS

TSS: Is there anything that connects your two parties?
PT: Yes.

TSS: And what might that be?
PT: It regards members of my party.

TSS: Why not?
PT: Because they are personal contacts. I can’t tell you why they communicate with each other.

TSS: What kind of contacts are we talking about?
PT: Personal and political.

TSS: Are you helping the HZDS in its efforts to become a member of the ALDE fraction in the European Parliament?
PT: No.

TSS: Do you think the money that Milan Bališ and Peter Ziegler gave you really belonged to them, or was it HZDS money?
PT: I really hope it belonged to them, and that they had their own reasons for giving it to us.

TSS: Milan Bališ told us that he was expecting something in exchange. Has he contacted you with any demands?
PT: I think this is something that Estonian journalists made up.

TSS: Bališ actually told us this in an interview, and we sent his comments to the Estonian media.
PT: I don’t know these men, and so far no one has contacted me.

TSS: Are they likely to be successful in demanding something for their money?
PT: No, I don’t think so. Maybe they just wanted to help the country.