DISCRIMINATION, a product of human fear of someone or something that seems too different to accept, makes life difficult for those who don’t possess the characteristics of the majority. Yet they are bound to live in the society where the beliefs of the majority lead the way. 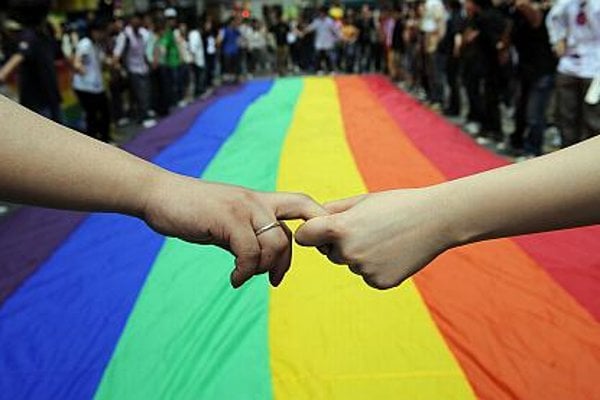 May 17 is the International Day Against Homophobia (Source: TASR)
Font size:A-|A+  Comments disabled

DISCRIMINATION, a product of human fear of someone or something that seems too different to accept, makes life difficult for those who don’t possess the characteristics of the majority. Yet they are bound to live in the society where the beliefs of the majority lead the way.

Discrimination, harassment and violence against lesbian, gay, bisexual and transgender (LGBT) persons are widespread throughout the EU, according to a report about homophobia and discrimination on grounds of sexual orientation and gender identity published by the EU Fundamental Rights Agency (FRA) on March 31, 2009.

“Discrimination affects the lives of LGBT persons in all walks of life, ranging from harassment in schools to discrimination in employment or health care,” the FRA wrote in its press release.

Homophobia worse in the east

According to the FRA, hostility towards non-heterosexuals was more frequently noted in the new member states of the EU, mainly Bulgaria, Romania, Poland, Estonia and Latvia. Slovaks shared their positions at the bottom of the ‘tolerance ranking’. For example, while the EU average of people who expressed support for same-sex marriages was 42 percent, in Slovakia it amounted only to 19 percent, while the list was topped by the Netherlands with 82 percent of respondents supporting same-sex marriages.

“The fear from the unknown is one of the main characteristics of homophobia,” Július Kolenič from the Inakosť (Otherness) initiative, which works to protect the rights of non-heterosexuals and to increase the public awareness of the related issues in Slovakia, told The Slovak Spectator. According to him, statements about the threat to family and marriage that, without any justification, stress one’s personal sexuality have been presented to people for centuries and this is one of the reasons why many are not willing to accept the sexuality of others. Another reason is that homosexuality was a taboo during the 40 years of the communist regime.

“The older generation therefore has a feeling that it’s something new, imported from the west, that has never been here before and therefore they are afraid of it,” Kolenič said.

In comparison to the Netherlands or the Scandinavian countries, Slovakia is much more conservative and influenced by the patriarchal model of society. According to Kolenič, in more open societies where women have an equal status to men, the acceptance of gays and lesbians as full-fledged members of society is much higher.

“We also think that a reason also lies in the overall passiveness of Slovaks, which shows in the insufficient confidence in enforcing one’s own interests,” he said. “In the western countries, since their childhoods, people have been led to expressing themselves as individuals, to be assertive with their interests. This generation of young and self-confident people is, fortunately, growing in Slovakia too now.” According to Kolenič, Slovakia is gradually becoming more non-heterosexual-friendly. What is essential in the process is the dialogue and its form.

“If we let the public look into our ordinary private world, we have a chance to show them that our lives are made of the same joys and sorrows as the lives of the majority in the society,” he said.

Derek Rebro is a PhD candidate in the department of Slovak literature and literary science of Comenius University in Bratislava. Apart from doing research he also teaches creative writing and leads a text seminar in Slavonic literature. He doesn’t feel the need to ‘show off’ with his sexual orientation, but whenever talk turns to this topic, he has no problems admitting he is gay – despite the fact that he feels Slovakia is still heavily loaded with stereotypes. And there are many people from the LGBT community who, unlike Rebro, would like to exercise their right to present themselves freely in public just like heterosexuals do, but they cannot do so without risking verbal attacks – if not worse.

“My life was influenced by the stereotypes. For example, I was hesitating for a long time with my coming out, when I was sorting out my attitudes towards myself and my future life,” he said in an interview with The Slovak Spectator. “But then, when one falls in love and has a serious relationship, all the problematic issues just disappear. What remains is daily life with the joys and sorrows that is in no way different from the way of life of heterosexual persons.” With just one difference – that his partner for life is a man, not a woman.

Rebro believes that attitudes to non-heterosexuals in Slovakia are improving, especially among young, educated people from bigger cities. He does not feel discriminated against in his daily life, but he is aware that he belongs among the lucky ones, as he lives and works in an intellectual and cultural environment where the level of tolerance is higher.

“However, I don’t like the word tolerance, because it implies some arrogance – people should respect non-heterosexuals just like we respect heterosexuals,” Rebro said.

But the acceptance of non-heterosexuals by others is a challenge not only for the majority. According to Rebro, there are two extremes in the self-presentation of LGBT persons in society that he doesn’t like. On one hand it is the arrogance of some ‘wide-open’ gays and lesbians who think that everyone is obliged to present his or her sexual orientation in public, even with the risk that it can cause him or her problems in family or professional life. On the other hand, it is the hypocrisy of those who don’t need to make their sexual preference a secret because “everybody knows anyway and nothing really tragic can happen to them, but they are still able not only to deny it to themselves but also to calumniate other non-heterosexuals”.

“What irritates me the most, though, is the connection between the state and the [Catholic] Church, as well as the raised finger of the self-appointed pseudo-moral preachers – not only from among the Church,” he said, adding that this is one of the reasons for the discriminatory attitude towards LGBT persons in Slovakia.

Cases in which high representatives of the Catholic Church made discriminatory statements about non-heterosexuals are not rare in Slovakia. For example in early 2009, the Banská Bystrica bishop Rudolf Baláž said during his sermon that it’s nonsense to let homosexuals adopt children.

“Who has allowed us on the basis of the natural law to mutilate the future of a child?” the Sme daily reported Baláž as saying. Inakosť denounced his statements and asked for apology.

“The fact that the state does not want to recognise the value and importance of a life with a same-sex partner in the case of gays and lesbians pushes these bonds outside the law and thus supports the negative perception of gays and lesbians as promiscuous individuals,” Kolenič explained. Therefore, Inakosť calls for legislative measures permitting cohabitation by same-sex couples. According to Kolenič, sociological surveys show that Slovakia is ready for these changes.

A representative survey carried out by the Focus polling agency in May 2008 showed that the percentage of Slovaks who have no problems accepting the rights of non-heterosexuals is growing and reach almost half of the population now, the SITA newswire reported.

For instance, while in Slovakia LGBT persons are protected against discrimination in general terms by the constitution (the Constitutional Court in 2006 confirmed sexual orientation belongs among the constitutional characteristics that by no means can constitute grounds for discrimination), on April 1, 2009 the Swedish parliament voted in favour of a gender-neutral marriage law, which becomes effective on May 1.

According to the FRA, there is a need to act against discrimination and hate crimes.

“Regarding discrimination, we encourage member states to improve the existing equality legislation and to ensure that legally LGBT people are protected from discrimination in all areas of life,” Waltraud Heller, the spokesperson of the FRA told The Slovak Spectator. The newly proposed EU anti-discrimination legislation recently passed by the EP should be supported and, last but not least, existing legislation must be applied fully EU-wide.

Regarding hate crimes, two things are needed according to Heller.

“On the one hand, currently the criminal law contains provisions making it a criminal offence to incite to hatred, violence or discrimination on grounds of sexual orientation only in 12 EU member states, so there is scope for improvement,” Heller said.

On the other hand, very few incidents are reported to the police and therefore authorities are unable to act and many hate crimes go unpunished. According to Heller, a number of countries have introduced anonymous reporting mechanisms where a complaint can be made either via the internet or to independent bodies in which LGBT organisations are involved. These should also inspire other EU member states.

“At the same time, police officers in most member states must be better trained to indentify and deal with hate crimes,” Heller said.

The non-existence of legislative measures on the co-habitation of same-sex couples is the most frequent cause of discrimination of LGBT persons in Slovakia, according to Kolenič. The different types of discrimination include, for example, the fact that a non-heterosexual has no right to a day off for the funeral of his or her partner, no right to be informed about the health conditions of the partner, and no recognition in Slovakia of same-sex registered partnerships and marriages that were consummated in countries where they are allowed.

“It would be, for instance, interesting to see how the Slovak protocol would solve the situation if the Prime Minister from Iceland came for an official visit to Slovakia with her registered partner,” Kolenič told The Slovak Spectator.

Since same-sex partnerships are not officially recognised, the LGBT relationships acquire the status of something temporary and second-rate.

“It’s not true, because our personal relations are as equally important for our lives as for heterosexuals, and this is why we feel discriminated against,” Kolenič said, explaining why such legal acceptance is important for non-heterosexuals.

According to Heller, new laws are essential, but they are not enough.

“We must encourage broader attitudinal change among the public and facilitate greater understanding of LGBT issues,” Heller told The Slovak Spectator. Informing the wider public through campaigns is one way to foster the changes, but particularly important is how politicians and other public figures address LGBT issues, as it is proven that this has a major impact on public attitudes and behaviour.

“It would surely help a lot if the politicians started expressing themselves normally and, for example, publicly denouncing those who offend our minority,” Kolenič told The Slovak Spectator.