IN MARCH Slovakia’s jobless rate exceeded the two-digit limit, rising to 10.33 percent, a level which it had not reached for more than two years. Analysts and HR experts label the global economic downturn hitting Slovakia’s small and open economy as the main guilty party and say the outlook is not very rosy either. But as every cloud has a silver lining, HR experts find some positives even in the current situation. They list among them more realistic expectations on the part of employees and a bigger ‘supply’ in the available labour force as well as a chance for some companies to enhance their personnel after a period without enough labour. 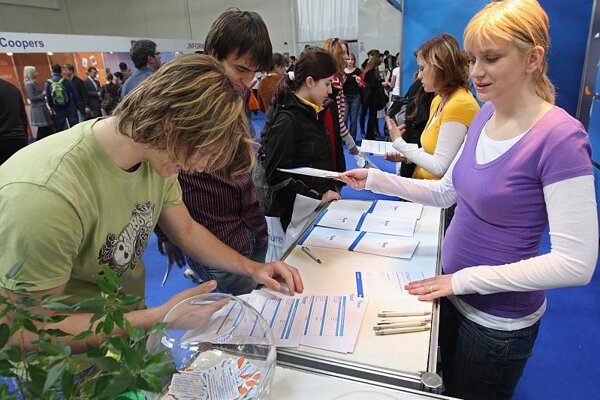 IN MARCH Slovakia’s jobless rate exceeded the two-digit limit, rising to 10.33 percent, a level which it had not reached for more than two years. Analysts and HR experts label the global economic downturn hitting Slovakia’s small and open economy as the main guilty party and say the outlook is not very rosy either. But as every cloud has a silver lining, HR experts find some positives even in the current situation. They list among them more realistic expectations on the part of employees and a bigger ‘supply’ in the available labour force as well as a chance for some companies to enhance their personnel after a period without enough labour.

“The current developments in the Slovak labour market can be perceived in two ways, positive as well as negative,” Luboš Sirota, the chairman of the board of directors of Trenkwalder, told The Slovak Spectator. “The growing unemployment dominates the negative one. When our analytical estimates warned at the beginning of the crisis about a threat of 50,000 lost job positions, we are now convinced that as a consequence of the crisis, as many as 100,000 people might lose their jobs, directly or indirectly. The development of unemployment during the first quarter of 2009 clearly indicates this.”

Among the positives Sirota sees is that companies which were just recently searching for qualified labour can now hire employees on the basis of quality. The most visible impact of unemployment is that expectations of new employees have become more realistic and that companies now can enhance their staff.

“If they had completed personnel audits, they were able, as a consequence of the crisis, to eliminate such phenomena as over-employment or low loyalty by employees. The crisis has also affected the turnover rate of workers which has fallen during the last few months in a positive way.”

Growth in wage levels, which was noticeable during the last few years, has slowed and fringe benefits have been reduced.

“The number of job hoppers has decreased as well, as most employees are focusing on keeping their jobs rather than changing them,” Dalibor Jakuš, director of Profesia, which operates the job portal of the same name, told The Slovak Spectator. “These changes in the labour market will remain after the crisis is over and we can thus expect the return of the labour market to the shape it was in before the crisis only after years at the earliest.”

According to Katarína Bittalová, an HR expert from Lugera & Makler, the crisis has already changed the labour market in that more clever employees have already started to increase their qualifications to become more competitive in the market. She also regards as clever those companies which have continued educating and training their employees.

In Slovakia, the automotive, machinery and textile industries and their suppliers have been most affected by the crisis and the jobless rate in these industries confirms this. The crisis is also further widening employment gaps between regions.

“The situation in those regions which were worse off up to October 2008, that is Košice, Prešov and Banská Bystrica, has worsened,” Bittalová told The Slovak Spectator. “The tendency for 2009 and 2010 is not positive either. According to official statistics, at least 35 jobseekers are applying for each vacancy. But we expect even worse, since layoffs have not bottomed out yet.”

A significant number of the new Slovak jobseekers are people who worked abroad until the crisis there sent them home. Slovaks have returned from Hungary, the Czech Republic as well as Great Britain and Ireland, and most of them worked in manufacturing, for example, in the automotive, machine or electro-technical industries, according to Sirota. But people who had worked in services or construction have also returned to Slovakia.

Bittalová estimates that as many as 60 percent of the new jobseekers are people who had worked abroad.

“I think that the intensive boom of new jobseekers is over,” she told The Slovak Spectator. “But since February we are seeing the inflow of jobseekers from positions such as operators and craftsmen or from customer service and logistics, but also from banks, information technology and health care. Foreign countries no longer represent for Slovaks such a good way of living as they did in 2008.”

This is also shown by a one-year drop of 50 percent in Slovaks' interest in jobs in Great Britain, according to Jakuš.

The crisis has been changing the labour market and companies are responding to it in various ways depending on their size and core business. Some companies immediately reduced their workforces to cut costs while others are looking for ways to keep their qualified labour or use the current downtime for more education and training.

“Slovakia, also in this case, turned out to lack experience,” said Sirota. “At the moment when the crisis hit, employers rid themselves of their most flexible labour force – for example leased workers. In countries where alternative forms of employment have a longer tradition, in contrast to Slovakia, these flexible forms of employment are used during crises.”

Sirota believes that forms of employment will undergo a huge change. He sees personnel leasing as one of the fastest indicators of changes in the labour market.

“When the crisis burst out and companies were getting rid of their temporary employees, we were saying that these will be the workers who will return to companies first,” he said. “And today this is already happening. Employers prefer, in uncertain times, flexible and lower-paid workers. It is impossible to predict developments in the labour market or in the whole economy towards the end of the crisis. The increased interest in workers employed on the basis of personal leasing is the first signal that the economy, even though slowly, is again reviving.”

According to Bittalová, companies facing the question of what to do with their full-time employees when there is not as much for them to do have reached for various solutions.

“Large companies such as steelmaker US Steel Košice or carmaker Volkswagen have preferred shortened working time and eliminated agency workers,” Bittalová told The Slovak Spectator. “Others have tried to change employment contracts after an agreement with employees. We also are registering companies which have an increased interest in leasing workers as this form is more interesting for them at the current time than paying a full-time worker.”

Jakuš agrees that the crisis has made the labour market more flexible.

“This is why we see more part-time work contracts and it is possible that there will be more alternative forms of employment – jobs on contract or self-employment,” said Jakuš. “If the legislation is not changed, we also expect that after improvement in the economic situation, agency employment will grow as well.”

Government measures have yet to bear fruit

HR experts addressed by The Slovak Spectator share the opinion that the measures adopted by the government of Prime Minister Robert Fico have not so far brought any visible positive effects in the labour market and they expressed doubt about whether they will do so in the future.

“So far no measures which would have a visible influence on the market have been adopted,” said Jakuš. “During roughly four months the unemployment rate went backwards by several years and no improvement in the situation is observable.”

These HR experts continue to call for a reduction in payroll taxes, a measure they say would help the economy as a whole.

“The crisis is still perceived as a crisis of the private sector,” Sirota of Trenkwalder told The Slovak Spectator. “If the government adopts the idea of stimulation of the business environment and increasing the competitiveness of the labour market via a reduction in the burden of compulsory levies, this might be the most key measure which Slovakia needs in its specific situation.”