Getting back to work

AN INCREASING unemployment rate is not the only problem in Slovakia’s labour market. Along with low geographical mobility and insufficient life-long education, Slovakia suffers from long-term unemployment, when people remain without a job for months or even years and begin to lose their working habits. Some of these unemployed have lost their motivation to work and companies are not often prone to seek out such people as their working behaviour is unpredictable or unknown. Now, with the impacts of the global economic downturn making Slovak employers more cautious, it is even more difficult for the long-term unemployed to find work. 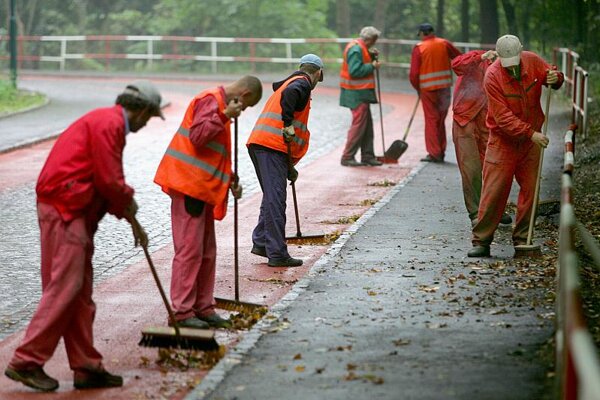 AN INCREASING unemployment rate is not the only problem in Slovakia’s labour market. Along with low geographical mobility and insufficient life-long education, Slovakia suffers from long-term unemployment, when people remain without a job for months or even years and begin to lose their working habits. Some of these unemployed have lost their motivation to work and companies are not often prone to seek out such people as their working behaviour is unpredictable or unknown. Now, with the impacts of the global economic downturn making Slovak employers more cautious, it is even more difficult for the long-term unemployed to find work.

One possible way to help these people in rebuilding their working habits and bringing them back into the pool of people able to work is to launch social firms. The purpose of these firms is to create employment for marginalised and disadvantaged people and to help them to integrate socially as well as economically. Slovakia already has some experience with supported employment and the government has intensified support for such programmes because of the economic downturn.

“A huge problem for the Slovak labour market is the perception of unemployment as something normal and not something that a person should feel ashamed of – an impetus to seek not being unemployed,” Michal Páleník, the project manager at the Employment Institute, a non-profit, non-governmental organisation, told The Slovak Spectator. “This is a sociological problem when there are some villages in which those who work are considered abnormal and those who do not work are thought to be normal. This is certainly not good.”

At the end of March, a total of 110,767 Slovaks had been without a job for more than one year, according to statistics from the National Labour, Social Affairs and Family Office (ÚPSVAR). This meant that one-third of the unemployed in Slovakia had been jobless for one year or more. Compared to the end of 2008, this was an increase of 2,470 persons.

Of the total number of long-term unemployed, ÚPSVAR registers 52,564 of them as having been without a job for more than four years.

The highest number of jobseekers failing to find work for more than 12 months, along with the highest current jobless rates, is in eastern and central Slovakia. In March, the largest number of long-term unemployed was in Košice Region, accounting for 27,186 of the 62,072 jobseekers in this region. Banská Bystrica Region followed with 26,832 persons without work for more than 12 months out of a total of 59,463 unemployed, and Prešov Region had 26,759 long-term unemployed out of 65,841 jobless people.

In all other regions of Slovakia - except Nitra Region, where the long-term unemployed remained at 11,560 people – fewer than 10,000 people had been without a job for more than 12 months. Bratislava Region registered the lowest number of long-term unemployed, with 1,430 persons.

The task of social firms is to create an ‘interim’ labour market in which those who are socially disadvantaged with low labour productivity can find a job, because in the formal labour market they have little chance to do so, Páleník told The Slovak Spectator. In a social firm they can learn or re-learn working habits or gain some current work experience.

But there is a danger that social firms may unfairly compete against employees and employers in the regular labour market.

“Social firms cannot ‘steal’ workers from regular companies,” Páleník said. “They must focus on disadvantaged persons in whom regular companies are not interested. They must not sell their products at a discount and thus push other companies out of the market. There is a risk that when such firms are subsidised they might produce more cheaply than companies operating within the normal business environment.”

Ideally, they also should not operate in the same market with normal companies.

“For example, when there is a locksmith in a village it is nonsense to place a social firm there employing locksmiths,” said Páleník. “If social firms operate in such a way that they liquidate other firms they will change nothing in the labour market.”

In general, social firms should employ people for whom there is no demand in the regular labour market and they should manufacture products or provide services which cannot be sold at prices that compete with the prices of a commercial company, said Páleník.

Social firms are not expected to generate profit or, when they do, it should be re-invested into their further development or their employees.

While social firms are sometimes considered ‘expensive affairs’, Páleník of the Employment Institute thinks that the expenditure for such firms should be compared with the amount that one unemployed person costs the state.

When calculating budgets for social firms, the Employment Institute regards social firms’ expenditures as a mid-term investment, for example for three years. Thus expenditure of €12,500 for one person trained and employed in a social firm is advantageous for the public finances.

The concept of social firms has been known abroad for years, according to Páleník. Slovakia already has some experience from when it launched a model of supported-employment agencies which focused primarily on helping disabled people. After the source of funds dried up, this model disappeared.

According to Páleník, both supported-employment agencies and social firms need a certain amount of subsidy because such an entity is always ‘starting over again’. A social firm cannot develop and retain its own labour force because the principle of the social firm is to employ and train people: when they learn how to work and get some good working habits and skills, they must leave the social firm and make their own way in the labour market.

The government of Prime Minister Robert Fico, which also views social firms as a tool to fight the impacts of the crisis, has approved, within its crisis packages, measures to support employment of disadvantaged jobseekers in social firms.

These firms should address regional unemployment differences through an easing of the legislative requirements for creating social firms, according to Barbora Petrová, spokesperson of the Ministry of Labour, Social Affairs and Family.

For example, within the adopted crisis measures, social companies are not now obliged to show that they have used 30 percent of their net earnings for the creation of new work positions. Moreover, municipal bodies, other local administration bodies and their organisations are no longer bound to the minimum limit of 30 percent of the jobs in social firms being filled by disadvantaged job-seekers.

The ministry hopes that social firms will employ 10,000 people annually. In 2009, the average annual state contribution for each position in a social firm is €3,303, while the total funds approved for the measure are €33 million. In 2010, the annual subsidy for each job position will increase to €5,102 with a total budgeted amount of €61.3 million. Additional state funds are allocated to help social firms cover the costs of training. The allocated sum amounts to €70.2 million for 2009; next year this will decrease to €64.6 million.

Eight pilot social firms were established last year. They have so far received €5.4 million in advance payments, according to Petrová.

These measures have already attracted some criticism. Critics view the social firms as non-transparent, expensive and not accomplishing their primary tasks.

“The social firms mostly operate in areas already occupied by private investors,” Radovan Ďurana of the Institute of Economic and Social Studies (INESS), an economic think tank, told The Slovak Spectator. “A subsidy for jobs in social firms creates artificial competition for these private companies which, de facto, endangers existing jobs, particularly in areas of production with lower added value.”

Ďurana also thinks that social firms motivate state or local authorities to engage in business even though they often have no business experience. Moreover, he thinks that engaging in business should not be within the remit of the public administration. He warned that easing the conditions for the launch of social firms could be at odds with the original idea behind them.

“It is possible to solve the problem of employment of disadvantaged people more effectively, for example by reducing the payroll taxes of such employees,” Ďurana said.